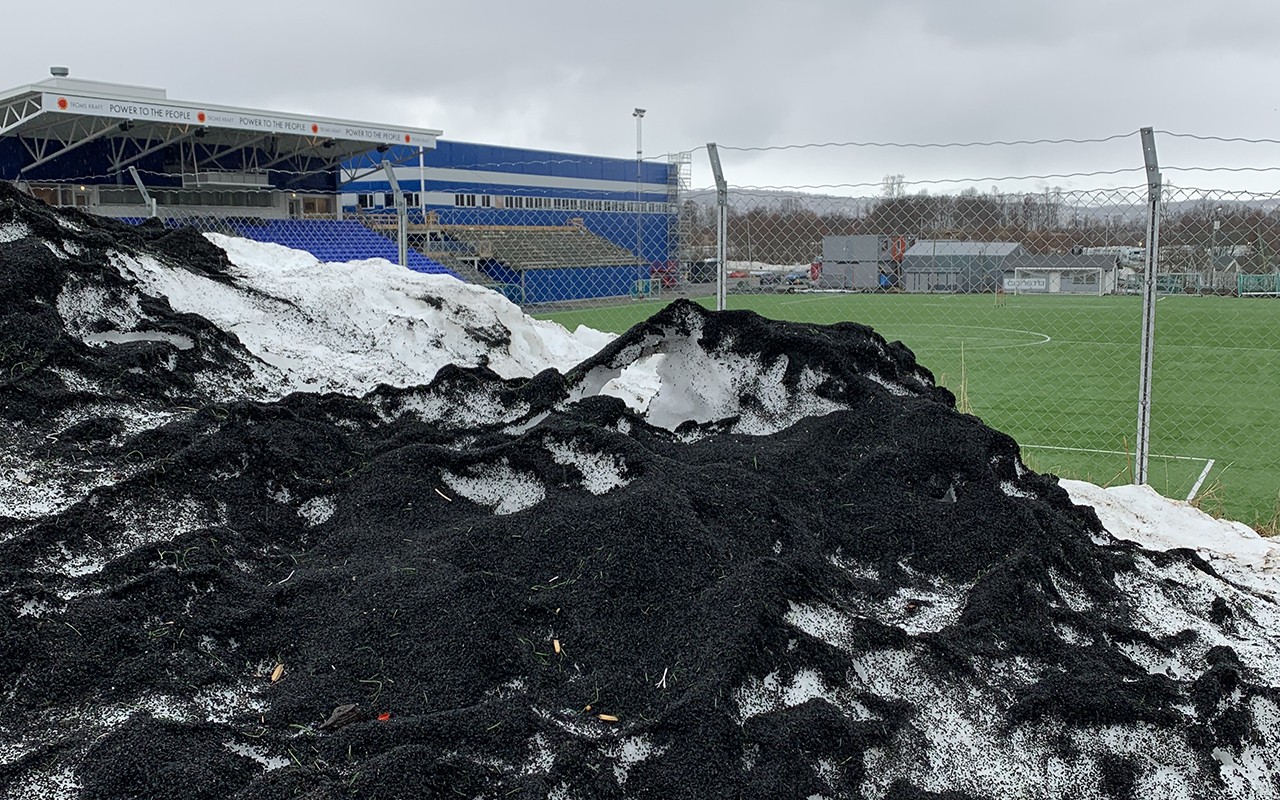 A toxic cocktail in the ocean – chemicals from car tyre granules

Norwegian playgrounds and artificial turf pitches are a source of pollution in the sea. Scientists have now worked out how much and how toxic rubber granules can be.
Read in Russian | Читать по-русски

In Norway, we often use rubber granules produced from discarded car tyres for artificial turf pitches and to cover playgrounds and walkways. The reason is that they help the artificial turf to stand up, and that they provide a softer foundation that reduces injuries to the players.

In addition to rubber, the car tyres also contain a cocktail of chemicals such as fillers, stabilisers, pigments, oils, resins and a variety of other organic compounds and heavy metals that can leach into the environment.

The project has been a collaboration between NILU, Akvaplan-niva and SINTEF Ocean, and the study is funded by the Fram Centre’s flagship Pollutants – effects on ecosystems and health, project number 1002018.

A new study conducted under the auspices of the Fram Centre shows that this type of rubber granules contains an extensive mixture of organic chemicals such as PAH, phthalates, benzothiazoles, bisphenols and heavy metals. This cocktail of organic additives and metals leaks out into seawater from the rubber granules and this entails high concentrations of benzothiazoles and zinc, as well as detectable levels of PAHs and phenolic compounds in the leachate.

The findings of the study are published as part of research topic Biogeochemistry of Anthropogenic Particles in the journal Frontiers in Environmental Science.

Phenol is an organic compound consisting of a benzene ring and a hydroxyl group. The substance is corrosive and toxic. Phenol can give up an H⁺ ion from the hydroxyl group and thus becomes an acid.

Where does it end up?

«Previous studies have mainly investigated leaching from rubber granules in soil and freshwater,» says Dr. Dorte Herzke from NILU. She is a co-project manager in the study, and co-author of the recently published scientific paper.

«But much of this rubber also ends up in coastal marine environments in Norway, thanks to tyre wear on roads, snow removed from artificial turf pitches and drains from washing machines where players’ clothes have been washed,» says Herzke.

Ports in the sea

Co-author of the article, Dr. Claudia Halsband, from Akvaplan-niva, elaborates:

“Previous studies have mainly investigated effects from rubber granules on land and in fresh water. However, a large proportion of the rubber granules used in Norway end up in the marine environment. This applies to both car tyre wear and snow containing rubber granules removed from artificial turf fields and other artificial surfaces. This was the background to our wanting to investigate whether rubber granules can contaminate seawater, and whether this pollution is toxic for marine organisms.”

How dangerous is it?

«Today we know that rubber from car tyres is one of the most significant contributors to microplastic pollution in the oceans. For this reason, we wanted to investigate whether rubber granules can contaminate seawater, and whether it is toxic for marine organisms. We put together a research team with colleagues from SINTEF Ocean – Dr. Lisbet Sørensen and Dr. Andy Booth, to investigate the chemical cocktail in the rubber granules and in leachate from these”, says Halsband.

«We were surprised by the high incidence of chemicals in these rubber particles that are used in sports and playgrounds both indoors and outdoors», says Herzke.

What sort of quantities are we talking about here?

“From Norwegian artificial turf fields, 65 tonnes of granules disappear annually on clothing and shoes, which corresponds to approximately 10,000 used car tyres. Most of this ends up in the sea because it is flushed away after machine washing. 3,200 tonnes disappear annually with regular use, mostly in connection with snow clearing and drains”, Herzke reports.

During its effective lifetime, a car tyre loses approximately 1 kg of rubber onto the roads and into the wild.

“To understand the impact on marine organisms, we exposed copepods – a type of small crustacean, typically 1-2 mm long – to a wide range of leachate concentrations diluted in seawater. The leaching was toxic at high concentrations, shown by high mortality of the copepods within a couple of days. However, very low concentrations did not lead to mortality; they seemed to be tolerated by the organisms, at least in the short term», says Halsband.

«The problem is that we do not currently know the concentration of particles that are derived from rubber granules and general tyre wear along the Norwegian coast. But we know that these particles behave like other microplastic particles in the environment; they will remain for many, many years and slowly degrade to smaller and smaller particles.”

We have to find alternatives

What do you think can or should be done to limit the amount of rubber granules in the sea?

«There are some measures we can take and ideas we have on how to prevent emissions of rubber granules from artificial turf fields, or they can be replaced with more environmentally friendly alternatives. But, it’s difficult to avoid tyre wear on the roads. To solve this, research, industry and the authorities need to keep on working on developing appropriate measures», concludes Claudia Halsband.