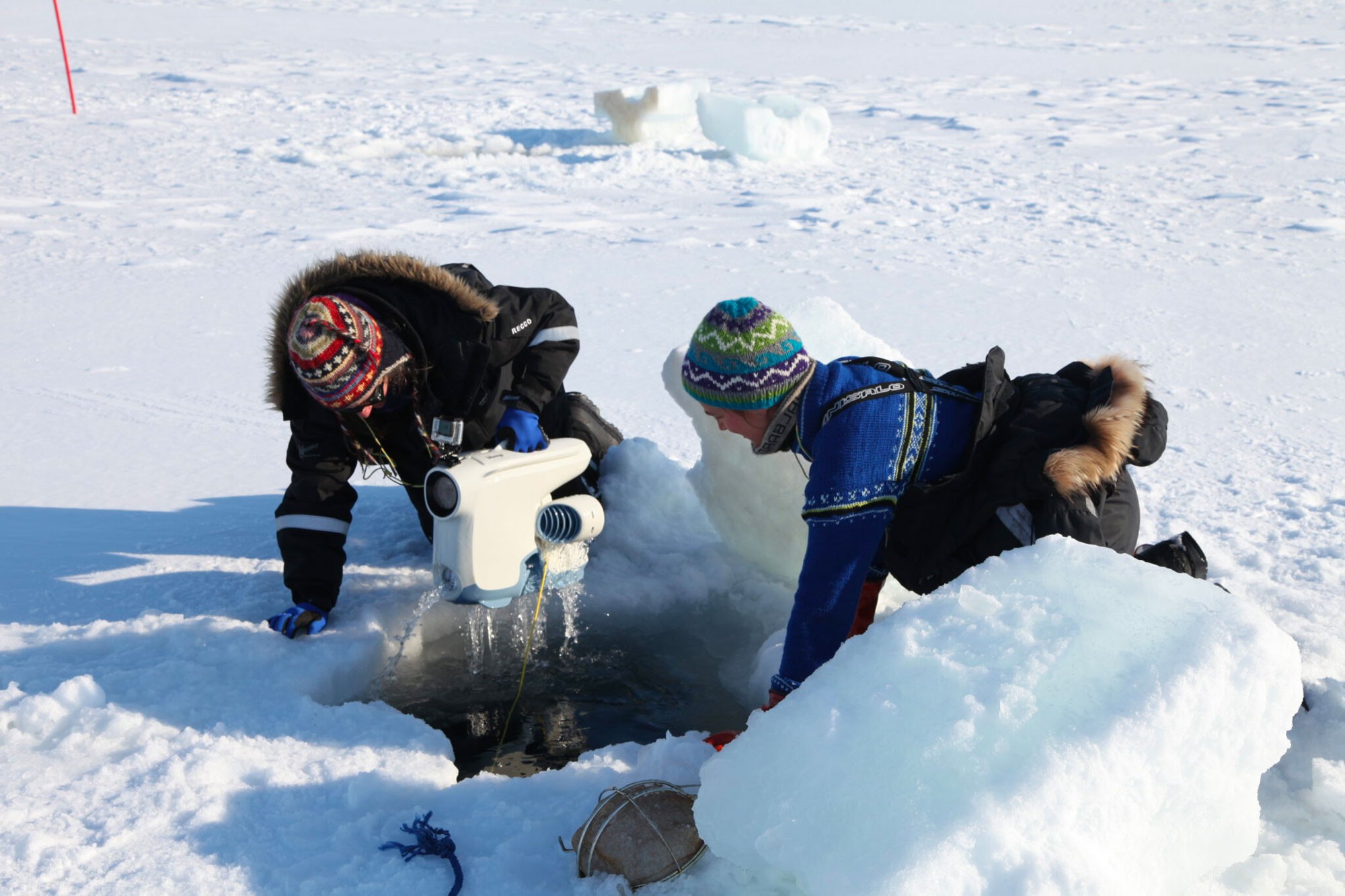 Arctic environments are changing rapidly. Clearly this poses challenges to ecosystems, but we do not yet understand the consequences in their full complexity. However, we know that the first response to sea ice decline, ocean acidification, and warmer waters happens at the level of unicellular algae.

Algae are photosynthetic organisms that use sunlight to build up organic material from CO2 and water. By doing so they form the basis for the marine food web. In the Arctic, these organisms face great challenges due to the complete lack of sunlight during the polar night. Even when the sun returns in spring, the seasonal presence of sea ice restricts the amount of light that enters the water column. As a result, it is only during rather short periods of the year when there is both enough light and an adequate supply of nutrients that we see algal blooms. Many other organisms in the Arctic have tuned their life cycles towards this important food resource. Since algal growth is strongly controlled by environmental conditions, it is evident that climate-induced changes in the environment will affect algal blooms.

In ice-covered Arctic waters, the first algal bloom upon the sun’s return in spring occurs in the lowermost part of sea ice, close to the ice-water interface. In the ocean this marks the transition from winter to spring, usually occurring long before there are any signs of spring on land. Despite extreme conditions, the microscopic meltwater channels in this part of the ice offer a stable habitat for specialised unicellular algae. Sea ice algae are optimised to take advantage of very low light intensities, and their production is usually light-limited through most of their growing season.

Snow lying on top of the sea ice absorbs much more of the incoming sunlight than the ice itself, but once the snow starts melting, more light is transmitted, and other unicellular algae (phytoplankton) start blooming in the water underneath the ice. The timing of these two blooms is of great relevance for small crustaceans that feed on algae, including the copepod Calanus glacialis. These animals (and their sibling species) are central in making the biomass produced by algae available to animals further up in the food chain.

During the past four years, we have studied Arctic algal blooms in sea ice and water in the FAABulous project (see box) with many colleagues from the ARCTOS network (see article about ARCTOS on page XX), and other national and international partners. We focused on two fjord systems in Svalbard with contrasting characteristics, where we studied the seasonal development of environmental conditions and algal blooms. Due to the remoteness of these fjords, we used autonomously deployed instruments that provided continuous data, as well as numerous field campaigns for collecting samples.

Kongsfjorden, a fjord at 79°N that has been largely ice-free for the past decade and is strongly influenced by warm Atlantic water from the West Spitsbergen Current, represented a laboratory for a future climate scenario. The other fjord, Van Mijenfjorden, located further south along the west coast of Spitsbergen, is much more isolated due to an island blocking most of its opening. Hence, it is usually still covered with sea ice up to 4-5 months every year.

During our continuous study from September 2015 to August 2016 we found that the phytoplankton bloom started earlier in the ice-covered system, but algae biomass accumulation was slower. The ice-free Kongsfjorden had higher nutrient levels over a longer period and therefore supported a longer bloom and higher overall biomass production. We observe different groups of algae during different phases of the bloom development, and not all of them are of equally high quality as food for grazers.

When comparing the two fjords, we found a surprisingly high overlap of species. The most distinct difference was that the early-spring community under the sea ice in Van Mijenfjorden was dominated by pennate diatom species. These species are usually associated with sea ice and were not found in Kongsfjorden. 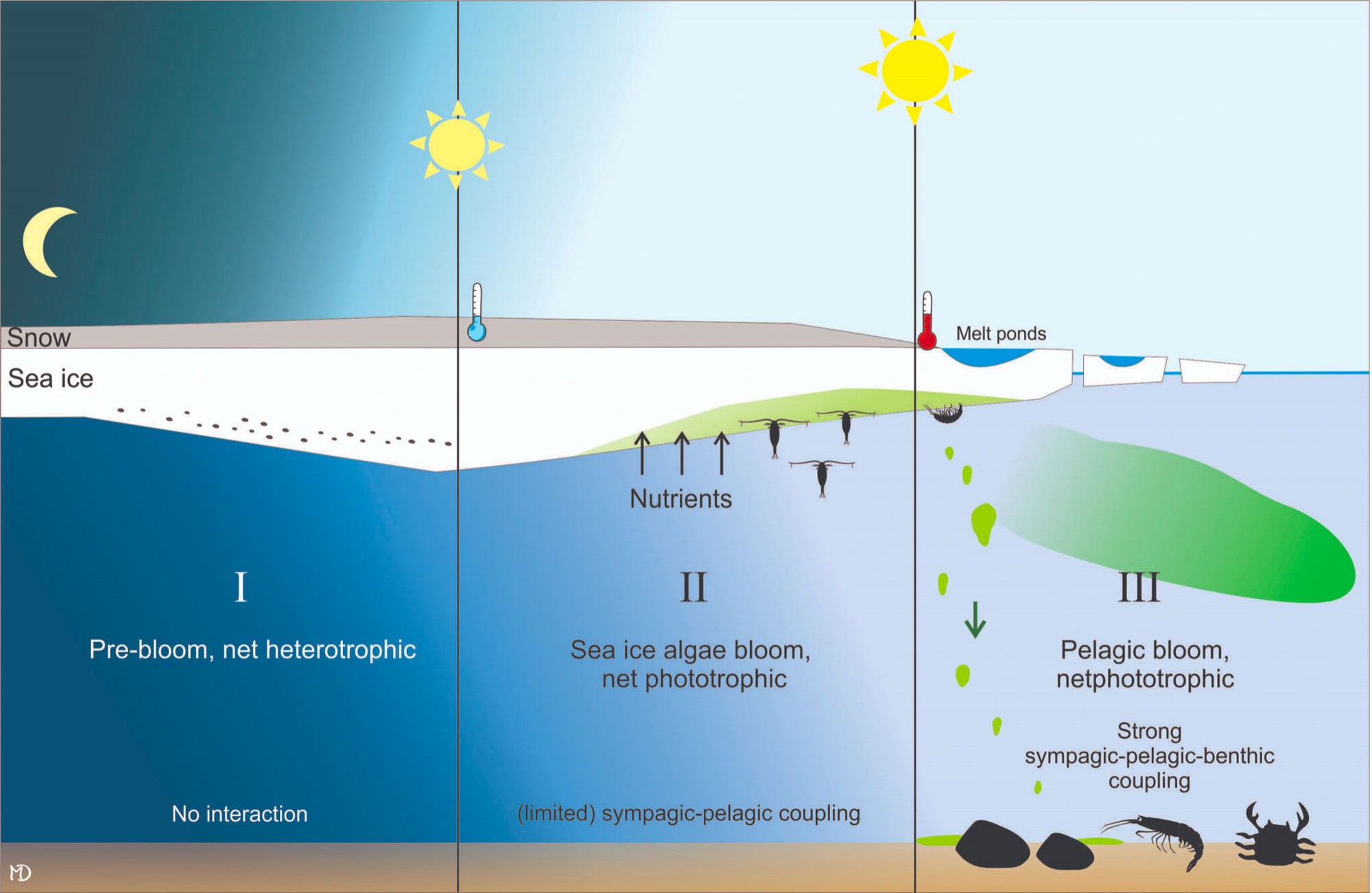 When comparing the spring blooms in Kongsfjorden during three consecutive years (2016-2018), we found considerable differences in species composition between the years, which can be attributed to physical conditions. Huge interannual variability in the timing of phytoplankton spring bloom in Kongsfjorden has also been shown by measurements spanning a decade (2003-2013).

Apart from suitable environmental conditions, the initiation of a spring algal bloom is dependent on the presence of a viable seed population of algal cells that have survived the winter and are ready to start photosynthesis once they are re-exposed to sunlight. This overwintering of microalgae is only partly understood by scientists. We knew that very few algal cells are present in surface water during the polar night, and many of those few do not rely solely on photosynthesis. However, we knew nothing about their physiological state, or whether and how quickly they could resume active photosynthesis and growth.

To test this, we sampled natural phytoplankton communities in surface waters in January and December and measured their physiological state in darkness, as well as after re-exposure to different light intensities in the laboratory.

These experiments revealed that the algal cells had almost completely functional photosynthesis systems even after several months in very dim light. In situ incubation experiments in the fjord proved this level of light to be insufficient for net primary production. Upon re-exposure to light in the laboratory, however, the algae were capable of acclimating to a range of different light intensities within only 24 hours. This confirms that they would be able to start photosynthesis almost immediately when exposed to light.

Climate change is likely to alter the relative contributions of sea ice algae vs phytoplankton to primary production. Since these two blooms occur at different times and in different habitats, they are also primarily consumed by different groups of grazers. Changes in their relative importance, therefore, create potentially cascading effects through the food web. We performed experiments with natural communities and single-species cultures to study both groups‘ responses to an increase in light and also ocean acidification, which we expect to see in the future.

Our results indicate that phytoplankton is better adapted to take advantage of higher light intensities and increase its production accordingly. Sea ice algae, on the other hand, appear much more vulnerable to high light and lower pH (ocean acidification) and seem destined to be the losers under future Arctic climate scenarios. Animals that rely on ice algae will, therefore, face challenges under future conditions.