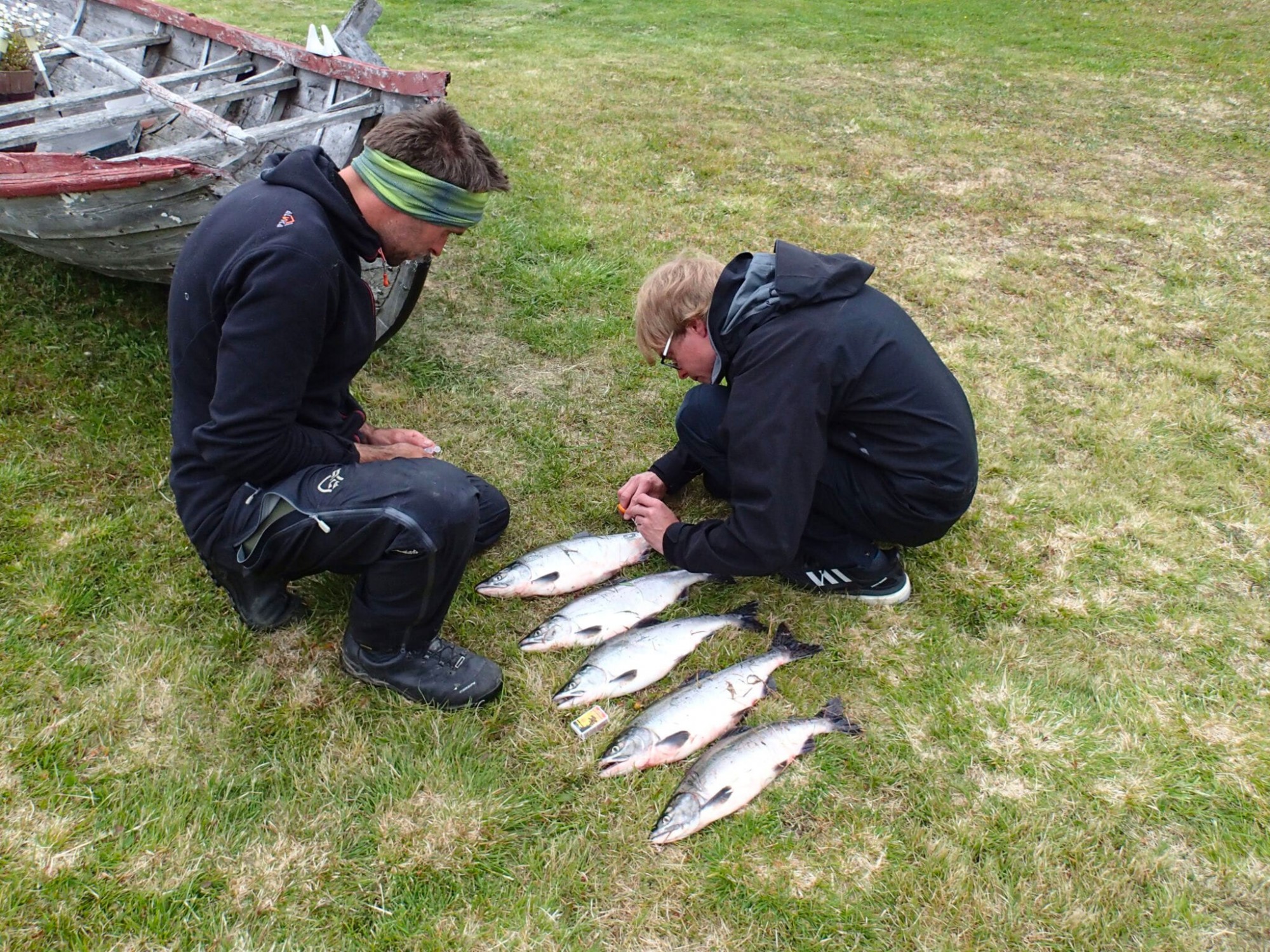 Although we humans have blacklisted them, a number of animals benefit from the fact that they swim up Norwegian rivers. Perhaps pink salmon are not the villains you thought they were?

What impact do pink salmon have on the ecosystem? Grzegorz Wierzbinski and Antti Eloranta are studying the catch. Photo: Kathy Dunlop

It began in the 1950s when pink salmon were released in Russian rivers on the Kola Peninsula. Under the Soviet system of government, the introduction of new species was seen as a positive initiative. Another example is the king crab. Pink salmon is the most numerous of the Pacific salmon species and a crucial resource for fishery enterprises. This was why it was released, and repeated on several occasions, until the late 1990s.

But like the king crab, pink salmon don’t respect national borders, which has resulted in an invasion of them into Norwegian rivers in recent years.

In a project funded by the Fram Centre’s research programme, Climate Effects on Terrestrial Ecosystems, Landscapes, Communities, and Indigenous Peoples, a group of scientists has studied the effects of pink salmon on ecosystems.
In two different studies, researchers conclude that when pink salmon swim up rivers, it means more food for scavengers, fish, and birds.

“The results of both studies are beginning to provide us with information about the ecological impact in Northern Norway of the nutrients and energy from pink salmon and their eggs. We expect the presence of pink salmon in Norway will have both winners and losers, both in terrestrial and freshwater ecosystems,” says Katherine Dunlop, Researcher at the Institute of Marine Research.

In 2017, pink salmon were caught in more than half of the salmon-bearing rivers in Norway, and many were reported in 2019 as well. According to the IPBES, the proliferation of such invasive species is one of the main causes of declining natural diversity globally, the Norwegian Environment Agency states.

The Scientific Committee for Food and the Environment maintains that large pink salmon stocks will increase the likelihood that pink salmon spread disease organisms to wild salmon and farmed fish.

Naturtjenester i Nord – a nature conservation service in Northern Norway that participates in the research and has been monitoring Norwegian rivers for more than twenty years – registers an increase.

Field studies were done along Vesterelva in Finnmark County. This is a small river that flows into the innermost part of the Varangerfjord. It is a well-known fact that there are large stocks of pink salmon in this river in odd years. The fact that Vesterelva has a waterfall is beneficial from a data-collection perspective because pink salmon do not seem interested in migrating upstream in heavy currents or rivers with powerful waterfalls.

This made it possible for scientists to use the upper part of the river as a controlled ecosystem that is not affected by pink salmon.

These are the first pink salmon studies ever conducted in Northern Europe, and they provide information about various mechanisms at play and they quantify the transfer of energy and nutrients from saltwater to freshwater. The findings are comparable to research done in the United States.

“Not surprisingly, we saw many results in the Northern Norway research that is similar to what we’ve seen in our studies in Alaska. Many animals, including aquatic invertebrates, seem to benefit ecologically from the fact that pink salmon swim up the rivers,” says Professor Mark S. Wipfli, University of Alaska Fairbanks (UAF).

Pink salmon have both positive and negative impacts

From the original natural habitats of pink salmon, it is known that the marine nutrients brought upriver by Pacific salmon can have a positive effect on both terrestrial and freshwater ecosystems. Terrestrial animals, such as bears, foxes, and birds, eat the spawning and dying fish. The increased access to nutrition increases the growth of microalgae, bottom fauna, etc., in rivers, and fish fry helps themselves to the highly nutritious pink salmon eggs.

The studies were conducted by researchers from:

This last point is particularly interesting for our Norwegian salmon species because winter in the far north often entails varying degrees of hunger due to short days, low production, and scarce prey. Being able to build up good reserves of fat in autumn would greatly benefit our native salmon species, and a higher supply of nutrients from pink salmon eggs can be a good source of nutrition.

“Our results showed that the high-energy eggs of the pink salmon have yet to become an important dietary element for most salmon juveniles, but pink salmon are probably here to stay, which means they will continue to be a source of high-energy food for mature salmon,” Kathy Dunlop says.

“Although we mostly saw positive effects of pink salmon in our studies in Norway, concerns about disease transmission, competition, oxygen depletion from dead and rotting pink salmon and other issues need to be investigated in more detail to understand the entire scope and long-term impact of pink salmon in Norwegian rivers,” Mark Wipfli says.

As mentioned, Vesterelva river has a waterfall that pink salmon do not appear to ascend.

But the scientists are aware of the fact that pink salmon can migrate hundreds of kilometres up some of Norway’s long peaceful rivers.

“Pink salmon have an enormous proliferation potential, but one should not disregard some of the potentially positive effects this could have in a few waterways, as the study shows. But even if pink salmon are a source of energy for other organisms, this could increase the number of scavengers and vermin. For example, mink and otter will be increasingly attracted to waterways with large stocks of pink salmon, and it might be possible to see how the formation of pink salmon stocks changes ecosystems,” Rune Muladal says