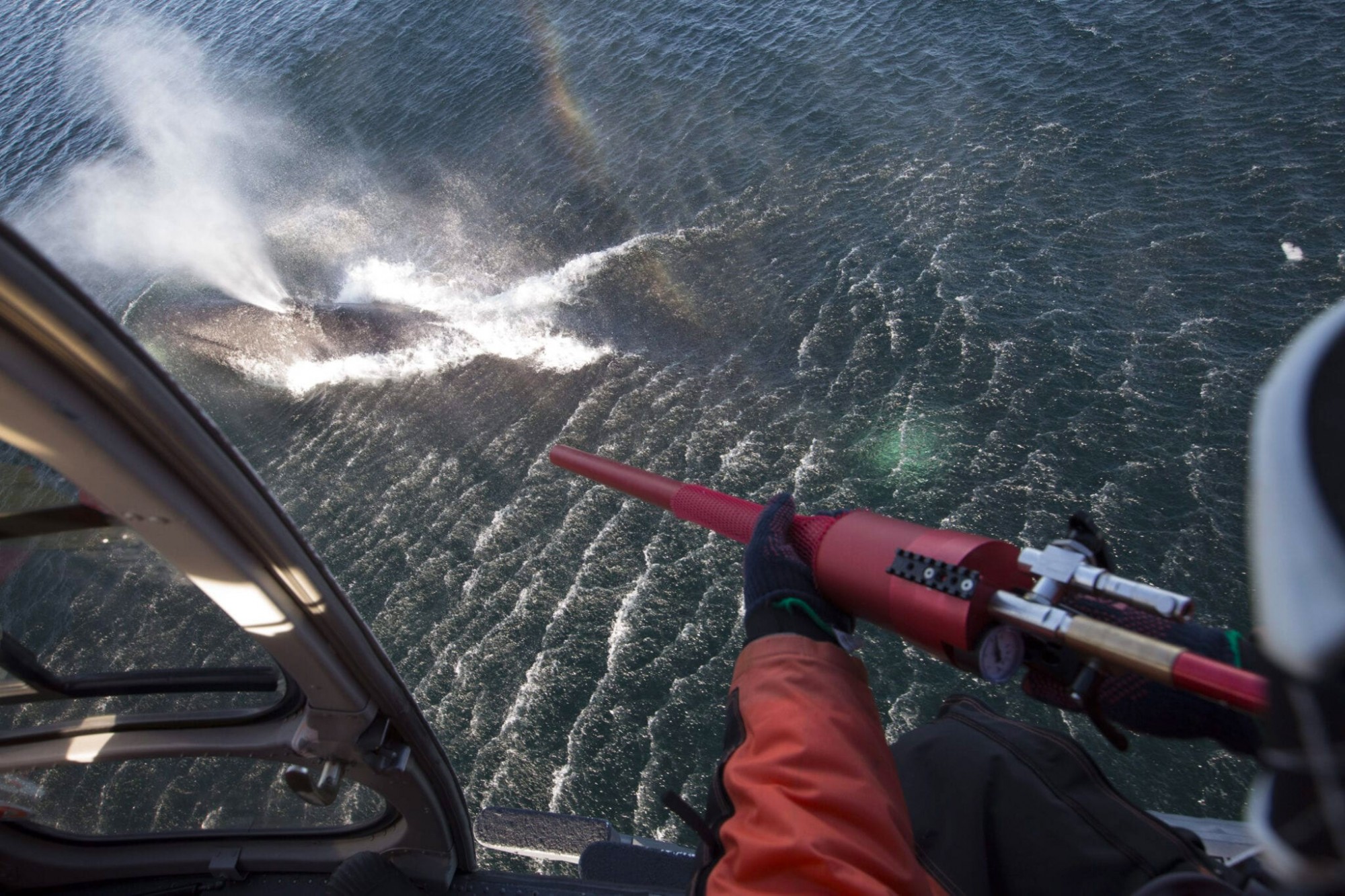 "Larger areas of ocean in the Arctic must be protected"

Climate change and increased human activity are threats to marine mammals living in the Arctic.

This is how researchers can track whales. A projectile is shot from a helicopter that attaches itself to the blubber of a bowhead whale. A radio transmitter is attached to the projectile that sends information about the whale’s location. The signals are intercepted by satellites. Photo: Nick Cobbing.

By compiling results from tracking studies of most marine mammal species occupying the waters around Svalbard, a diverse international research group has created a very good overview of habitat usage by these highly mobile animals. The research group includes researchers from the Norwegian Polar Institute, the Institute of Marine Research, and The Arctic University of Norway (UiT). The researchers use the phrase ‘hotspots’ to describe the areas most commonly used.

It is in these areas that marine mammals find their food, mate, grow up and rest. In order to survive, the animals are completely dependent on such hotspots in Arctic waters, which experience vast amounts of seasonal and interannual variation. These same areas are often hotspots for seabirds and animals lower down in the food chain as well.

Marine mammal hotspots in the Greenland and Barents Seas

The species of animals that were studied were ringed seals, bearded seals, harbour seals, harp seals, walruses, hooded seals, polar bears, narwhals, bowhead whales, humpback whales, beluga whales, fin whales and blue whales. Between 2005 and 2018, a total of 585 individuals were tagged with satellite transmitters. This enabled researchers to gain a very good overview of where the animals spent time. Some of the data in this paper are novel, while other data has been spread in various publications. This new study compiles all the available marine mammal tracking results from the whole region. Advanced technology and analytical tools have been used in the work. This provides a foundation on which to give clear advice regarding the management of the waters around Svalbard and along the northern ice edge.

«The comprehensive data material shows in an excellent way how the different animals are moving, both in overlapping and new areas over a year», says Audun Rikardsen, professor at UiT – The Norwegian Arctic University.

«The data series gives us complete and unique data about vulnerable areas for these mammals. It is crucial to assess how human activity can affect the various species seen in context, also since climate change is particularly noticeable in precisely these areas. That is why future studies will be carried out in a similar way where large data sets are combined from many research teams, to better tell the importance of seeing the connection between several species over large areas» says Rikardsen.

“The marginal ice zone of the Greenland Sea and the northern areas of the Barents Sea, the waters around Svalbard and a few coastal areas in Northeast Greenland were identified as key hotspots for marine mammals and areas with a great diversity of specie.” Says Christian Lydersen, a senior researcher at the Norwegian Polar Institute and one of the authors of the study. Lydersen is also one of the key researchers in several of the field studies that provided the data for this study.

This article should provide a good foundation for managers that are attempting to determine locations for marine protected areas. However, it is challenging given that the marginal ice zone  is clearly a ‘hotspot’ and this area is very dynamic, changing it location both over short and longer time-scales. This will require new thinking in terms of area management related to our ocean areas”

The study was carried out by a group of international researchers and was funded by the Research Council of Norway, the Norwegian Polar Institute, the Fram Centre, the Norwegian-Russian cooperation on the marine environment, the Bureau of Mineral and Petroleum (Nuuk, Greenland), the Danish Ministry of the Environment and the Institute of Natural Resources in Greenland.

Everything is connected. The new study describes a number of threats to life in Arctic waters.

Climate change is most noticeable in the Arctic. Measurements show that there are no other areas on Earth where the increase in temperature is greater.

Warmer oceans and winds are resulting in less and less sea ice. This is disastrous for a number of the species mentioned in the study. For example, the ringed seal is completely dependent on sea ice, which is where it gives birth and raises its young. If this species disappears, polar bears will have trouble finding food. Ringed seals are the polar bears’ most important prey, and perhaps it was this species that originally enticed the first brown bears to wander out onto the sea ice, and which led to the polar bear evolving as a species.

“Without ringed seals, and at least without sea ice, the polar bear faces an uncertain future. At the same time, polar bears in our part of the Arctic also depend on land because they make dens in snow drifts where they give birth to their cubs in the winter. This makes Svalbard, with its good denning areas, with lots of drifting snow despite low precipitation in this Arctic desert, a hotspot for the species. In addition, polar bears also find most of their food along in the marginal ice zone”, says Jon Aars, who is the lead polar bear scientist at the Norwegian Polar Institute.

Human industrial activities, such as shipping, oil and gas extraction, minerals exploration and extraction on the seabed, tourism and fisheries are the other major threats to marine mammals in the Arctic.

“On and around Svalbard, high levels of some man-made pollutants also represent threats to marine mammals in the area. These compounds reach the Arctic via ocean currents and air currents, especially from industrial areas in Europe”, concludes Jon Aars.