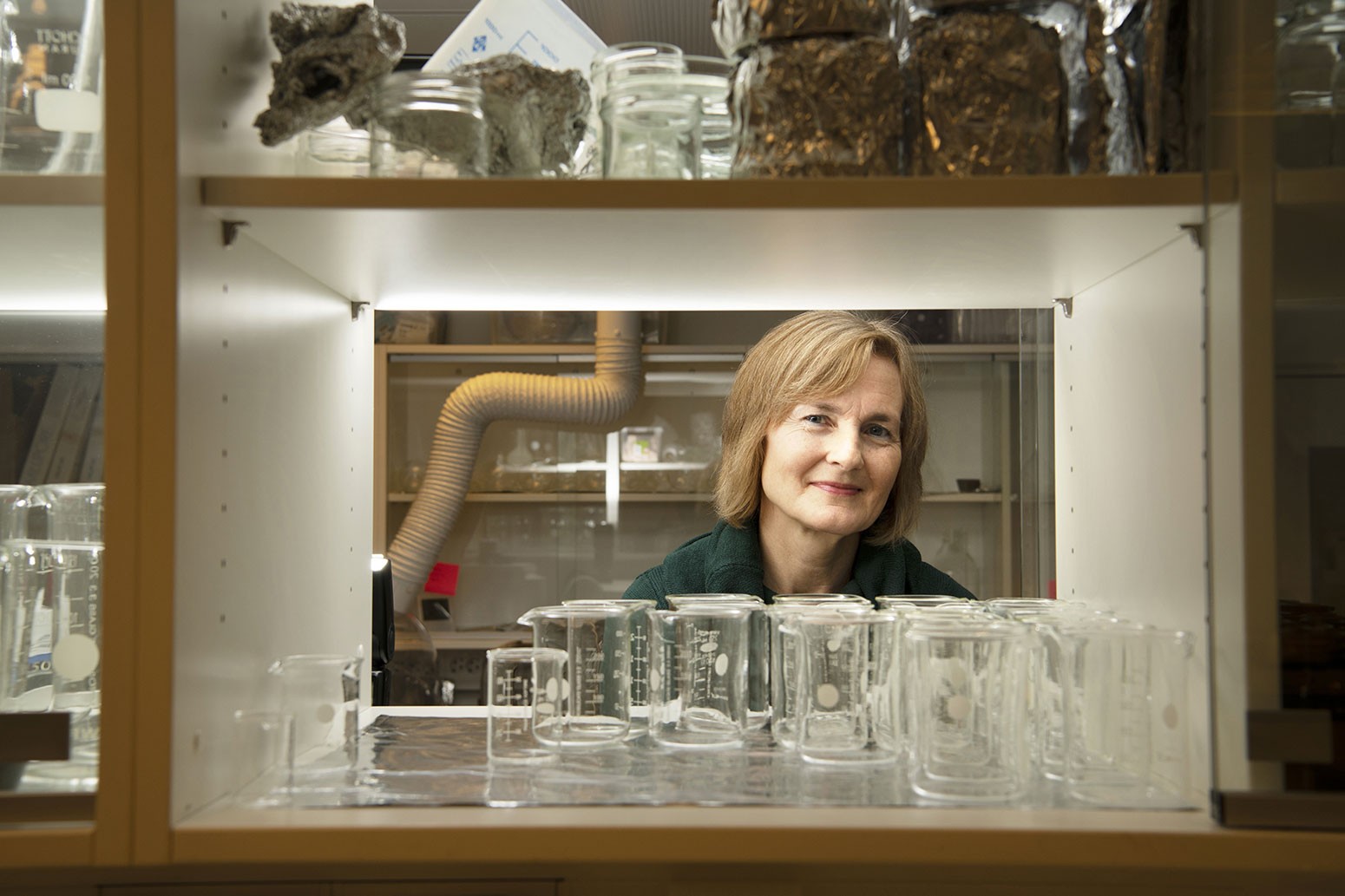 For 25 years, Eldbjørg Sofie Heimstad has been the foremost champion of cooperation at the Fram Centre. And if the occasion demands, she will go to great lengths for her team.

By: Christine Kristoffersen Hansen (text) and Ingun A. Mæhlum (photo)

“Just let me say one thing before we start.”

Eldbjørg Sofie Heimstad has guided us up the stairs at Fram 2, through empty common rooms and corridors silenced by the coronavirus – and into her office at the end of the corridor.

Her books are neatly placed on the shelves and the few papers on her writing desk have been sorted into tidy piles. The small meeting table is decorated with fresh flowers and a bowl of sweets, but Eldbjørg herself doesn’t even have time to sit down before getting right to the point:

“So, I really can’t understand why I of all people am being interviewed. The Centre has so many talented leaders and researchers, but obviously someone has decided that I’m the one to be picked out here.”

Eldbjørg smiles and shakes her head.

“But I usually do as I’m told, so we might as well get on with it.”

Justifying an interview with Eldbjørg is incredibly easy. Ever since she started working for NILU – Norwegian Institute for Air Research in 1996, she has been a highly valued employee and has been involved in countless projects and programmes.

Initially as a researcher, then as a senior researcher – and in 2010, around the same time that the Polar Environment Centre changed its name to the Fram Centre, Eldbjørg was appointed Research Director at NILU. One of her most important tasks in this respect is to lead “Pollutants – Effects on Ecosystems and Health”, a Fram Centre flagship that in recent years has acquired and disseminated unique knowledge about the state of Arctic ecosystems.

In 2019, Eldbjørg took over as head of the Research Leader’s Group, the Fram Centre’s top research management body – and last summer she was also elected as the group’s representative on the Centre’s newly established steering committee.

“It’s basically a paradox that I’ve ended up in so many leadership positions. Those roles often require me to be both seen and heard, but I really prefer to work behind the scenes. At the same time, I think it’s really important that our highly skilled scientists have the time and opportunity to flourish. I can contribute by shouldering leadership responsibility and coordinating collaboration at the Fram Centre,” says Eldbjørg. “In fact, I consider it an honour to be able to work on behalf of the community here.”

Eldbjørg was born exactly 60 years ago in Mosjøen. She was an afterthought in a family that, in addition to herself, consisted of her mother Sofie, her father Erling, her big sister Oddbjørg and her big brother Torbjørn. During her childhood Eldbjørg’s family also lived in Korgen, Hattfjelldal, Mo i Rana, Skjomen, and finally Leknes.

“Dad worked at NVE (the Norwegian Water Resources and Energy Directorate), and his job meant that our family was constantly on the move. When I was a little girl, it didn’t bother me much, but when I had to move to Leknes at the age of 14, it wasn’t quite so easy. Many of the older teenagers there used to joyride in the centre of town, squealing their brakes and hanging out in groups outside the local petrol station. I thought they were really silly and told my parents in no uncertain terms that I wanted to go and live with my sister in Trondheim.”

Oddbjørg is 11 years older than Eldbjørg, and the sisters have always been close. So when summer arrived, Eldbjørg moved to the capital of the country of Trøndelag. Her plan was to attend the last two years of secondary school there, followed by sixth form college. But it didn’t work out that way.

“Although I was very fond of my sister’s children, I worried that they might mean too much noise and hassle, so when my parents came down on holiday a few weeks later I returned home with them.”

Early interest in the natural sciences

Her brother Torbjørn was 15 years older than herself. Eldbjørg describes him as “a different sort of brother”. It was not until he reached adulthood that he was diagnosed with Williams syndrome – a condition characterised by an elfin appearance and mild intellectual impairment, accompanied by various medical problems.
“We were extremely upset when he died after a heart operation in 1994, just before his 48th birthday.” Eldbjørg continues, “Torbjørn’s cheerful disposition gave us something very special. He was passionate about port authorities, hurricanes, and Dracula, but growing up in the Fifties probably wasn’t easy for him. His school and his teachers were undoubtedly far less inclusive than they would have been today.”

If Eldbjørg had not returned to Lofoten from Trondheim with her parents as a teenager, she might not have ended up studying chemistry. Her interest in the natural sciences was awakened by a very dedicated teacher at her secondary school in Leknes.

“His name was Svenn Erik Odden. In retrospect, he was probably crucial for my path forward.”

Turned down an enviable offer

After finishing her twelfth year of schooling, Eldbjørg received a letter: she had been accepted to study chemistry at the Norwegian Institute of Technology (NTH) in Trondheim. There was great excitement in the family, and her father Erling was particularly pleased.

“My father had always dreamed of studying engineering at a more advanced level, since he only had one year of engineering study in Oslo in the Fifties. So when I decided to turn down the place I’d been offered at the Institute of Technology, my father was probably quite upset,” says Eldbjørg. She explains that she and her boyfriend Nils made a joint decision to choose the newly established University of Tromsø.

After studying mathematics, chemistry, and geography, Eldbjørg embarked on a doctorate in physical chemistry. Shortly after holding her public defence, she received a phone call from the Research Director of NILU. They had a vacancy, and he hoped that Eldbjørg would apply.

“I had intended to take a postdoctoral position, but when this opportunity arose, I decided to seize it. It actually hadn’t occurred to me that NILU might be an alternative. I hadn’t published anything about the climate or the environment, and I had a more theoretical education than most of the others here. But the fact that I view things from a different perspective means that I’ve always found it exciting to be involved in stitching together collaboration at the centre. It’s great fun encouraging chemists, biologists, ecologists, mathematicians and statisticians to work together on big projects.”

Her boyfriend, Nils, mentioned above, eventually became her husband. And the father of the couple’s two adult sons, Torje and Erling. Nils is now employed as Professor of Molecular Biosystems and Bioinformatics at UiT The Arctic University of Norway.

Despite their demanding jobs, they are both good at enjoying their leisure time. The couple have a holiday cottage on the island of Ringvassøya, and recently bought an old house in Bergsdalen in Lofoten, which came with a dilapidated cowshed and a Grade II listed forge that guarantees them many hours of renovation work.

“I have always loved being active and being out in the countryside. I avoid the most precipitous peaks, but otherwise I thrive pretty much everywhere outdoors. It’s important both for my health and for my state of mind. The body and soul are inextricably linked.”

All through late summer and autumn, Eldbjørg and Nils gather mushrooms and berries, and at their home in Tomasjord they have two freezers stuffed full of forest delicacies.

“Sometimes my husband and I say we’ve picked enough, but foraging is almost instinctive for us. I’ve done it since I was a little girl and went berry-picking with my parents. We have a neighbour who often says that we won’t give up until we’ve vacuumed the whole forest, and he might be right about that,” laughs Eldbjørg.

“But to be honest, I’m actually rather tired of eating chanterelles, so now I’m handing them out to friends and colleagues.”

Organised sporting activities have also been close to Eldbjørg’s heart. In her youth, she was a line player on the Leknes and Tromsø handball teams.

“Technically we weren’t all that brilliant, but we made up for it with sheer strength,” she says, adding that she was also briefly a member of the team at her workplace.

“There used to be a men’s team here at the Centre, about 20 years ago now, and a few of us ladies were eventually allowed to play. We didn’t do much training, and we were more or less thrown straight into the fray. A lot of the guys we played against weren’t little pip-squeaks like me, and even though I hadn’t been anywhere near a handball team for years, I guess my brain was convinced that I was still great at tackling.

So when a guy nearly two metres tall came towards me when I was on defence, I went straight in for a tackle. Somehow, suddenly, my hands were locked round his neck,” says Eldbjørg. “And I was left hanging there!”

The referee showed a red card and Eldbjørg had to leave the court.

“I’m not usually afraid of making a fool of myself, but I was so embarrassed about that particular episode that I actually decided to leave the team.”

Today, Eldbjørg’s most important mission is to look after the planet. And doing her best to ensure that the chemical industry doesn’t get too far ahead of the research.

“Here at the Centre, we scrutinise what we find in the environment in the north. Since new substances are constantly being developed – which tend to have slightly different properties than the ones we already know – we are always slightly behind the industry. It worries me that society hasn’t been able to demand that the industry focus on sustainability. I suspect the authorities would have to offer incentives that would make it profitable for the industry to use greener production methods. Whether that incentive would be money or something else, I don’t know. I’m not saying we should return to the Stone Age, to a world without any synthetic chemicals. But it’s important that we make use of the knowledge we have accumulated over so many decades. We know we should have turned around a long time ago. Now I’m hoping that the world will come to its senses,” says Eldbjørg.

Anyone who knows her wouldn’t be surprised to hear what she thinks is needed if we are to succeed: