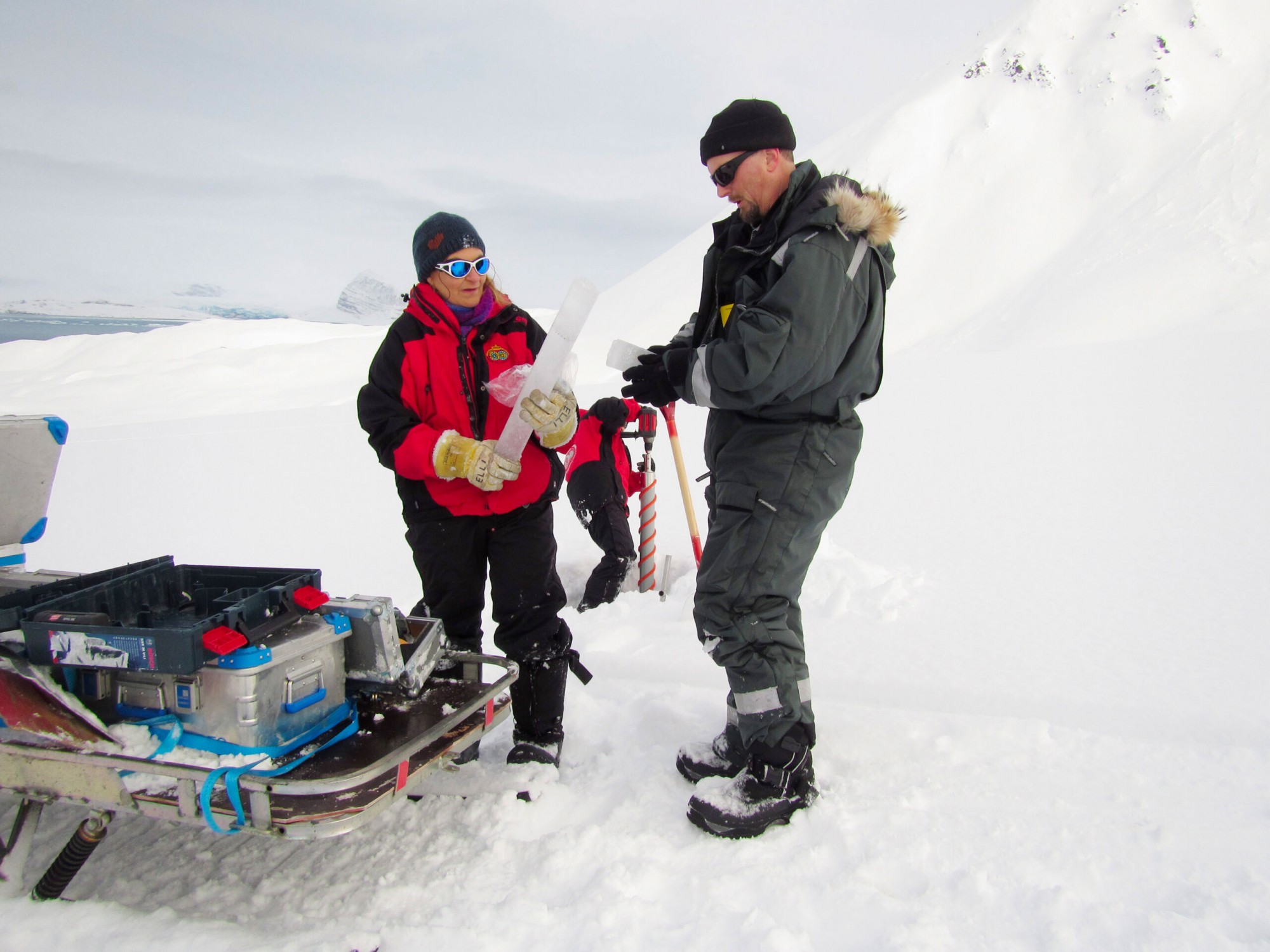 Birds of a feather flock together

It’s never good to talk about someone behind their back, but it can be especially perilous where researchers in Tromsø are concerned. There’s a substantial risk that the person you’re gossiping about is the significant other of one of your listeners.

Many of Tromsø’s research scientists are couples. Across nationalities, institutions, and disciplines, they find each other.

“I can think of six of my fellow employees whose partners are also scientists,” says Maria Fossheim, research director at the Institute of Marine Research.

“There’s a lot of that here!” agrees Cathrine Henaug, Fossheim’s counterpart at NINA, the Norwegian Institute for Nature Research. “Many of ‘my’ researchers are partnered or married with other scientists.”

One reason why Tromsø has succeeded as a research hub is that the town has jobs for scientists who like scientists even when they are not working as scientists. Jack Kohler and Elisabeth Isaksson are typical examples.

The year was 1986 and American Jack Kohler was conducting glaciological fieldwork at Tarfala Research Station in the foothills of mighty Kebnekaise mountain near Kiruna in northern Sweden.

Swedish Elisabeth Isaksson, a student at the University of Stockholm, was working as a field assistant on the glacier where Jack was investigating the effects of melting. But the glacier wasn’t only the thing that melted that summer: two hearts did as well.

When autumn arrived and everyday life returned, they went their separate ways. Jack returned to the United States to continue his doctoral work, and Elisabeth went back to her studies in Stockholm. But they kept in touch as they moved from continent to continent, sometimes spending hours in cars or planes to be together, and the two young glaciologists eventually married in 1990. Still, a hectic life of study and work often kept the couple apart until 1998.

By then, the couple were both employed as glaciologists at the Norwegian Polar Institute. When the Institute relocated from Oslo to Tromsø in 1998, Elisabeth and Jack and their two children also moved north.

“I wanted to head north, because Tromsø isn’t all that far from my hometown of Kiruna, where I have family,” says Elisabeth Isaksson.

They settled down in a house in Tromsø not far from the Polar Environment Centre, which later became the Fram Centre. Close to kindergarten, close to school and only a short distance from work.

Shared values on equality and career

Glaciers tend to lie in polar regions and Elisabeth has done a lot of fieldwork in Antarctica. But since the children arrived, Elisabeth and Jack have mainly focused on investigating the “nearby” glaciers of Svalbard.

“That was a deliberate choice on our part. The kids and family have been a priority, though our jobs are also important,” says Elisabeth.

Both feel they have managed to combine their professional careers with family life. Sharing the responsibility of raising their children meant that one of them could work while the other one was in charge at home. Taking turns at these roles allowed both of them to further their careers and immerse themselves in their research discipline.

Jarle Aarbakke, the former rector of UiT The Arctic University of Norway, is well aware of this phenomenon. “Since 2001, Tromsø has emerged internationally as an attractive place for talented pairs of researchers, because it’s possible to combine children and family life with an ambitious research career. Parental leave and day care give us a competitive advantage,” says Aarbakke.

Since 2001, Tromsø has emerged internationally as an attractive place for talented pairs of researchers, because it’s possible to combine children and family life with an ambitious research career. Parental leave and daycare give us a competitive advantage.”

If you look around in Tromsø today, you might not realise that it is a young research city. Granted, Tromsø Museum was established way back in 1872, and Tromsø Geophysical Observatory was founded in 1928. But it wasn’t until 1968, when Parliament decided to establish a university in Tromsø, that things really started to happen.

The ensuing two decades’ rapid academic expansion in the North gave a foundation and legitimacy for moving the Norwegian Polar Institute from Oslo to Tromsø.

The relocation had a ripple effect in Tromsø, increasing both research activities and the number of research institutes. In the 1990s, the employees at NINA and Akvaplan-niva could be counted in single digits. At present, NINA has over 30 employees in Tromsø, while Akvaplan-niva has grown to over 130.

The trend has continued: the number of employees at the Tromsø branch of the Institute of Marine Research has grown from 30 to over 80 in the last ten years.

Holding on to key people

Tromsø may have attracted research, but Rector Aarbakke noticed that there was a catch: attracting researchers. Finding work for the better half of a scientist one hopes to recruit can be crucial.

“As rector, I had to tackle a few situations where we could have lost key people because their partner was unable to find satisfactory employment in Tromsø,” he confesses. “Clearly this is a rather sensitive issue, but I’m very happy with what we managed to achieve.”

Still, Tromsø can’t afford to rest on its laurels. Offering attractive employment opportunities to both halves of a research couple serves to increase Tromsø’s expertise as well as its population – and this is how Jarle Aarbakke wants it to continue. After many years as rector of UiT, he moved into politics and for a time he was mayor of Tromsø.

“In terms of being attractive to research couples, Tromsø still lags far behind its big brothers Oslo, Bergen and Trondheim. Working to strengthen our competitiveness is an important task. Tromsø municipality must work actively along with the Chamber of Commerce and other relevant actors,” concludes Jarle Aarbakke.