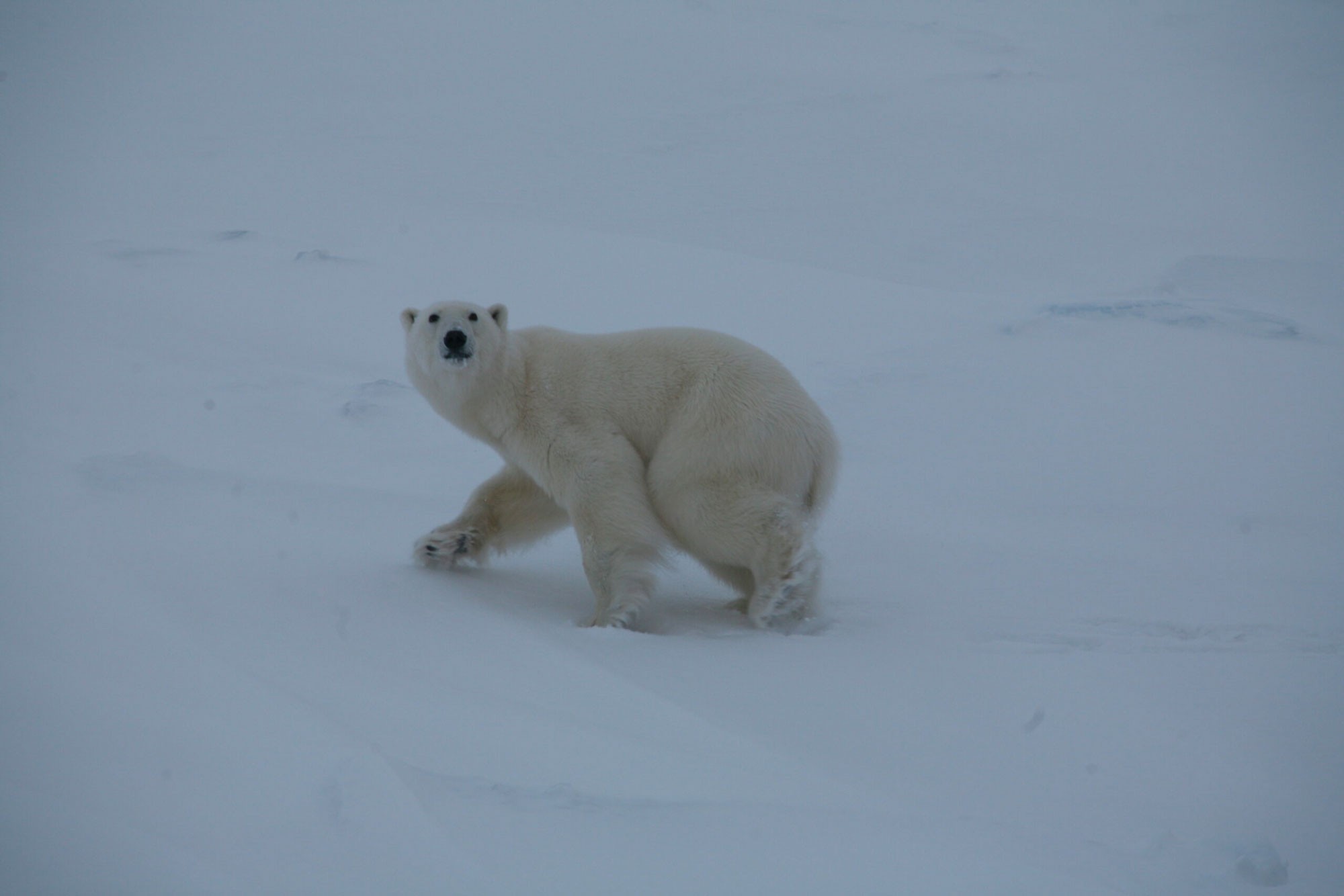 A polar bear in the wild is a delight to behold. A polar bear gnawing on the seat of a snowmobile, or demolishing costly equipment, or breaking into a cabin is more nuisance than delight. Norway’s policies in Svalbard aim to minimise the risk of undesirable encounters between humans and polar bears.

Polar bears are inquisitive and not easily startled, but often react to sudden loud noises. This young bear seemed to lose interest after a field team let off a bear banger above his head. Photo: Magnus Andersen / Norwegian Polar Institute

Seeing polar bears in their natural element is a wonderful experience, but encounters between humans and polar bears pose risks to both parties.

Norway’s management of polar bears is based on strict regulations designed to minimise the number of confrontations that result in fatalities. In addition, most polar bear habitat in Svalbard is protected.

Travellers in polar bear territory must be well prepared and make judicious choices to avoid confrontations. This will help ensure safe but priceless experiences for outdoor enthusiasts, and safe working conditions for those whose professions require outdoor work in Svalbard.

The polar bear has a special status for many humans. The white bear can be a mythical or religious symbol, and is undoubtedly the prime tourist attraction in the Arctic.

Countless visitors come to Arctic regions specifically in the hope of seeing polar bears. Avid amateur photographers dedicate time and resources to taking the perfect shot, and professional film companies compete to capture the most spectacular scenes for their productions.

Through research and monitoring of the polar bear population in Svalbard and the Barents Sea, the Norwegian Polar Institute has created a good knowledge base to advise on how humans can coexist with polar bears. Research on polar bear demography and behaviour can help explain recent trends in bear–human confrontations in Svalbard, as well as predicting future changes.

Over the decades when the Norwegian Polar Institute has studied polar bears in Svalbard, our knowledge about polar bear migrations and how they use space has increased considerably. We now know that some polar bears stay within a limited area throughout the year, while others use the entire Barents Sea and often migrate far north into the Arctic Ocean. Despite these behavioural differences – with some polar bears spending most of their time on or near land while others are out on the drift ice almost year-round – individual bears often return to the same areas at the same time each year.

It is most likely that the “local” type of polar bear has always existed in Svalbard, but that their numbers dwindled after more than a century of hunting. Most of the polar bears that roamed the archipelago in the 1970s came in off the drift ice. These were predominantly “migratory” or “pelagic” bears that came to the islands to make their maternity den or to take advantage of the abundance of prey on the fast ice of the fjords during the spring, but then returned to the drift ice again.

Many years after polar bears became a protected species, some individuals began to establish themselves in Svalbard’s fjord systems on a more permanent basis, and this is what we observe today in places such as Isfjorden, Van Mijenfjorden and Van Keulenfjorden on the west coast of Spitsbergen.

Stationary polar bears have a small radius of action and stay on land for several months during the ice-free period of the year. Adult females make their dens in these areas and then raise their cubs on the fast ice during the spring. Studies of family relationships and migratory patterns show that cubs tend to choose the same strategy as their mother. Over time, clans of polar bears develop that show preference for a limited area. Such place fidelity creates a breeding ground for conflicts with the people who also live in the area. We have observed that young polar bears who have recently left their mother are considerably more likely to become involved in situations that endanger both humans and themselves, compared to older, more experienced bears.

Bears can be a nuisance

Over the years, the number of people who are out and about in Svalbard has increased. Long-time residents, tourists, and people visiting the archipelago temporarily in a working capacity all spend time outdoors. Many cabins, small research bases and other installations have been built in the terrain. Despite this considerable increase in the potential for conflicts between polar bears and humans, there has been no corresponding increase in the number of polar bears shot in self-defence. Improved information for people visiting the wilds of Svalbard has certainly had a positive effect.

Although critical conflicts in which lives are at stake are largely being circumvented, other types of conflicts are on the rise. Polar bears have been breaking into and ransacking cabins in Svalbard for many years. However, it appears that this problem is growing as more and more polar bears are becoming established in populated areas.

Polar bears are curious by nature, a trait that is probably an adaptation to life in an exceedingly barren and inhospitable environment where meals are few and far between and all potential food sources need to be checked out. Curiosity might explain the bears’ strong urge to dismantle whatever humans have placed in the terrain. It is quite common that installations such as antennae are destroyed by polar bears. This is a type of conflict we need to focus on, and our goal must be to develop technical solutions that are polar bear-proof.

Humans must try to avoid critical encounters with polar bears, and act sensibly  if bears are discovered nearby. If you follow some simple advice, you can significantly reduce the likelihood of injury and death, and travel more safely through polar bear habitats.

When travelling in Svalbard, you must be vigilant and keep an eye on your surroundings. You may encounter polar bears anywhere in Svalbard: along the beaches, in the valleys, up on the glaciers. In winter, the sea ice is a favourite place for polar bears, especially areas of fast ice where ringed seals tend to gather.

Out in the wilds of Svalbard, you must not put lives in danger – not your own, not another person’s, and not the polar bears’. That said, you must still be prepared for any critical situations that may arise. An appropriate weapon is necessary if you venture outside the settlements. It is crucial that you know how to handle the weapon safely, both when it isn’t in use and when you have to hit a target in a stressful situation.

You should also be equipped with a flare gun or a flare pen launcher that fires bear bangers to scare away curious polar bears. It is important to frighten off an approaching polar bear as soon as you discover it. If the bear has time to “make itself at home” around the campsite or cabin, it often becomes significantly harder to scare away.

Several serious incidents involving polar bears in Svalbard have occurred in connection with camping in the terrain. Choosing a good campsite and securing it against intrusion are the most important things you can do to prevent dangerous encounters.

Several laws and regulations applicable to Svalbard pertain to how people must conduct themselves in relation to polar bears.

The Svalbard Environmental Protection Act – regulations concerning tourism and other travel outside the settlements, hunting and trapping – was created to protect Svalbard’s environment, including polar bears and their habitat.

Throughout Svalbard, it is prohibited to entice, pursue, or otherwise seek out polar bears, to disturb them, and to expose them or people to danger.

Even when we do our best to avoid confrontation, polar bears will continue to do what is completely natural to them. Sometimes they will approach us in the settlements or in the wild. After all, polar bears are extraordinarily inquisitive predators. So how can we best protect polar bears through our own behaviour? More knowledge, combined with a willingness to change the way we interact with these iconic predators, will make us even better prepared for future encounters with polar bears.