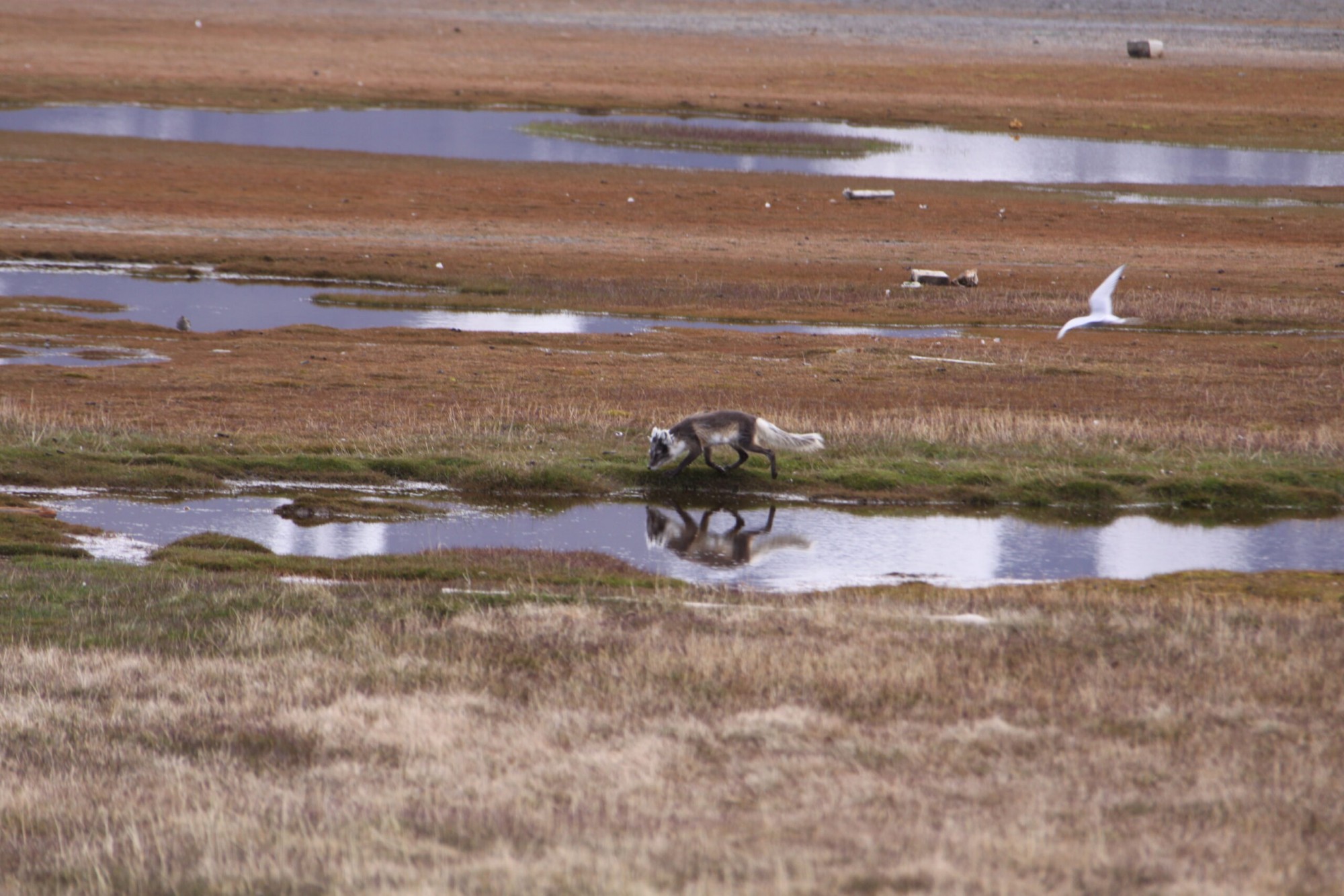 What does the arctic fox eat?

In 2018 an arctic fox captured in a trap had a fishing net around its neck. In 2019 a picture was taken of arctic fox scat with a lot of brightly coloured pieces of plastic in it. These events persuaded us to investigate if ingestion of human litter is a problem for the arctic fox population.

Human litter is ubiquitous. In Svalbard it is on the beaches, in towns, in snow and basically everywhere. The litter found in Svalbard has both local and remote origins; it comes from households, fisheries, and other marine activities.

Sometimes the litter and its origin can be identified, but usually this is not possible. However, the major contributor to the beached litter in Svalbard has been identified as fisheries.

The arctic fox (Vulpes lagopus) is a small terrestrial mammal that is an apex predator and scavenger living in many ecosystem settings from coast to inland and in mountain habitats. The arctic fox population in Svalbard feeds extensively on resources from the marine food web in addition to terrestrial resources, due to lack of small rodents in most of Svalbard.

In the winter months, arctic foxes rely on carcasses of Svalbard reindeer (Rangifer tarandus platyrhynchus) and seals (Phocidae spp.), cached food, and scavenging of any edible items. Because food is in short supply in winter, arctic foxes will investigate any object for potential edibility, and are therefore prone to chew on and ingest human litter and plastic items.

Arctic foxes in Svalbard are hunted for their fur, using baited traps. The annual fox hunt, which runs from 1 November to 15 March, is regulated by the Governor of Svalbard. The catch is delivered to the Norwegian Polar Institute, which organises the skinning and dissection of all the trapped foxes. The skins belong to the trappers, but the carcasses are further dissected and studied by the Institute as part of their monitoring and research efforts.

We used stomachs and intestines from 20 arctic foxes trapped from January to March 2018 to investigate the frequency of ingestion of human litter and plastic in winter, when scavenging is at its peak for arctic foxes. We adapted a version of the sampling protocol from the Oslo-Paris Convention (OSPAR) used for monitoring plastic ingestion by the northern fulmar (Fulmarus glacialis), since there are no standardised methods for terrestrial mammals.

Two out of 20 foxes had eaten human litter within the last 24 hours before they were killed. For arctic foxes, it takes 8-20 hours from when an item is eaten until it is eliminated. One had eaten a medium-thick cotton rope and the other had eaten a cream carton manufactured in Belarus.

About 40 years ago, the last diet study of arctic foxes in Svalbard was done by Pål Prestrud. He examined 851 arctic foxes caught during the winters 1977-1989. Twenty-five of these had ingested human litter such as plastic and paper bags.

So, what about the arctic fox that gave us the colourful scat? Close examination of the picture reveals that the fox had eaten reindeer hair, most likely from a carcass. The orange fragments seem to be from a broken net float.

This would imply that the fox has been searching for food on beaches and found something that was so interesting it could not be left alone – orange and blue objects that perhaps smelled of food, or for some other reason had to be chewed on and investigated as possible food sources.

The availability of food for arctic foxes is highly seasonal. They have plenty of food in summertime due to the presence of breeding migratory birds.

In wintertime their food availability is low and the foxes rely on scavenging, cached food items, and opportunistic feeding on any edible items.

All around Svalbard there are and have been several initiatives for cleaning beaches and reducing human litter. Nonetheless, entanglement in plastic still occurs and often has a deadly outcome for the individuals involved – be they foxes or other wildlife. Ingestion of litter is not good for the animals either.

The Governor of Svalbard, the tourist industry, local businesses, volunteers, tourists, and others are involved in these clean-up initiatives. They are reducing human litter to some extent, but is it enough?

Have two colour morphs: white and blue, in Svalbard 84-97% are the white morph

Size of population in Svalbard: No population estimate exists for the entire Svalbard archipelago. Estimates for the monitoring areas are 1-2 foxes per 10 km2.