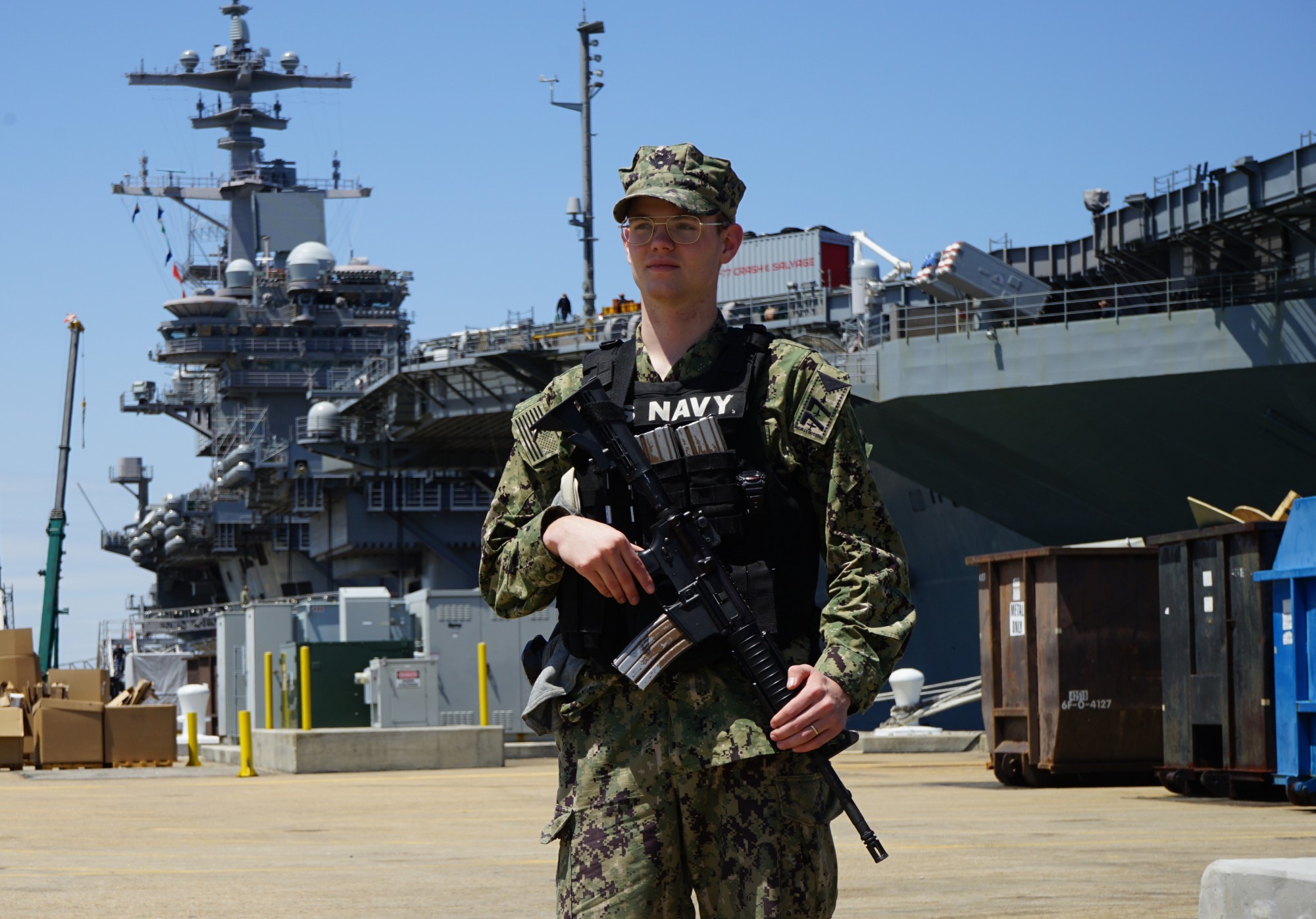 NORFOLK, VIRGINIA: The soldier stands guard in front of the «USS George H. W. Bush» - an aircraft carrier optimized for North Atlantic and Arctic missions. Considered one of the most powerful ships in the world, the carrier will help bolster NATO's northern flank and secure lines of communications.
Read in Russian | Читать по-русски

The welcome message from Joint Force Command Norfolk is clear: Sweden and Finland will make the alliance stronger. Being rapidly pushed into NATO by Russia’s military gangsterism, the two Nordic countries are now formalizing membership applications that were not even on the agenda a few months back.

“By joining NATO, Finland will strengthen its own security and that of all of Europe. We are making this historic decision for future generations,” Foreign Minister Pekka Haavisto said as his country announced its desire to join the military alliance.

Sweden is expected to follow later this week as public support for membership has grown quickly, prompted by Russia’s war on Ukraine.

From his desk at Norfolk, Deputy Commander Rear Admiral Tim Henry keeps close eyes on the changing security landscape across the Atlantic. “I have operated with Sweden and Finland for many years and it is always a delight to work with them, with their armed forces,” Adm. Henry said. “Both countries are long-standing partners with the alliance.”

Established in 2018 in response to the rising Russian threat, the operational command center is NATO’s newest. A slogan in the entrance hall tells its focus: “From Florida to Finnmark - From Seabed to Space - Ready to Fight.”

Further strengthening of military ties across the North Atlantic came the same year as the U.S. Navy 2nd Fleet was reestablished and colocated with Joint Force Command Norfolk. Home to 75 warships, including six aircraft carriers and several nuclear-powered fast-attack submarines, Naval Station Norfolk is the world’s largest navy base. It provides ships not only to the 2nd Fleet in charge of the US East Coast and the North Atlantic but as well to the other six numbered fleets, depending on needs.

A voyage to the waters of northern Europe is high up on the priority list as the «USS George H. W. Bush» now is in the final stages of tests before heading out to sea in August this year. Being the newest of the Nimitz class, the 333-meters long nuclear-powered supercarrier has just undergone a three-year docking and overhaul.

“I hope the ship will make it up to Norway for a port visit,” said Capt. Robert Aguilar to the Barents Observer. Aguilar, though, will disembark before the next mission as Capt. Dave Pollard takes command to sail the «USS George H. W. Bush» across the Atlantic.

An aircraft carrier never sails lonely. It operates with other warships, usually at least one cruiser, a few destroyers or frigates and on occasion submarines. The formation of navy ships could include other NATO member states’ ships, like this winter when the Norwegian frigate «KNM Fridtjof Nansen» was part of the «USS Harry S Truman» strike group sailing the eastern Mediterranean Sea, a mission that lasted a few months longer than planned due to Russia’s war on Ukraine and the tense situation in the Black Sea region.

In Arctic waters, the Russian navy operates some of its most modern warships armed with new weapon systems.

“I don’t focus on vulnerability, but our strength”

“I don’t focus on vulnerability, but our strength,” said Capt. Robert Aguilar when asked about the threat posed by Russia’s new hypersonic Tsirkon missile that now is being deployed on Northern Fleet frigates and submarines. He noted that it still remains to see how the missile work. The US Navy is now looking to figure out which capabilities it currently has in defense against the Tsirkon missile. But as Aguilar said: “They have to find me to shoot me. So just because they have a fast missile doesn’t mean they can target me.”

“My defense is to not be where they suspect me to be, and to be hard to target.”

Political Advisor with JFC Norfolk, Snorri Matthiasson, said NATO’s renewed awareness of the maritime situation in the Nordic region is closely linked with “the rise and resurgence of the Russian Northern Fleet and their capabilities in the undersea domain.” He noted that lines of communication to protect across the Atlantic are not solely linked to traditional threats posed by submarines sinking surface ships, but also to modern data transfers.

“Most of what crosses the Atlantic today does so in bits, “ones-and-zeros” in cables underneath the oceans.”

“That is the modern economy we are protecting,” Matthiasson said.

The Barents Observer has previously reported about Russia’s Main Directorate for Deep-Sea Research, nicknamed GUGI, which from the Kola Peninsula and the White Sea operates a fleet of special-purpose submarines and surface oceanographic vessels that in the course of the last few years dramatically have stepped up activities around undersea data cables in the North Atlantic.

Damage to the system of fiber-optic cables between the United States and Europe could harm the western world’s economy much worse than any fast-flying cruise missile.

“They are hundreds of billions of trade and stock markets around the world,” said Rear Admiral Tim Henry.

Do you have the means to protect those cables from GUGI?

“Do I have the means to protect them? Of course, we have the means. The answer is yes. As a military person, yes. Making it impossible for anyone to operate without us knowing it, and understanding what they are doing. We have a good understanding of what is going on in our area of responsibility, yes,” the Deputy Commander at JFC Norfolk said.

Both Finland and Norway have highlighted the danger of Russian hybrid operations, that be jamming of GPS signals, making damage to subsea data cables, or cyber-attacks.

Russia has denied any such operations, saying accusations are caused anti-Russian hysteria.

Moscow is now warning Finland and Sweden against joining NATO. Kremlin spokesperson Dmitry Peskov said the alliance “remains a tool geared towards confrontation.” He added that “further expansions [of NATO] will not bring additional security to the European continent.”

Julie Wilhelmsen, a Senior Fellow with the Norwegian Institute of International Affairs, said that while President Putin for years has warned about NATO coming closer to Russia’s borders, he himself is the one that now is pushing Finland and Sweden into NATO, as well as other countries away from cooperation with Moscow.

“It is a paradox. Efforts to punish neighboring countries into taking part in Russia-led projects, such as the Eurasian Union, have backfired, making participation less likely,” Wilhelmsen said.

The result, she continues, is more militarization in the Nordic region.

“What has been a growing cold war-like tension will now materialize in a more solid militarization on both sides of the ‘new’ east-west divide.”

Norway was one of the NATO members pushing hard for the recreation of an Atlantic command that led to the 2018 Brussels Summit confirming the establishment of Joint Force Command Norfolk.

“Norway has had a focus north at all times,” said Commodore Ståle Pedersen, Chief of Operations at JFC Norfolk.

“NATO is much better coordinated than anytime before. That fits how Norway is thinking,” Pedersen said. “To be capable of defending Norway means we rapidly need help.”

Pedersen and his Danish colleague at Norfolk, Commodore Søren Thinggaard Larsen, are frequently in contact with Joint Headquarters at Reitan, northern Norway, and Joint Arctic Command in Nuuk on Greenland.

“Norway and Denmark have a unique experience in operating under very demanding conditions up north,” said Larsen. They are both happy to see that other NATO members are eager to learn from what the Arctic nations can share about military operations in deep snow and ice-covered waters.

NATO nations on cold climate training have this winter participated in exercises that more or less have overlapped each other inside the Arctic Circle, onshore, and at sea outside northern Norway. This has happened at the same time as NATO for the first time in history has deployed response forces to Eastern Europe following Russia’s war on Ukraine.

Both Norway and Denmark more than welcome their Nordic neighbors joining NATO. What happens this spring is a historic redrawing of the security landscape on the Scandinavian Peninsula.

“The geopolitical changes are immense,” said Per Erik Solli, a senior defense analyst with the Norwegian Institute of International Affairs.

“NATO’s eastern border in the north will change from Norway’s border to Sweden into Finland’s border to Russia. Norway will no longer be “NATO in the North”, but one of three,” Solli said.

While Norway’s border with Russia is 200 kilometers short, Finland’s membership will add 1,340 kilometers of NATO border responsibility. That said, Russia’s important military bases are not along the Karelia border regions to Finland, but up north on the Kola Peninsula where Norway has been a NATO neighbor since 1949.

“We will now get a homogeneous solution in northern Europe with all five Nordic and all three Baltic states in the same alliance enhancing regional deterrence and defense,” Per Erik Solli

Until now NATO has only planned to reinforce Norway in a case of invasion and war, but now the insertion will be into a wider Nordic region.

Solli explains how reinforcements in the future will have more geographical flexibility to assess the threat situation and select a favorable deployment entry area depending on the situation.

“We have already seen a more flexible operational concept from our allies. Forces from the US Marine Corps have lately used equipment pre-stored in a faciliatory near Trondheim to deploy and participate in exercises in Finland, Norway and Sweden. We have also seen several types of forces from the USA and the United Kingdom participating in national exercises in Finland and Sweden,” he notes.

Solli believes the transition period for Sweden and Finland to adapt to the North Atlantic alliance will be easy since the two countries already for decades have participated in training and exercises with Norway and other NATO states.

“There will now be three countries’ military organizations in the High North that can defend the area together initially if we are invaded, and hold the fort so to speak until allied reinforcements arrive,” Solli elaborates.

Meanwhile, at JFC Norfolk in Virginia, the Deputy Commander assures that help will come in case of crisis.

“Every time it really matters it is never a doubt,” Rear Admiral Tim Henry.

“Russia invaded Ukraine. Within hours, not days, not weeks, not months, but within hours, NATO had responded at 30 nations collectively, and politically to military reactions to ensure that the defense to NATO territory was fit for purpose,” Henry said and adds that he still has a good night’s sleep.

“You should go to bed reassured that you have the most successful defensive alliance ever that is day and night thinking, preparing, and knowing how to respond if there is a threat to the alliance,” Henry said to the Barents Observer.