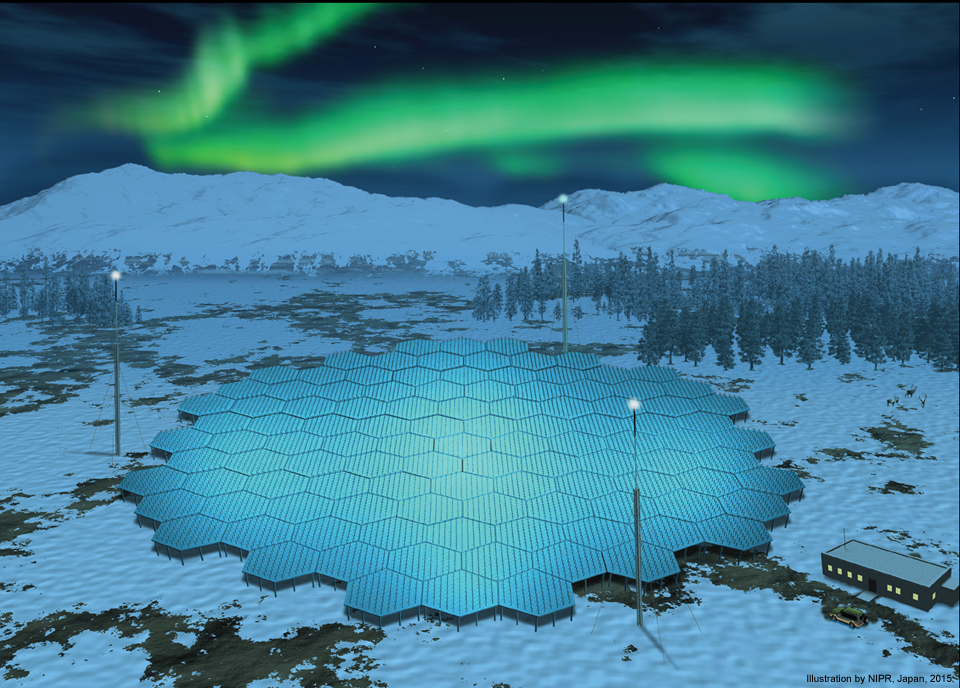 Space radars allow researchers to spot some of the smallest things in existence – electrons – up to a thousand kilometres away! Now an even more advanced radar antenna facility is being constructed, which will offer unprecedented opportunities.

By: Trude Haugseth Moe // UiT The Arctic University of Norway

Yet physicist Juha Vierinen can spot electrons one thousand kilometres away!

That is like catching sight of a few gnats buzzing around in Bodø all the way from Oslo.

Vierinen is involved in development of new high-tech 3D space radars, to obtain the best possible data for research on the northern lights.

Since the 1970s, the physicists at UiT have been among the main driving forces in the EISCAT project, which is a collaboration between many European countries, plus Japan and China. One large EISCAT facility, located in Ramfjord outside Tromsø, uses what is called “scatter” radar technique to study the earth’s upper atmosphere. Over the years, the project has attracted researchers to Tromsø from all over the world.

In 2022/2023, EISCAT will be replaced by a brand new radar facility – EISCAT3D. A total of 10 000 radar antennas will be deployed in Skibotndalen; similar arrays will be constructed at Kaiseniemi near Torneträsk in Sweden and Karesuvanto in Finland. In addition to research, EISCAT3D could also have an operational role in international space weather forecasting.

The new radars will be much more advanced than their predecessors. For example, their focus can be redirected at lightning speed if something interesting happens in space, and they will have much higher resolution and focal length.

The researchers say that using these new radars will be like getting new, much stronger glasses: they will suddenly be able to see things that used to be out of focus.

The “old” system consists of satellite dishes, which take a long time to move. When taking a bearing, they can only measure one direction at a time. The new antennas will send out an entire cluster of rays, simultaneously capturing images covering an enormous segment of sky. Since there will also be EISCAT3D facilities in Finland and Sweden, measurements will be obtained from three different angles, allowing the researchers to see the northern lights in three dimensions. Then they will be able to detect impending phenomena, such as a plasma cloud or another structure, and can focus the radars on it.

“In addition to being able to scan the sky faster, thus getting a much better picture of the part of the atmosphere where the northern lights appear, the radars will allow the researchers to do even more,” says Vierinen.

The amount of space junk has increased significantly over the years. Reliable sources estimate that 7 500 satellites have been placed in Earth’s orbit since 1957, of which around 4 300 are still in space. Only 1 200 of them are still operational. The rest are considered space junk.

About 29 000 pieces of space junk larger than 10 centimetres have been mapped so far. This rubbish poses an increasing risk to space travel.

The new facility will therefore provide many new opportunities.

We now know a lot about how space works. But the researchers still have many unanswered questions.

“We want to improve our ability to predict major solar flares and other solar storms over the longer term. So we need to understand even more about how the storms arise and how they move through space,” says Vierinen.

This is why he believes that basic research – when scientists investigate something without knowing what they might find – is crucial.

“Basic research is important because we don’t really know what is important. If Einstein hadn’t embraced his curiosity and investigated phenomena, he wouldn’t have developed the theory of relativity or quantum mechanics,” Vierinen concludes.