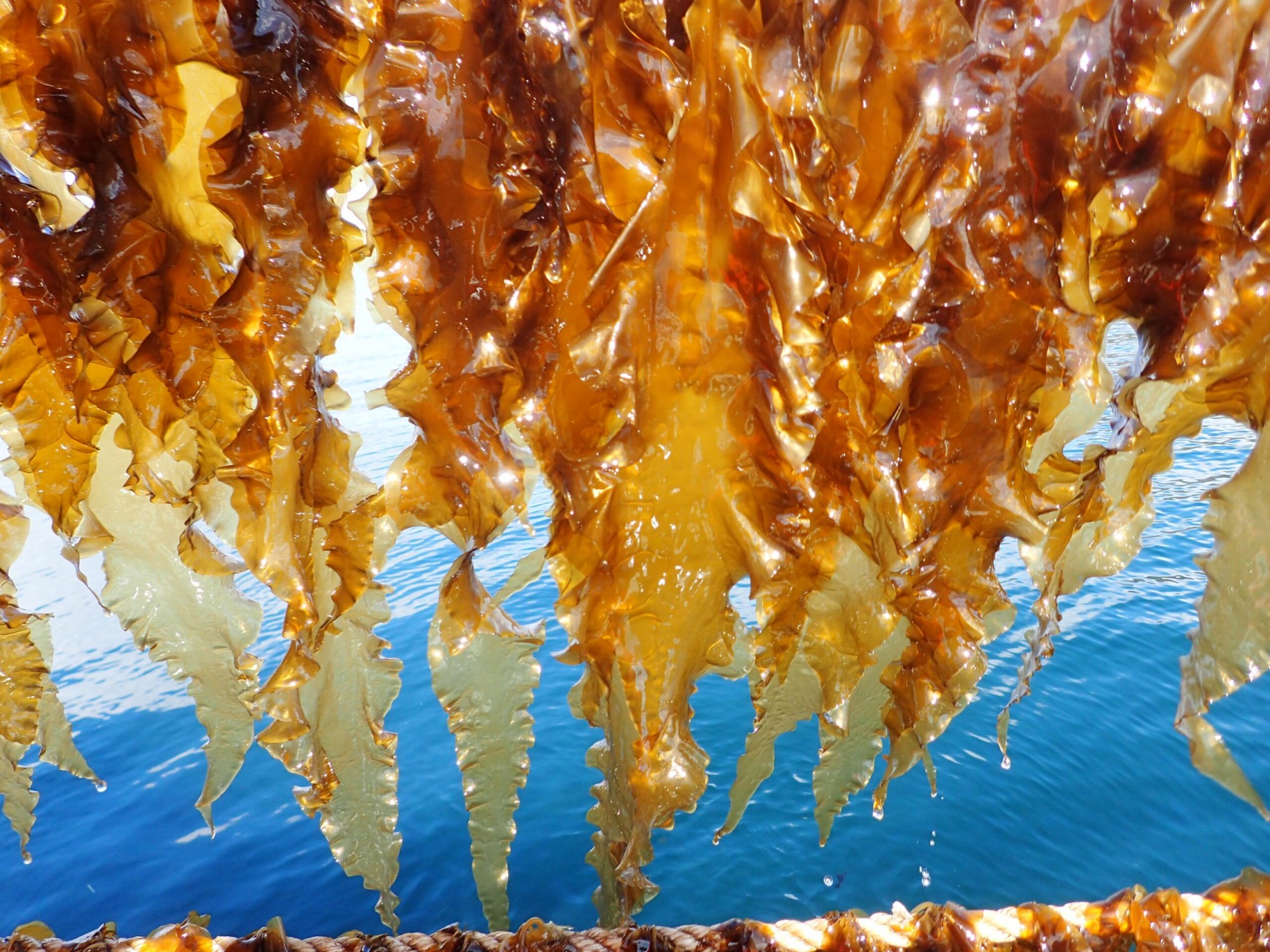 The benefits of subarctic kelp cultivation

I am out walking with my children along a windy, desolate sub-Arctic beach. Seagulls fly high above. We take in the distinct sound and scent of the sea. Suddenly my youngest child hunkers down, then pops up again with a big grin, his mouth full of rockweed. He loves seaweed, and so does his big sister.

I’m a phycologist: I study algae for a living. Perhaps you’re thinking, “Obviously the children of a phycologist love seaweed!” Actually, I’ve never taught my children to eat half-dried, tough, sandy seaweed. But I haven’t ever stopped them from eating it either. Unfortunately, this joy and instinct of consuming seaweed doesn’t come as naturally to me as it does to them.

I continue gazing along the beautiful rocky beach. The ebbing tide is uncovering bands of wonderful rockweed ranging in tones from olive green to yellow and brown. Some consider them stinky and disgusting but they seem infinitely exciting for children. These species are very important for ecosystem functioning, supporting myriad forms of life, and seaweed loves the cold, clean, nutrient-rich Arctic water. My gaze shifts to the dark water and when my eyes adjust, the abrupt end of the field of seaweed appears at the waterfront. Where the rockweed should transition to the larger kelp species, I see a barren seabed dotted with sea urchins (Strongylocentrotus droebachiensis). Sea urchins eat huge amounts of kelp, and urchin populations along the Norwegian coast had a sudden increase in the early 1970s. The reason for this increase is debated, but it is a fact that coastal cod stocks have struggled since the decline in the kelp forest in the north. The provision of nursing ground for coastal fish species is only one of many ecosystem services that disappeared with the seaweed forests’ decline.

There are many possibilities for supporting the transition from the barren Arctic seafloor left behind by the sea urchins back to the highly productive kelp forests. But this is not a story about kelp restoration: this is a story about cultivation of seaweed, and why the sub-Arctic is such a promising site. This may come as a surprise, since kelp farming above the Arctic Circle has been considered unfeasible. Some have argued that the dark winters and the short growing season in this area represents a showstopper for kelp cultivation. Studies within the region, however, have disproved this, demonstrating not only that it is feasible to cultivate kelp this far north, but also that the High North offers certain benefits compared to kelp cultivation at lower latitudes.

What is kelp cultivation?

First, for those of you who don’t know much about kelp cultivation: worldwide it is huge! In 2019 the global production of cultivated aquatic algae was 34.7 billion tonnes. This is 24 times the biomass of salmon production in Norway. The economic value of cultivated seaweed was 15 billion USD. Less than 0.017% of this production takes place in Europe, and even less in Norway. However, there is great potential for increased seaweed production along what is the world’s second longest national coastline.

Biofouling as a bottleneck

One of the bottlenecks for kelp cultivation is that other organisms grow on the kelp, reducing its quality. This process is called biofouling. To avoid this decline in quality, kelp farmers must harvest their crop before the biofouling organisms settle. Early harvesting curtails the kelp grow-out phase in the ocean. Previous studies and observations, south of the Arctic Circle, showed that these biofouling organisms arrive in springtime or early summer, and some experts assumed it would be the same farther north. That would leave only a couple of months of growth from deployment to harvesting. But, as these biofoulers are usually ectothermic (cold-blooded), they arrive later in the colder waters up north, extending the growth season. This fact confers many benefits on sub-Arctic kelp cultivation.

First, Arctic kelp cultivation can take advantage of the long summer days and midnight sun. This means we can produce large amounts of biomass, one basic criterion for successful cultivation. The continuous daylight (or actually the absence of darkness) during the Arctic summer amplifies two of the most important ecosystem services provided by kelp: the incorporation of the greenhouse gas carbon dioxide by photosynthesis, and the production of oxygen as a by-product.

The binding of carbon dioxide also increases seawater pH, thus mitigating both ocean acidification and climate change. As everything is beautifully connected, the colder Arctic waters help extend the time when nutrients are available, and postpone the arrival of biofoulers. Together, these factors provide kelp cultivated in the High North with excellent growing conditions.

Another positive aspect of the extended growing season in the sub-Arctic, is that it allows more time for co-cultivation of species on different trophic levels. In Integrated Multi-Trophic Aquaculture, IMTA, one or several species feed on effluent or waste from other species. In short, one species’ trash is another species’ treasure. In Asia, where both food habits and regulations tend to be more flexible, the advantages of co-cultivation have been recognised for centuries; sometimes as many as ten species are raised at one site. Aquaculture in Asia combines cultivation on land and in the ocean, often with distinct species such as rice, seaweed, pigs, carp, shrimp, and ducks. In Europe, we usually have monocultures with only one species, like salmon in Norway. In monocultures, the feed has to be provided from outside the aquaculture system, and the waste products are left unexploited, with possible negative effects on the environment. There is growing interest in IMTA in Europe, but there are some bumps in the road that need to be smoothed out for this to be developed fully.

Two industries that could benefit from co-cultivation are the salmon and kelp industries. Here, the kelp can utilise the dissolved nutrients from salmon aquaculture, which would reduce the environmental footprint of salmon production. The amount of effluent from salmon farming is affected by seawater temperature: warmer water increases the metabolic rate in fish. One of the benefits of co-cultivation is obviously the existence of the “trash-loving” species when trash provision is at its peak. If the kelp is harvested in springtime, there will be a mismatch between maximum effluent production and maximum effluent uptake. If the kelp instead is harvested in late summer, there will be a better match, and better conversion of “trash” to “treasure”.

Kelp cultivation would be beneficial in areas where natural kelp forests are missing, as kelp forests offer shelter, a nursing ground, a place to live, and food for marine species such as the lumpfish, which eats salmon lice. Kelp cultivation may possibly also speed up the re-growth of kelp forests by providing sporelings to surrounding areas that have been grazed bare by sea urchins.

Many products can be made from seaweed. Some say that everything you can make from oil, you can make from seaweed. One obvious product that demands very little processing and biorefining is food for humans. Again, Asia is a pioneering continent where seaweed is considered perfect food for just abut any occasion, including as a snack. Europe may not be far behind on that road. We have to start by not stopping others who appreciate the flavour of algae. So next time you see your own or someone else’s child chewing on seaweed from the beach, remember not to stop them!

Kelp and the carbon cycle