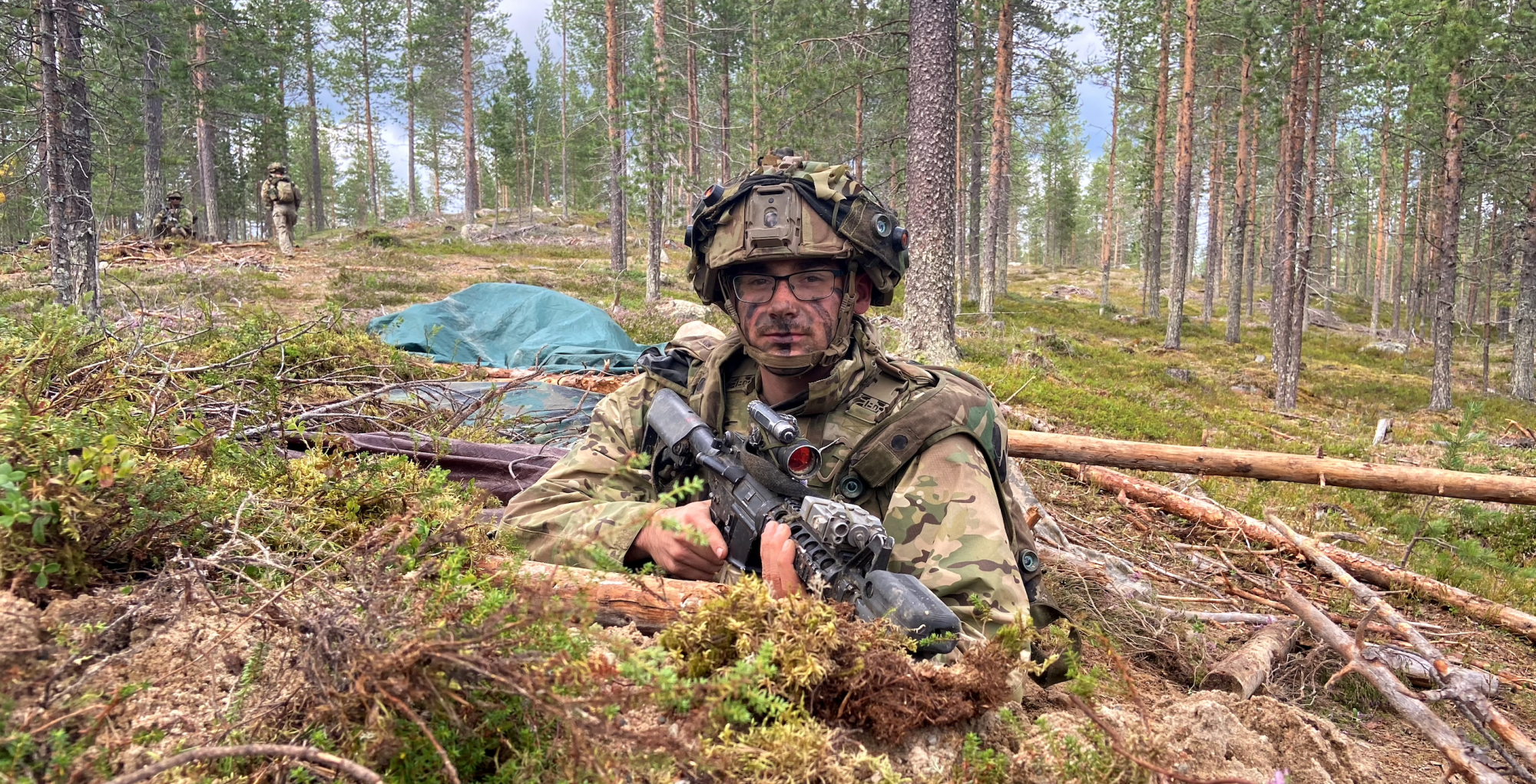 ROVAJÄRVI: Private First Class Aaron Cox with the U.S. Army’s airborne troops is one of about 750 soldiers participating in exercise Ryske in Lapland this week. Military interoperability in extreme Arctic environments is trained to support Finnish security during the joining process to NATO.
Read in Russian | Читать по-русски

Vladimir Putin said he wanted a stop to the expansion of NATO, but with Russia’s invasion of Ukraine, one can now witness a stronger military cohesion between U.S. and European allies. So also in the North where the traditionally non-aligned countries Sweden and Finland are inviting for increased international exercise volume with key partners in the transition period to membership this summer and autumn.

Ryske (Finnish for “crash through”) is the largest army exercise north of the Arctic Circle. It takes place deep in the boreal forest between Sodankylä and Kemijärvi, some 90 km from the Russian border. Alakurtti, home to one of Russia’s two Arctic brigades, is about 145 km east of the training ground where U.S., Finnish and Norwegian troopers now are exercising.

For the Jaeger Brigade, the northernmost army unit of Finland’s defense forces, is joint operations with partner countries nothing new. Last winter, their soldiers participated in the Norwegian-led NATO exercise Cold Response.

“The objective is to enhance U.S. and Finnish land units’ capabilities to operate in Arctic environment,” he added.

Finland’s security cooperation with NATO has been going on for decades already. The Nordic country joined the Partnership for Peace program in 1994, a short three years after the breakup of the Soviet Union. Finland has also participated in NATO-led missions in the Balkans, Afghanistan and Iraq.

On the soft-security side, Helsinki has for the last three decades been a key player in building economical and political bridges with Russia aimed to integrate the eastern neighbor into European collaboration. Arctic Council, Barents cooperation, EU’s Northern Dimension Partnership and the Baltic Council are some examples of multilateral mechanisms it took decades to build, but days to destroy following Russia’s war of aggression against Ukraine.

An opinion survey from April this year shows that 84% of Finns believe Russia poses a military threat, and more than 90% think Russia is an unpredictable and volatile dictatorship.

Finland officially applied to NATO on May 18 and a week later, on May 27, the country’s Defense Minister decided to increase defense cooperation on training and exercises with main partner countries.

That is why military forces from countries like Norway, the United States, the United Kingdom, and Sweden are deployed to war games training in both southern and northern Finland this summer and autumn

We are getting closer to forming one big team, said Jukka Kotilehto, Deputy Commander of the Jaeger Brigade in Sodankylä.

U.S. soldiers assigned to the 2nd Brigade Combat Team and the Airborne Division will stay in Finland for seven weeks. Exercise Ryske provides combat training unlike anything in previous experiences for the Americans. Grassing reindeer in between the minefields, chooper-size mosquitos and 24-hours daylight are all challenges unique to Arctic battlegrounds.

But first and foremost is the goal to develop combined operational combat capabilities across technical, cultural and language barriers.

“Radio communication and language differences have been the most difficult obstacle so far in the combat phase of the exercise,” said Colonel Kotilehto.

Covering 1,100 square kilometers, the Rovajärvi artillery range is the largest in Western Europe. Advancing through the boreal forest, where an ambush could come from anywhere at any time, requires technics and managing skills a military adversary would find deeply troubling.

Half of the American and Norwegian troopers participating in the exercise were deployed to the forest battlefield by helicopters. U.S. Airborne troops have two CH-47 Chinook flying out of Rovaniemi air base, while the Finnish military provides an NH90 for trooper transport.

The 150 Norwegian Army soldiers, some 125 conscripts and 25 officers are all from the Porsanger battalion, part of Finnmark Land Command. The battalion is the northernmost permanent based land forces to defend NATO’s northern flank and has, due to the geographic particularities of tiny Norway, been a lonely power in the vicinity of Russia’s heavily militarized Kola Peninsula.

Maneuvering Troms and Finnmark region along the coastal road (European route E6) between fjords and steep mountains made the Norwegians vulnerable and easy to take out with the use of precision weapons. Russia’s Northern Fleet has over the last few years tested and deployed long-range cruise missiles that with very short warning time can reach targets deep into the Scandinavian Peninsula.

Up north, Kremlin’s military planning aims for anti-access and area denial; on land, at sea, and in the air for areas west of the strategical important ballistic missile submarine bases on the coast of the Barents Sea.

With Finland and Sweden now joining NATO, the Nordic military forces’ access through common territories and combined planning will strengthen the northern flank of the alliance to whole new levels and make potential Russian area denial operations harder to achieve in a conflict senario.

Geographical flexibility to quickly deploy forces at different locations when NATO expands from one to three nations in the north makes reinforcement of northernmost Europe by U.S. military much harder to predict for a potential enemy.

The high-level enhanced international military exercises in Finland this summer are all part of the new security architecture enfolding in the European North.

Company commander, Captain Petter Nybøle Lie, with the Norwegian Porsanger battalion said the cooperation with Finnish soldiers is not a big difference compared with long-established procedures among different NATO forces, including joint training with the U.S. military.

“It goes great,” he said, but notes that there is a mentality difference between the two countries. Finnish soldiers take higher risks.

Risks or methods, though, the Norwegian soldiers are more than happy to share the results of the last few days fighting against the American soldiers deep in the forest battlefields: “We won,” the conscripts smile and take a well-deserved break with a recap.

A few minutes later started a major artillery attack led by the U.S. troopers. Combined with heavy rains with thundershower, the smiles were soon gone and replaced with short commands over the radio as the young soldiers started to regroup in the terrain.

Nearby, the adversary team consisting of Finnish and Americans were placing mines along the road and at a bridge cross a creak. “Ryske” (crash through) is easier said than done.

Click on the gallery below to see more photos from Exercise Ryske 2022.