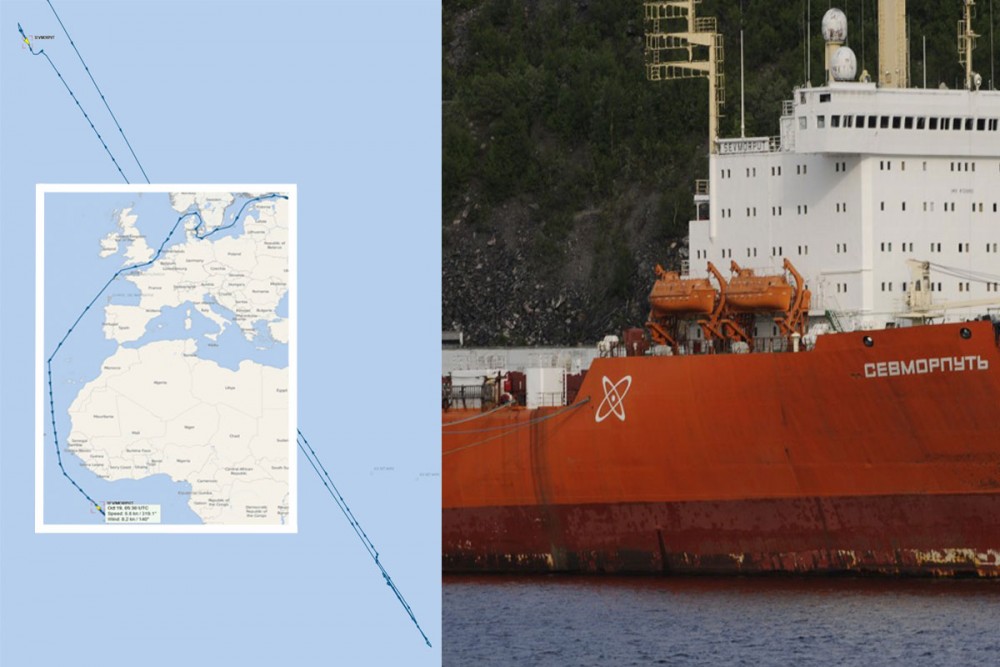 "Sevmorput" was sailing back-and-forth at reduced speed in the South-Atlantic outside the western coast of Africa.

The "Sevmorput" carries modules for the new huge Vostok research station for Antarctica.
Read in Russian | Читать по-русски
By

“Sevmorput” left St. Petersburg on October 5, steaming south at steady 18 knots. Until this weekend. In the Atlantic, about 500 nautical miles west of Africa, the aged nuclear-powered freighter suddenly reduced speed and turned around for a northbound course. All Sunday, the 260 meters long vessel sailed back-and-forth.

Tracks of the voyage can be seen on VesselFinder.com and MarineTraffic.com, based on the automatic identification system (AIS).

Later on Sunday, “Sevmorput” ended the back-and-forth sailing, but instead of setting course towards Antarctica, she kept a northwest route all Sunday night and Monday morning. At a slow-speed of 6 to 7 knots.

Monday by noon (CET), another 180 degrees turn brought “Sevmorput” back on a southbound pattern, but still at a speed of only 6-7 knots. The ship still sail at the speed Tuesday afternoon.

Rosatomflot, the Russian state enterprise operating the fleet of civilian nuclear-powered icebreakers, has not been forthcoming about the mysterious zig-zags routes and reduced speed over the last few days.

Another Murmannsk-based icebreaker, the “Kapitan Dranitsyn” is currently south of “Sevmorput”, also en route to Antarctica with equipment and crew to the Russian research station.

Built for Arctic waters, though, the cooling system for the single-reactor powering the vessel shouldn’t be challenged too much by the much warmer Atlantic waters around equator. On her first voyage in the late 1980s, “Sevmorput” sailed from the shipyard in Kerch on the Crimean Black Sea coast via the Mediterranean to the same path she now follows in the South-Atlantic. The ship continued around Africa, the Indian Ocean, the Malacca Strait, made a port call in Vietnam before sailing further to Vladivostok.

The intended idea to boost the Soviet Union’s cargo-freight with East-Asian countries and the Russian Far East became no success, as port authorities denied the ship access because of its nuclear propulsion. This was only a few years after the Chernobyl-accident. Instead, the freighter was used on the Arctic route between Murmansk and the port of Dudinka by the Yenisei River.

“Sevmorput” is well suited to deliver cargo along the north coast of Siberia, where little harbor infrastructure is developed. Sailing in the ice, lighters and other cargo can be unloaded on the ice outside the coast and towed to shore on the ice by trucks or bulldozers. But that wasn’t either a big success in the troubled economic period following the break-up of the Soviet Union. For several periods in the 1990s and 2000s, the ship stayed in port in Murmansk for years without sailing. In 2008, the ship was officially laid-up and in 2012 the plan was to scrap it. In 2013, however, it was decided to do renovation and in autumn 2015, the ship was again test-sailing the Barents Sea. The following year, “Sevmorput” was back in regular service and has in the lastest years delivered cargo to military installations in the Russian Arctic, as well as to the petroleum development along the Siberian coast. Equipment has been delivered to the Pavlovsk lead-zink mine development on Novaya Zemlya, and both in 2019 and in 2020, voyages with seafood cargo have taken place between Petropavlovsk in the Far East and St. Petersburg via the Northern Sea Route and around Scandinavia.

“Sevmorput” can carry 74 lighters or 1324 containers. Judging the images before leaving port in St. Petersburg earlier in October, the ship is pretty much loaded to capacity with the modules for new the Antarctica Vostok research station.

The modules for the Vostok research station was test-assembled in St. Petersburg before disassembled for  shipment. According to Roshydromet, the Federal Service for Hydrometeorology and Environmental Monitoring, “Sevmorput” has an estimated time of arrival to Antarctica on November 1. Arriving in Tala Bay, where Russia has a research station, the modules will be unloaded onto the ice and transported to shore using tractors. The operation is scheduled to take two to three weeks.

From Tala Bay, the transport distance to Vostok in the inland of Antarctica is about 1,400 km. Construction work on Vostok will take place during Antarctic summer seasons, lasting from November to February for three years, until 2023.

The new Vostok base is partly paid by Novatek, a Russian private owned company producing liquid natural gas on the Yamal Peninsula in the Arctic.

This is the first time a nuclear-powered civilian ship arrives to Antarctica. It is, however, not the first time nuclear-power is utilized on the continent. During the 1960 and early 1970s, the United States’ McMurdo Station was powered by a medium-size, portable nuclear reactor. The operation of the reactor proved not to be a success, both for economical and for technical reasons. After several incidents and contamination of soil, it was decided to shut down and decomission the power-plant in 1972.