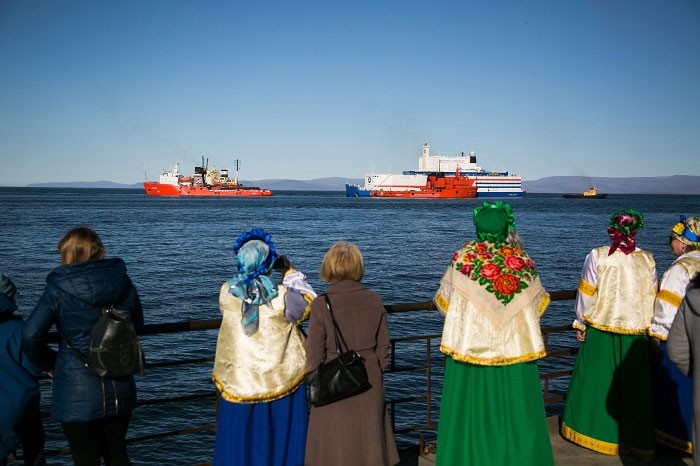 Locals in Pevek greet the coming of floating NPP Akademik Lomonosov in 2019. In few years, several more NPPs might come to the region. Photo: Rosatom

Nuclear power company Rosatom intends to build five floating NPPs in the Chukotka Peninsula that will serve several mining projects in the area.
Read in Russian | Читать по-русски
By

According to Aleksandr Bengert,  the small-scale nuclear power stations will serve the Baimskaya mining area. If the project is approved, the building of port infrastructure will start in 2023, he told corporate newspaper Strana Rosatom. The first two NPPs might be ready on site already in course of 2026, he explains.

Bengert is newly appointed leader of the Hydrographical Company, a subsidiary unit under the powerful state-owned Rosatom.

The new port installations are planned built in Nagleyngyn, a cape located on the western shore of the Chaunskaya Bay in Chukotka. Nearby is the town of Pevek, where Rosatom already operates the Akademik Lomonosov floating nuclear power station.

The power will be used for the development of several mines in the region, among the gold and copper project Peschanka. The Baimskaya mining zone is located in the Bilibino area in the western part of Chukotka and includes several major mineral and metal deposits.

Nearby is also the Bilibino NPP that has operated since 1974. However, the nuclear power plant is due to be fully closed in 2025.

In addition to port facilities and the floating NPPs, the mining projects in Chukotka also includes the building of major new road infrastructure and open pits.

Environmentalists have voiced concern about the plans. In September 2020, a group of young locals staged a protest against the plans, saying that local environment will suffer and life conditions for indigenous people deteriorate, TASS reported.

Developments might proceed quickly in the area as the plans are expected to get the necessary approval. The Hydrograpahical Company is ready to start building of port infrastructure and dredging in the nearby water. More than 20 billion rubles will be invested by the company, Aleksandr Bengert says.

The Hydrographical Company was acquired by Rosatom in 2019 and previously engaged primarily in seabed mapping and underwater surveys. However, with the takeover by Rosatom, the company has a become heavily involved in the building of new infrastructure for industrial projects across the Russian Arctic. The engineers of the Hydrographical Company are now engage both in the Gulf of Ob and the Utrenneye terminal building. In the course oof 2020, more than 30 million tons of seabed masses were removed from the shallow bay to make way for big-scale shipping in the area. Over the next couple of years, vast more volumes of seabed will be removed.