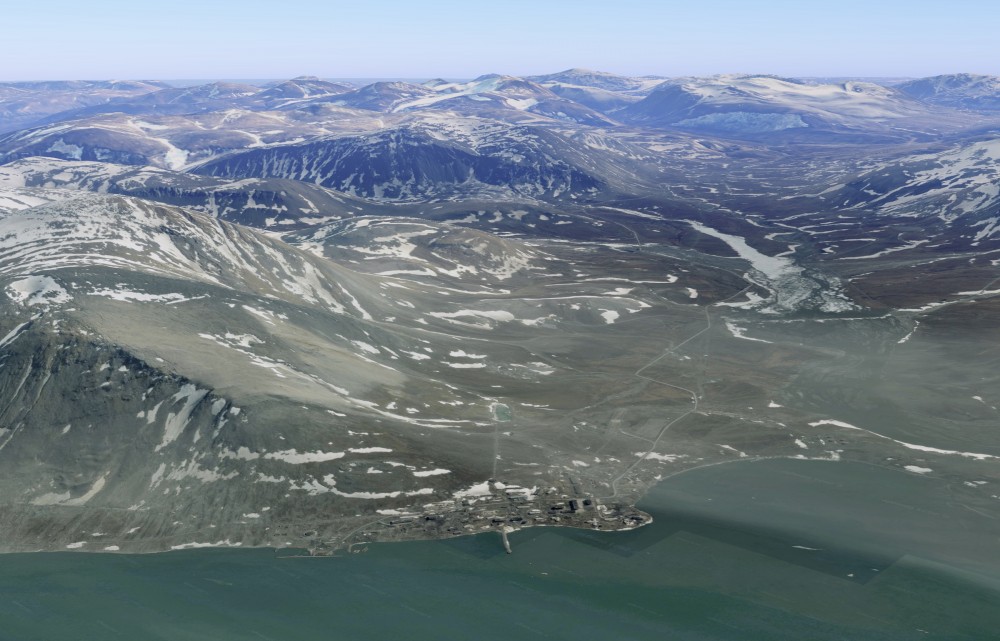 From the military settlement of Severny, roads can be seen south in the valley to the different tunnel entrances where nuclear tests are conducted. Image: Google Earth

The Defence Ministry’s own TV channel Zvezda on Sunday broadcasted a nearly 40 minutes long unique documentary about one of Russia’s top-secret military units, the Central Test Site at Novaya Zemlya.

Established in the mid-1950s, a total of 132 nuclear weapon tests are carried out at the archipelago in the period until October 24th 1990. Much less is told about the activities after President Mikhael Gorbachev the year after announced a unilateral nuclear test moratorium.

“Non-nuclear experiments are being carried out to confirm the reliability of the existing nuclear ammunition,” said the head of the Defence Ministry’s 12th Main Directorate, Major General Igor Kolesnikov, from his office in Moscow.

Non-nuclear experiments do not mean that weapons-grade material is not included. Simply, it means experiments are carried out but with no nuclear yield.

For example, such a test could include a small portion of plutonium, enough to explode, but not enough to reach a critical mass and therefore not create a self-sustaining chain reaction, or a nuclear bang. The effects of a full-size bang are then validated in advanced computer simulations.

“I must say that the United States is doing the same, they are also conducting similar experiments in Nevada,” Kolesnikov said in the interview with TV Zvezda.

Sub-critical tests are allowed under the Comprehensive Test Ban Treaty (CTBT). However, carrying out such tests in tunnels deep into the mountains in the far remote Novaya Zemlya have caused speculations that real, although very small, nuclear explosions could happen without the global network of monitoring stations would be able to detect it.

In 2019, a senior US official with the Defence Intelligence Agency said Russia is “probably” not adhering to its commitment under the CTBT, pointing to activities at the test site at Novaya Zemlya.

Middlebury Institute of International Studies at Monterey has made public an online comprehensive interactive map of the different tunnels and infrastructure near Severny. Based on satellite images over years, the researcher at the institute could identify the construction of a new facility.

Most of the filming in the documentary is from the area around Belushya Guba, the main settlement on the southern island of the archipelago. Here, new buildings are erected and more will come. Latest military vehicles, weapons systems and radars are brought here over the last few years. The military airport is upgraded and anti-terror drills regularly take place at the security facilities where nuclear material is either stored or made ready for transportation.

The tunnels where subcritical nuclear tests are conducted is more than 200 km north of Belushya Guba. The entrance to the tunnels into the mountains can be seen when zooming in on Google Earth along the valley heading south from the military settlement Severny on the shore of the Matochkin Strait.

It was on the north side of this strait the infamous monster size (50 Mt) Tsar Bomba was detonated on October 30, 1961.

The 12th Main Directorate of the Defence Ministry is responsible for all nuclear weapons in Russia, their technical maintenance, transportation, storage, testing, delivery, safekeeping and disposal. At Novaya Zemlya, this Directorate rules the society.