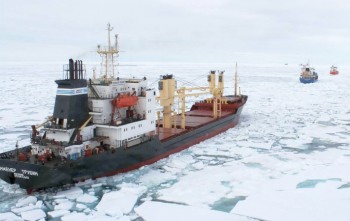 Lawson W. Brigham is a Global Fellow at the Woodrow Wilson International Center for Scholars in Washington, DC and a research faculty member at the University of Alaska Fairbanks (UAF).

Currently a member of the National Academies Polar Research Board, Dr. Brigham is also a Fellow at the U.S. Coast Guard Academy’s Center for Arctic Study & Policy. Captain Brigham was a career Coast Guard officer and commanded four cutters including the polar icebreaker Polar Sea on Arctic & Antarctic expeditions; he also served as the Coast Guard’s Chief of Strategic Planning, Director of the Work-Life Study, and Coast Guard Liaison Officer to the Chief of Naval Operations.   During 2004-09 he was chair of the Arctic Council’s Arctic Marine Shipping Assessment and for two decades served on a team developing the International Code for Ships Operating in Polar Waters (IMO Polar Code) for the Interntaional Maritime Organization.  Dr. Brigham has been a Marine Policy Fellow at Woods Hole Oceanographic Institution, and a faculty member of the U.S. Coast Guard Academy, Naval Postgraduate School, and UAF as Distinguished Professor of Geography & Arctic Policy.

He is a graduate of the U.S. Coast Guard Academy, a Naval War College distinguished graduate, and received his PhD from Cambridge University in the UK.  His research interests have focused on the Russian maritime Arctic, Arctic marine safety & environmental protection, polar climate change, polar geopolitics, and strategic planning. Dr. Brigham is an elected member the Council on Foreign Relations and the Norwegian Scientific Academy for Polar Research.  A central peak in the Gonville & Caius Range, Victoria Land, Antarctica was named Mount Brigham in January 2008 by the U.S. Board of Geographic Names.