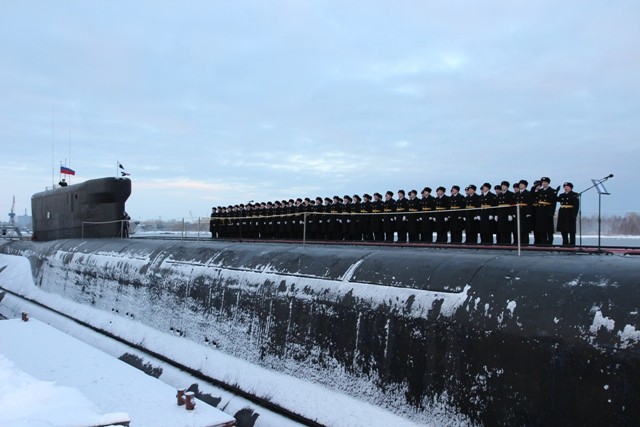 "Vladimir Monomakh" - One of Russia's ballistic missile submarines of the Borey-class. Photo: Sevmash

If the launch is successful, or even in case only the launch mechanisms work normally, the submarine will be taken into active duty in the Russian Navy, a military source says to news agency TASS.

“According to plans, “Vladimir Monomakh” will be launching two Bulava missiles from underwater position in the White Sea to the Kura range on the Kamchatka peninsula no later than November 16. There will not be any more launches of the Bulava missile this year,” the source added.

Third of eight planned Borey-class submarines
“Vladimir Monomakh” is the third submarine of its class, Borey. Russia plans to build a total of eight Borey-class strategic submarines by 2020. The class is Russia’s first post-Soviet nuclear-powered ballistic missile submarine design, and will form the backbone of the Navy’s strategic nuclear deterrent force after older vessels are retired.

The submarines are constructed at the huge Sevmash shipyard in Severodvinsk outside Arkhangelsk.

The first submarine of the class, “Yury Dolgoruky”, was taken into service in the Northern Fleet in January 2013 after twelve years of construction. The second submarine, “Aleksander Nevsky” was taken handed over to the navy in December 2013, while “Vladimir Monomakh” was delivered in December 2014. The two last mentioned submarines will be taken into service in the Pacific Fleet and be based in Vilyuchinsk, Kamchatka.

“Aleksander Nevsky” has already transferred from the Northern Fleet to the Pacific Fleet along the Northern Sea Route. It arrived in Vilyuchinsk on September 30, according to TASS.

“Vladimir Monomakh” is planned to sail the same route in August-September next year, TASS’ source says.

As the Independent Barents Observer reported, “Yury Dolgoruky” recently returned from a two-month long Arctic mission which included sailing under the ice cap.

Watch video about “Vladimir Monomakh” on TV Zvezda (in Russian).

Russia has been conducting tests with the Bulava missile since 2004. Until 2009, there were 6 failures in 13 flight tests and one failure during ground test, blamed mostly on substandard components. After a failure in December 2009, further tests were put on hold and a probe was conducted to find out the reasons for the failures. Testing was resumed one year later, and of the ten tests that have been conducted since then, only one has failed, according to Wikipedia.