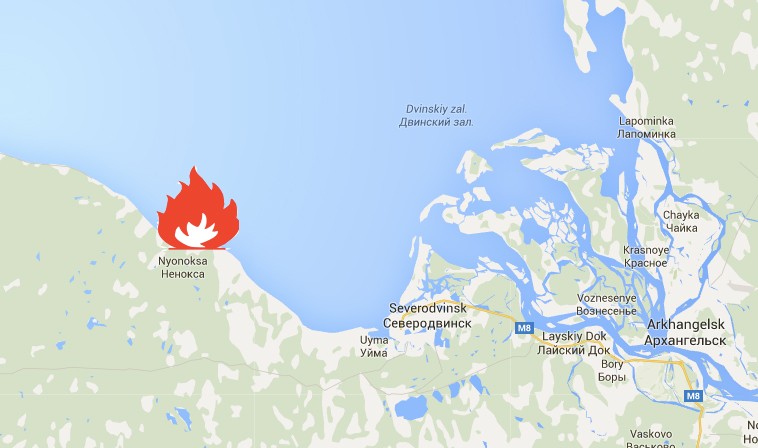 Malfunctioned during a test shooting and fell into the three-store house in the village of Nyonoska in Arkhangelsk Region.
By

The military first denied any involvement, but Russia’s Ministry of Defence later on Tuesday confirmed it after several local media reported about the missile crash.

It was a test shooting of a cruise missile that went wrong. Fragment of the missile crashed into the three-storey residential building on Boronova street No. 9 in Nyonoska, News29 reports.

The regional news agency later reported that the house also had a kindergarden for children up to 3-years old on its ground floor.

Nyonoska is near the coast of the White Sea, some 40 kilometres west of Severodvinsk.

The building caught fire and four apartments were damaged, but no casualties have been reported.

“Experts from NPO Mashinostroyeniya carried out a test launch of a cruise missile. As a result of an emergency ituation the missile deviated from its flight plan and fell not far from the village Nyonoska in the Arkhangelsk Region. A special committee is currently looking into the matter,” reads the short note issued from Russia’s Defence Ministry on Tuesday evening, quoted by TASS.

News29 has posted photos of the apartment block.

It is not clear what kind of cruise missile that was tested. NPO Mashinostroyeniya develops both land-based and sea-based cruise missiles.

The missile was likely launched from the nearby test-site for intercontinental ballistic missiles, cruise-missiles and anti-aircraft missiles. Thousands of test-launches have been carried out from the polygon since the 50ies.