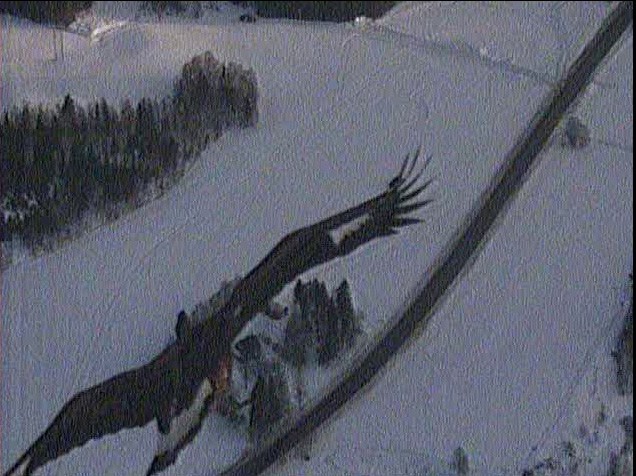 The drone's own photo of the eagle just before the attack. Photo: Forsvaret.no

Military personnel were filming the Cold Response exercise when their drone suddenly was attacked by an unexpected enemy. Watch the drone's video of the attack.
By

The Norwegian Army drone pilot was operating a  RQ-11 Raven mini-UAV, a small remotely controlled plane with a camera, which is used in surveillance operations by the Armoured Battalion of the Brigade North during the 15.000 men large Cold Response exercise.

Watch the video from the drone:

Less than 60 minutes from take-off, the drone came under attack from an unlikely assailant, the Armed Forces’ website reads.

“We were cruising steadily and conducting surveillance on Swedish tanks in our area. Suddenly an eagle appeared, and I witnessed a spectacular situation unfold,” the drone operator said.

“We were floating in the up drifting wind and hardly running at any engine power, when out of the blue a large eagle came less than eight meters from the drone. At first we did not understand what was happening, but the eagle launched an attack on the drone,​” he explains.

The eagles in Trøndelag apparently do not take kindly to competitors in their air space.

The Raven drone has an automatic return-to-base function, and the pilot was desperately trying to override the function and manually return the aircraft to its point of origin. But the drone was so badly damaged in the eagle attack that is crashed, and was later recovered by Norwegian soldiers.

“The drone had clear scratches from the eagle’s claws,” the operator said.

Dutch police have started training eagles to take out small drones, and the Metropolitan Police in London is also considering using eagles to intercept drones amid concerns the aircraft are increasingly used to commit crime.