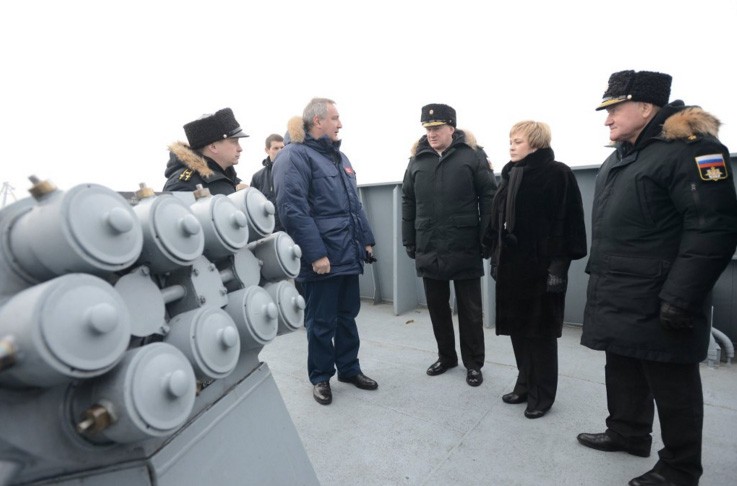 During his visit to Murmansk, the deputy premier pays visit to the «Admiral Kuznetsov». In summer, the ship could be sent to Syria.
By

The Russian government representative responsible for military-industrial affairs did not reveal much about his visit to Murmansk yesterday. But his Twitter account shows that deputy prime minister visiting the aircraft carrier «Admiral Kuznetsov» and news agency TASS quotes him saying the ship is being upgraded «in order to serve the motherland, including in remote waters».

The «Admiral Kuzentsov» is Russia’s only aircraft carrier and speculations have long been pending about the ship’s possible deployment in the Mediterranean, along the Syrian coasts.

As previously, a high-ranking official in the Russian Navy recently confirmed that that a voyage to the Mediterranean Sea is planned for this summer and that the ship «will lead the Navy group in the region”.

“Admiral Kuznetsov” is Russia’s only aircraft carrier and belongs to the Northern fleet. When not sailing, the vessel stays at port at naval yard No. 35 in Murmansk, next to the country’s homeport of nuclear powered icebreakers.

The Northern fleet already has its antisubmarine vessel “Vice-Admiral Kulakov” in the Mediterranean sailing together with the missile cruiser “Varyag” - the flagship of the Pacific fleet.

During his visit to Murmansk, Rogozin also visited the «Admiral Gorshkov», the new 4500 tons heavy, 135 meters long Russian frigate which is about to enter duty in the Northern Fleet.

Murmansk based aircraft carrier prepares for a summer by the Mediterranean