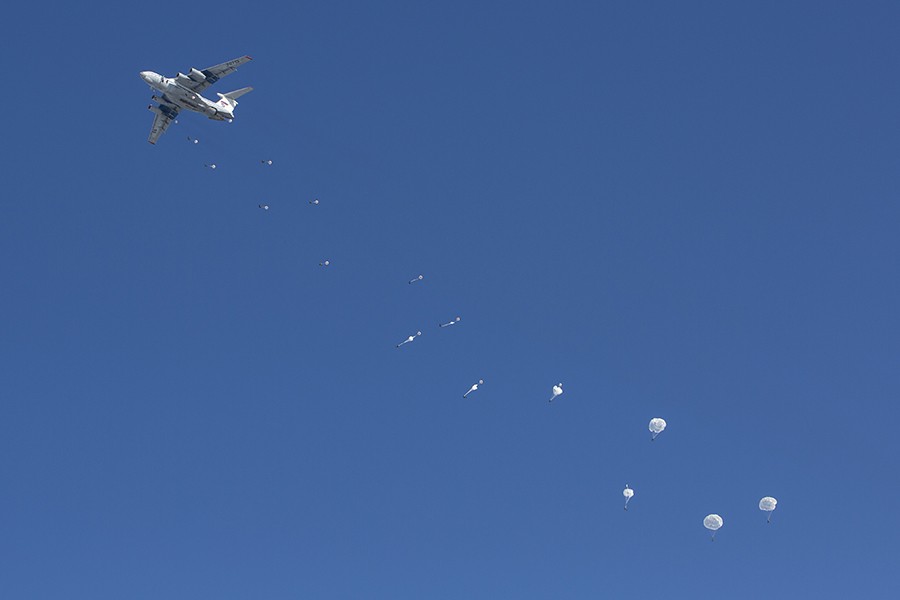 Russian airborne forces are preparing exercises close to the North Pole. During the preparations instructors and dog teams plan to land at Longyearbyen airport on Svalbard.
By

This action could be in violation with the regulations of the Svalbard Treaty.

Russia airborne forces are planning a larger airdrop followed by an exercise close to the North Pole. The airdrop will probably take place within the coming weeks. The soldiers that will take part in the exercise are now undergoing courses in operations in extreme conditions, the Ministry of Defense reports.

Preparations to the exercise are carried out in cooperation with the Russian Geographical Society’s Expedition Center, who is organizing the annual Barneo ice station.

As the Barents Obserer reported, the technicians preparing this year’s camp and runway close to the North Pole, have had huge problems finding an ice floe solid enough, and are right now constructing a new 1200 meters long runway, as the previous one was destroyed by cracks in the ice.

The Expedition Center uses Svalbard as a base for transport of cargo and equipment for Bareno, which is transported to the floating ice station using an An-74 airplane specially designed for landing on snow-covered runways in Polar areas.

The An-74 plans to bring to instructors and dog sledges for the airborne drill to Longyearbyen, the Expedition Center’s Facebook page reads:

“In Moscow they’ll assemble platforms for airdrops tomorrow. The next day these platforms will be transported to Murmansk and loaded with barrels of fuel. Our An-74 will also fly there with the rest of the equipment for the camp, as not to make an extra technical flight from Longyearbyen to Barneo. In Murmansk the fuel and equipment will be made ready to be dropped over Barneo. [On its way back ] The An-74 will bring to Longyearbyen instructors and dog sledges for the Airborne forces’ exercise.”

Also military personnel from other countries in the Collective Security Treaty Organization will take part in the exercise. Belarus, Kazakhstan and Armenia have all expressed a wish to take part in exercises.

Demilitarized Svabard
This use of Svalbard as part of preparation to military exercises could be in conflict with the Svabard Treaty. Article 9 prohibits naval bases and fortifications and also the use of Svalbard for war-like purposes. The Norwegian Government in its White paper on Svalbard explains that “All foreign military activity in Svalbard is prohibited and would entail a gross infringement of sovereignty.”

“Unless they involve innocent passage through territorial waters, foreign military and civilian government vessels wishing to enter Norwegian territorial waters around Svalbard must apply well in advance for diplomatic clearance. The same applies to calls at ports in Svalbard and landings at airports. […] The Norwegian authorities follow very restrictive practice with regard to granting such clearance.

Third year of Arctic airborne drills
Russia has conducted airborne drills in the high Arctic the last two years. In April 2014 more than 90 paratroopers from the Ivanovo-based 98th Airborne Division jumped from an Ilyushin Il-76 airplane onto Barneo.

Watch video of a parachute drop in the Arctic on TV Zvezda.