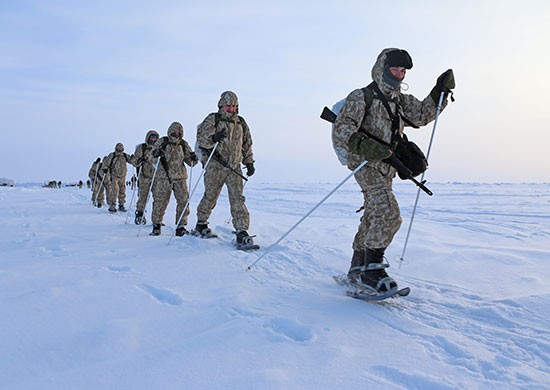 Some 100 paratroopers from the Airborne Troops based in Pskov and a unit from the CSTO Collective Rapid Response Force from Belarus jumped onto the ice on Thursday.
By

About the same time as Chechen special forces were welcomed as heroes in Grozny after a historic exercise on the North Pole, Russian airborne forces started their Arctic drills for the third consecutive year.

The airdrop was done from Il-76 airplanes at a height of 1,500 meters. The troops used “Arbalet-2” parachutes, which are designed for extreme conditions, the Ministry of Defense’s website reads.

The troops conducted drills on search and rescue and survival in Arctic conditions. According to TASS, the soldiers should be evacuated from the North Pole on April 25.

The Russian Airborne Troops cooperated closely with the Russian Geographical Society, which runs the Barneo temporary ice station. Polar experts from Barneo held lessons for the soldiers in Arctic survival, this report from Vesti shows.