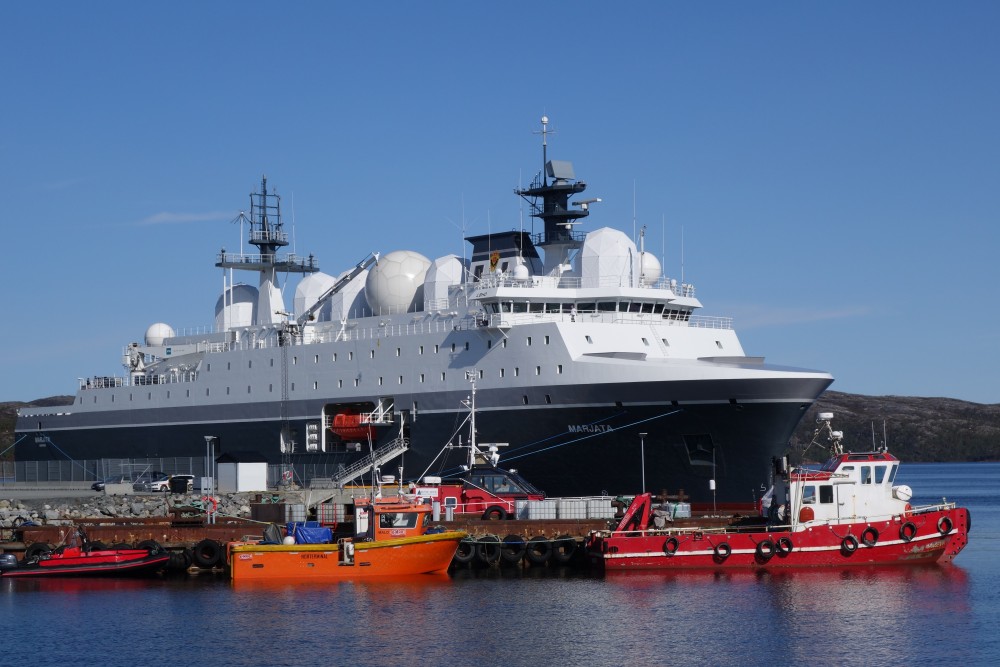 The new "Marjata" at port in Kirkenes. Photo: Atle Staalesen

Packed with radar- and communication humps on the roof, the 125-meter long new “Marjata” came to Kirkenes Monday morning.
Read in Russian | Читать по-русски
By

“Marjata” (the forth intelligence vessel in a row with the same name) will sail northern waters to keep track of Russian military activity in the north.

This weekend, the Barents Observer reported that submarines with Russia’s Northern fleet have completed more combat drills during the winter season than anytime before in Post-Soviet history.

Like the former “Marjata” the new vessel will have Kirkenes, on Norway’s eastern coast of Finnmark, as her homeport.

With a construction cost of NOK 1,5 billion (€160 million) the new intelligence vessel is one of the most expensive military investments in Norway in modern times.

Morten Haga Lunde, Chief of Norway’s military intelligence, said earlier this winter that the new “Marjata” represents renewal and innovation in many ways.

“But also a tradition through continuation of our presence in the Barents Sea.”

“Control with the development in the High North is of strategic importance for Norway.”

“The Parliament’s decision to invest in a new intelligence vessel is an important signal that Norwegian presence in the north is of high priority.”

Russia is currently renewing its fleet if nuclear powered submarines sailing for the Northern Fleet. Last year the first 4th generation muti-purpose submarine of the Yasen-class made port call to her homeport in Zapadnaya Litsa, only 55 kilometres east of Russia’s border to Norway.

Also new ballistic missile submarines of the Borey-class sails the Barents Sea loaded with nuclear weapons. It is believed that one of Marajata’s missions is to keep track of Russian submarines and monitor naval exercises.