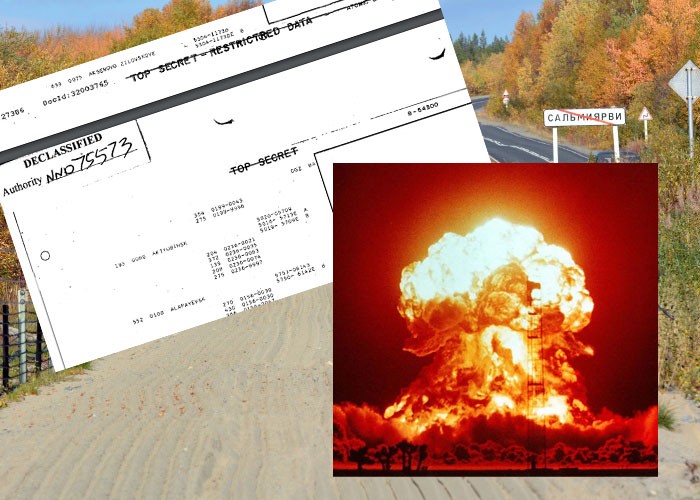 The Soviet Border Guards station located a few hundred meters from the border to Norway was during the early days of the Cold War one of 47 nuke targets in the regions of Murmansk, Arkhangelsk and Karelia, recently declassified data reveals.
By

The files penned by U.S. Strategic Air Command (SAC) for the Pentagon are from 1956 and used in a 1959 nuclear weapon requirement study.

That study lists priorities of nuclear bombing tactics and targets in case the unthinkable worst case scenario of a break out of nuclear war should happen these early days of the Cold War.

Scary for NATO member Norway, three of the targets of priority in the former Soviet Union were very close to bordering Finnmark County. The Norwegian settlement of Svanvik is less than 2 kilometers from a possible ground zero detonation over Salmijervi across the Pasvik River.

The target list is likely the most comprehensive declassified nuclear weapons’ strategy document ever made public from early Cold War times. The documents contain a total of 1,100 nuke targets in the former Soviet Union and Eastern Europe.

It is the National Security Archive, based with The George Washington University, which has obtained the study, totaling more than 800 pages. In the United States, old secret documents can be opened for public through the Mandatory Declassification Review process.

The Independent Barents Observer has read the files with special focus on listed targets in the Murmansk Oblast, Arkhangelsk Oblast and the Republic of Karelia.

The U.S. Strategic Air Command also points to the numbers and types of nuclear weapons required to destroy each target, although that information is blanked out in the released documents, the National Security Archive writes in their introduction to the files.

By late 1950ies, the Kola Peninsula was of strategic importance for the Soviet Union, both because of its proximity to NATO member Norway, but first and foremost because of the navy’s access to ice-free waters in the Barents Sea and from there to the North Atlantic. Some few submarine bases, Ura Guba and Polyarny were already established, but the larger naval bases for submarines, like Zapadnaya Litsa and Gadzhievo were first built later during the Cold War.

The Soviet Northern Fleet got its first nuclear powered submarine, the K-3 “Leninsky Komsomol” in 1958.

According to the files, 20 locations on the Kola Peninsula could be prioritized nuke targets. Of them, Murmansk City had multiple targets. Three of the targets where along the border to Norway: Nautsi (south of Rajakoski), Pechenga district (marked near the town of Nikel) and Salmijervi.

Other locations were likely listed because of their military installations or industrial production sites. Even far remote settlements like Yokanga (Gremikha) and Ponoy were included.

Written in 1959, the study is made before the first intercontinental ballistic missiles (ICBM or SLBM), so nuclear weapons would have to be delivered by bomb planes.

In addition to the city of Murmansk, also Arkhangelsk and Petrozavodsk are cities mentioned for multiple targets.

In the High Arctic, two locations at Novaya Zemlya and one on Franz Josef Land could be bombed with nuclear weapons.

An interactive map with all 1,100 targets in the former Soviet Union and Eastern Europe have been made by The Future of Life Institute.

(All locations in the list below are spelled in the American way from the original documents).