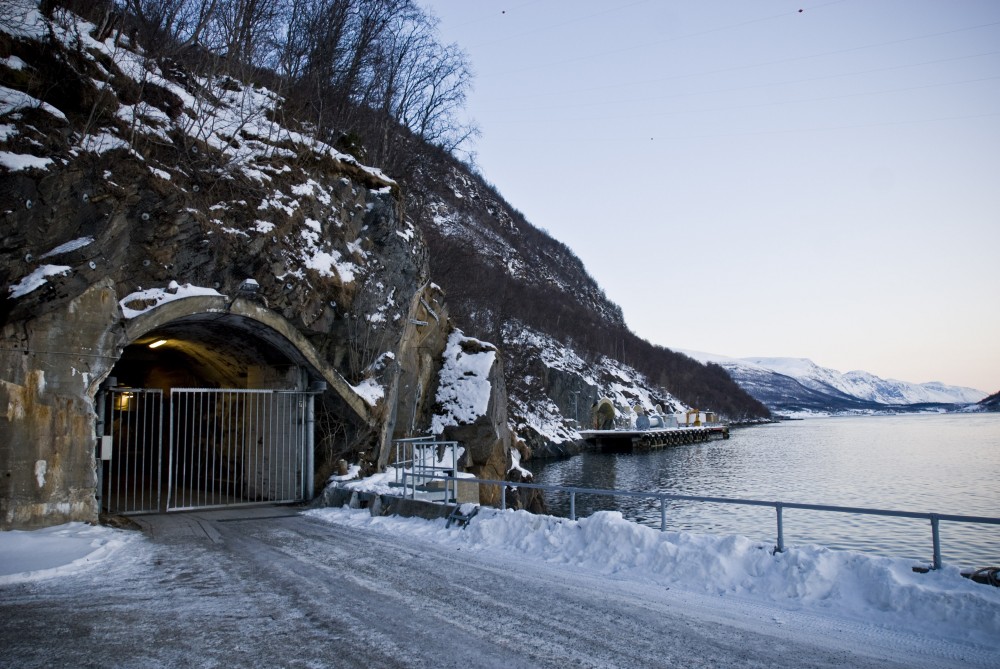 Entrance to the mountain tunnels. Behind is the seaside entrance where submarines could sail in for supply and support until Olavsvern base was closed down in 2008. Photo: Erik Drabløs / Forsvaret

NATO and partner nations do not currently possess the ability to quickly counter the Russian undersea challenge in much of the North Atlantic and Baltic Sea, according to the Center for Strategic & International Studies.
Read in Russian | Читать по-русски
By

«The former Royal Norwegian Navy base at Olavsvern is ideal for supporting submarine operations in the extreme North Atlantic and Arctic Seas,» reads the recommendation by the study group that since last autumn has looked into the new challenges arising as Russia dramatically has increased submarines’ sailings.

With scope to see how NATO countries in the region can build a more capable and integrated defense architecture to better address Russian undersea activity, the study group highlight Olavsvern supply base outside Tromsø.

Russia’s gateway to the Atlantic

Increased activity of Russian submarines has led to renewed U.S. and NATO interest in monitoring the Greenland-Iceland-UK gap, a strategic chock point that represents the Russian Northern fleet’s gateway to the Atlantic Ocean.

For NATO, maritime priorities in the North Atlantic make priority to monitor Russia’s naval activity, ensure free flow of goods and security of critical infrastructure such as sea lines of communication remain open, and finally; maintain capacity to defeat and respond to aggression.

Off the coast of Northern Norway, these priorities are achieved by monitoring and tracking submarines sailing in- and out from Russia’s Northern fleet bases on the Kola Peninsula.

During the Cold War, Norwegian as well as allied submarines used Olavsvern near Tromsø as a supply- and service base for sailings in the Norwegian- and Barents Seas. From Olavsvern, the distance to the deep waters in the Norwegian Sea where Russian submarines had to sail was short. Also, Olavsvern was NATO’s closest naval base to Russia’s submarine bases along the coast of the Kola Peninsula west of Murmansk.

State Secretary Øystein Bø in Norway’s Ministry of Defense says to the Barents Observer that there has been an significantly increase in Russian military activity close to Norway.

«We see better quality and complexity in the Russian training and exercise activity,» he says.

«Russia has a legitimate right to practice and train their forces. Meanwhile, we expect activities to happen in accordance with Russia’s international commitments, and in a way that does not cause increased uncertainty,» Øystein Bø says.

He calls for more transparency and trust-building measures in order to prevent misunderstandings and increased tension.

In the years after the fatal accident with Russia’s «Kursk» submarine in August 2000, the Norwegian navy and Russia’s Northern fleet have arranged several joint exercises in northern waters. That cooperation got a sudden halt after Moscow’s annexation of Crimea in March 2014.

The CSIS-report says the United States needs to leverage its bilateral relationships with Norway in order to develop and deploy a new generation of undersea sensing capabilities. Earlier this year, Norway’s new intelligence gathering vessel «Marjata» started to sail northern waters. The vessel has Kirkenes near the border to Russia as homeport and the sophisticated electronic intelligence collection equipment on board is delivered by the United States.

The report further recommend to streamline maintenance among the NATO members operating aerial anti-submarine surveillance in the North Atlantic and Baltic seas. Today, Norway has an old fleet of Orion aircrafts at Andøya airbase and may acquire new P-8 aircrafts as replacements. Both such aircrafts and other maritime patrol capabilities should have common payloads that will cut costs and dramatically improve interoperability.

Last week, Norwegian media reported that a study group from the U.S. Navy recently was visiting both Andøya and Evenes airports in northern Norway. The task was to see if any of the two airport could be suitable to serve as a base for American P-8 Poseidon patrol aircrafts. The CSIS-report also recommends the United States to reopen Keflavik on Iceland as a support facility for rotational NATO and partner [Sweden and Finland] anti-submarine warfare (ASW) activities.

Olavsvern could be “nationalized” and reopened

The main reason to again use Olavsvern as a support facility for NATO allied submarines is the long distances to the high north from existing naval bases in Europe and north America.

«NATO submarines used this strategically important base as a resupply hub when conducting long ASW patrols of the region,» CSIS argues and continue: «While reopening the entire facility may be cost-prohibitive, it may be possible for Norway to nationalize and reopen a portion of the facility to support the rotational presence of U.S., UK, French, and Norwegian submarines.»

«During the time since the base was closed in 2008, the Navy has developed other infrastructure in northern Norway to fill its operational needs and it’s made significant investments at for instance Ramsund,» Øystein Bø tells arguing there ain’t any needs to re-establish military activity at Olavsvern.

«The facility is currently fully civilian and privately owned,» State Secretary Bø says.

Olavsvern was sold to the company Triko AS in February 2013, just one months after Russia’s new 4th generation ballistic missile submarine (SSBN), «Yury Dolgorukiy» was commissioned to Russia’s Northern fleet. Since then, two other SSBNs have entered service. Additional brand new multi-purpose submarines, like the «Severodvinsk» are currently test sailing northern waters and more are in pipe. Tomorrow, on the Russian Navy’s Day July 29th, the 6th Yasen-class submarines, to be named «Perm» will be laid down at the naval yard in Sevmash near Arkhangelsk.

In February this year, Vice-Admiral Clive Johnstone, Commander of NATO’s Maritime Command, said that the Alliance sees «more activity from Russian submarines than we’ve seen since the days of the Cold War.»

He also underlined that the intentions are unclear. «A lot of what the Russians are doing at the moment we don’t understand, and is obscure.

Suspicion of irregular activity is a police matter

The CSIS-reports says criticism against selling Olavsvern intensified when the private investors’ group went to lease parts of the facility to a Russian firm with links to Gazprom.

Øystein Bø says to the Barents Observer that the owner uses the facility as he want and the military has neither the authority to impose restrictions on it’s use, or authority to control civilian vessels at anchor there.

«Any suspicion of irregular activity is a matter for the police and judicial authorities.»