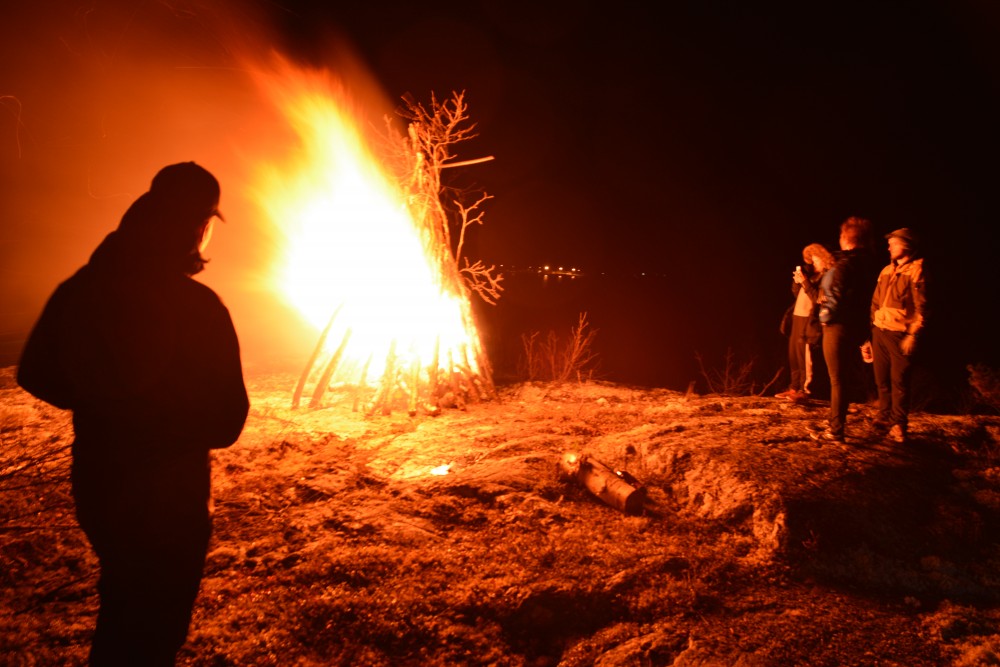 On border to Russia, a bonfire in protest against Norwegian defense cuts

«Peace does not come by itself», says Nina Karin Skogan as she and a group of companions light up a huge fire just few hundred meters from the Russian border.
Read in Russian | Читать по-русски
By

«We need a balanced and credible national defense which can protect our democracy, our freedom, our peace»,  Skogan underlined in an address delivered yesterday on a height near Storskog, the Norwegian border crossing point to Russia.

«We are gathered here today to light this fire in a protest against the government’s draft development plan for the Armed Forces», Skogan highlighted, as her son Brage started to put fire to a huge pile of wooden chunks stacked up in the shape of a rocket.

It took a few minutes to make the wood piles catch real fire. But when it started to burn it lid up the area like a lantern. Next by were standing about 15 locals participants, all of them people with strong bonds to the Armed Forces.

Ceremonies like the one at Storskog were yesterday evening held all over Norway. According to the initiators of the country-wide initiative, a total of 123 fires lightened up the dark Norwegian sky, from the very south to the north and east.

The reason is the proposed defense cuts aimed at the country’s Army and especially the Home Guard. According to the government plan, the Home Guard will be reduced from 45,000 to 35,000 troops by year 2020. That has triggered major protest all over the country. The Home Guard forces constitute quick response units based in local towns and settlement. They safeguard territorial integrity, protect important infrastructure, support national crisis management, strengthen the military presence and provide support to civil society.

The government defense plans include the utter eradication of the Naval Home Guard Command, which today includes four intervention forces and 17 areas with capabilities in maritime surveillance and control.

Only few years ago, the Norwegian Home Guard counted 83,000 men and women.

The people behind the protest initiative demand that Norway gradually increases its military spending to two percent of the country’s national budget and that measures are taken to preserve and strengthen the Home Guard.

The protest movement comes as the geopolitical situation in the region appears more unpredictable than in decades. Across the border, neighboring Russia is quickly building up its military capacities and is displaying its willingness to use power, also abroad.

Just in Pechenga, the municipality bordering on Norway, Russia might have more soldiers than the whole Norwegian Armed Forces compiled.

Nina Karin Skogan, leader of the local union of female volunteers (Lotteforbundet),  underlines that she and her companions were not lighting their fire at Storskog as a symbolic action aimed at the Russians. But she admits that it is a way of showing presence.

«This is where we live and we have a high level of consciousness about that», she says.