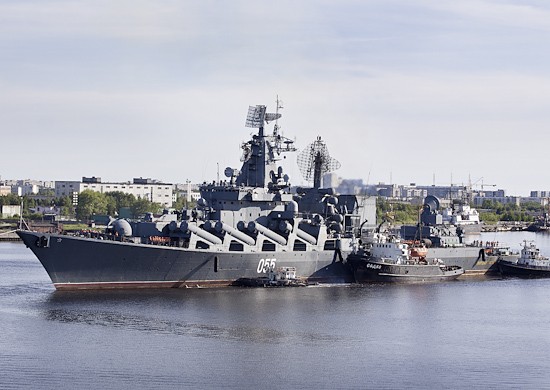 The "Marshal Ustinov" in Severodvinsk for repairs. Photo: mil.ru

After more than five years of repairs, Slava-class cruiser «Marshal Ustinov» makes it out at sea.
Read in Russian | Читать по-русски
By

The «Marshal Ustinov» on 30th October left the Zvezdochka yard in Severodvinsk, northern Russia, and started sea trials in nearby waters.

Since the ship came to Severodvinsk in 2011, the yard has repaired the ship’s gas turbine generators and engines, as well as general vessel systems and radio-electronic armament, a press release informs.

During the sea trials, representatives of the yard will along with the Ministry of Defense and the vessel crew conduct testing of all the ship systems «under real maritime conditions».

The «Marshal Ustinov» is one of Russia’s three Project 1164 (Slava-class) vessels. It was included in the Soviet Navy in 1986. With its powerful Bazalt missile system, the ship is among the most powerful in the Russian Navy. It also holds a wide range of other weaponry among them eight S-300F rocket complexes and two Osa-MA complexes, as well as a 533 mm torpedo system, two RBU-6000 Smerch-2 rocket launchers, AK-130 naval guns and AK-630 rotary cannon system, the Russian Navy informs.

The cruiser is due to be handed over to the Northern Fleet before the end of 2016, Zvezdochka says.