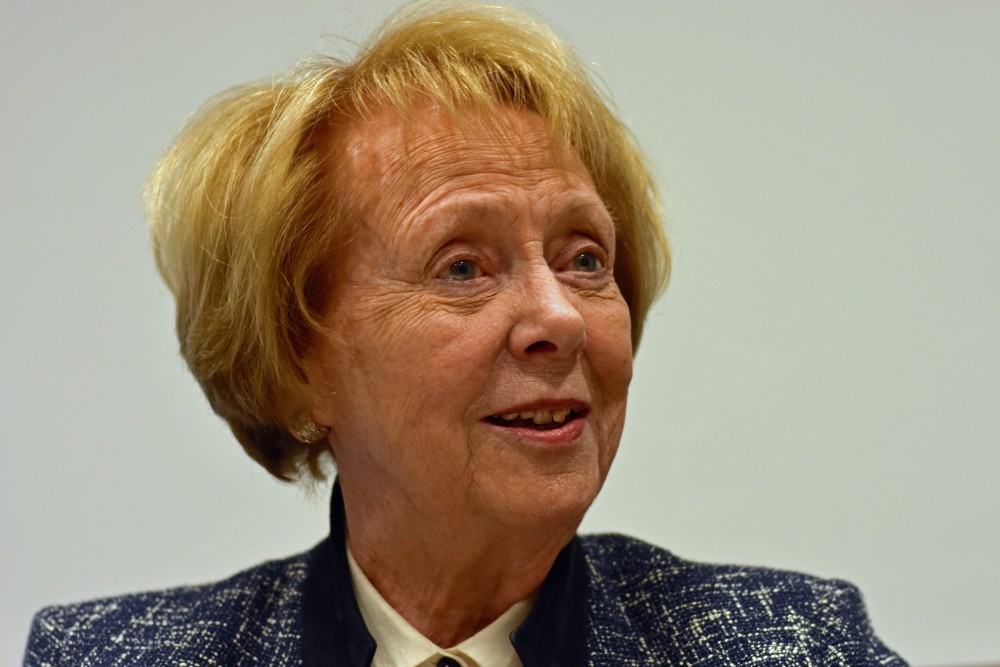 Vigdís Finnbogadóttir was President of Iceland from 1980 to 1996. Photo: Thomas Nilsen

“What now happens in the world is utterly awful,” Vigdís Finnbogadóttir

The former Icelandic President is not optimistic thirty years after Ronald Reagan and Michael Gorbachev’s Reykjavik meeting that marked the beginning of the end of the Cold War.
Read in Russian | Читать по-русски
By

“Of course they are welcome if they choose Reykjavik to discuss. Of course,” smiles Vigdís Finnbogadóttir when asked by the Barents Observer about the Icelandic capital’s room to host another top meeting between the Presidents of USA and Russia, thirty years after the one that became historic in October 1986.

“But,” she says with a more serious facial expression; “I don’t think they will come.”

Vigdís Finnbogadóttir, or just Vigdís among Icelanders who are used to name each other by the first name, is following US elections with great interest. In 1980, she herself became the world’s first democratic elected female President. Hillary Clinton could be the first female President to take office in the United States.

Gender equality and women’s rights are issues of great importance for the dedicated lady that served as President on Iceland for 16 years. Earlier this week, some 7,000 people demonstrated for equal women’s rights outside the Althingi, the Icelandic parliament in the centre of Reykjavik. And that is a big crowd in a country with only 320,000 inhabitants.

On Saturday, the people of Iceland went to polling stations to decide who will be leading their government for the coming four years. Parliamentary elections follow the resignation of Prime Minister Sigmundur David Gunnlaugsson in April, after the Panama Papers revealed that he and family members had money in offshore accounts. Political chaos has together with economic rise-and-fall, eruption from Eyjafjallajökull volcano and booming tourism become Iceland’s trademarks over the last decade.

The Pirate Party became the third largest in the Althingi and elections turnout was historic low.

Accused of being a communist

In her first presidential election campaign 35 years ago, Vigdís Finnbogadóttir was accused of being a communist because of her resistance against the US Naval Air Station at Keflavik airport. With an air-force group, maritime surveillance aircrafts and various personnel from the US Army, Keflavik was an important NATO base throughout the Cold War because of Iceland’s strategic location in the North-Atlantic.

“I’m a peace person. I was called communist because of that [resistance against Keflavik-base]. And I was asked if I had communist thoughts. I said no,” Vigdís tells.

She says it was Ronald Reagen’s people in the State Department that first suggested to arrange a top meeting on Iceland. Michael Gorbachev was newly elected General Secretary of the Communist Party of the USSR. The Soviet leader had just proposed banning all ballistic missiles, a turnaround compared with the hard wordings from Kremlin and Washington D.C. over the decades before.

End of the Cold War

Vigdís tells with detailed memory about the meeting on the 11-12 October 1986 that afterwards has been hailed as an enormous breakthrough in ending the Cold War.

Ronald Reagan arrived already the day before and was met by the Icelandic President as he came out the door from his plane. “Reagan got an official reception, but Gorbachev came the day after and then we couldn’t be at the airport because this was the day when our Althingi opened,” Vigdís says.

“He was supposed to land at 2 pm, but then it was opening of Althingi and both the President and the Government then have to be in Althingi. We informed about this, but Gorbachev’s flight route over the Scandinavian countries was not possible to change, they replied.”

The Soviet Ambassador to Reykjavik was later removed from his position because he failed to bring the correct message to Moscow in time.

The Summit was held in Höfði, a historical house by the seaside in Reykjavik. Vigdís Finnbogadóttir recalls how they solved the security at the Summit.

“We have no army, no defence. So the mountain-rescue service was called in, those who are up in the mountains to save people. The white house was surrounded by people dressed in orange,” she laughs.

“It was so outstanding.”

This was the second time Gorbachev and Reagan met. The Reykjavik Summit nearly concluded a radical agreement on dismantling U.S. and Soviet nuclear weapons. Talks, however, broke down at the last minute. Despite no signing of any formal agreement, the two sides noted considerable progress in disarmament talks, with both Ronald Reagan and Michael Gorbachev gaining a clearer idea of how far the other side was willing to go and to compromise.

The Reykyavik Summit was later written into history as the start of the end of the Cold War.

“The door had been opened”

“We were all very disappointed. Because we thought something would be signed, a kind of Helsinki Act, or a Lausanne Treaty, but that didn’t happen,” Vigdís tells.

She remember that Ronald Reagan shorthly afterwards went to the American Naval Air Base at Keflavik to meet U.S. soldiers. The base is a one hour drive from the Icelandic capital.

“But Gorbachev, he went to the largest cinema-centre in Reykjavik and had a big press-meeting. Personally, I went to Faroe Islands to talk fisheries that day. Then I went to Rome, and there, in the door of the plane, I met Andreotti and he asked: How was he? What kind of person is he,? with reference to Gorbachev,” the former Icelandic President tells.

Giulio Andreotti was at the time Foreign Minister of Italy, one of many Western leaders that looked at Gorbachev’s Glasnost and Perestroika with a growing optimistic amazement.

“We were very disappointed that no agreement was reached, but we knew that the door had been opened,” she says.

“And just three years later the Berlin Wall came down.”

What happened at Reykjavik resulted in the Intermediate-Range Nuclear Forces (INF) Treaty signed by the two heads of states in Washington D.C. a year later.

Some few weeks ago, Russia sent Iskander missiles to Kaliningrad, a move that probably puts the 1987 INF Treaty in a lot of trouble. Iskander can carry nuclear warheads and Kremlin argues the move comes as a response to the U.S. Anti-Ballistic Missile system deployed with radar in Romania and interceptor missiles in Poland.

When asked about the current state of affairs globally, Vigdís Finnbogadóttir raises her eyebrows with a worried facial expression. She takes a two second pause and looks up.

“I think we already live in some kind of Cold War. What now happens in the world is utterly awful,” she says.

“And fortunately, I would say that Hillary Clinton is more a peace person than Donald Thrump. I think we all can agree on that.”