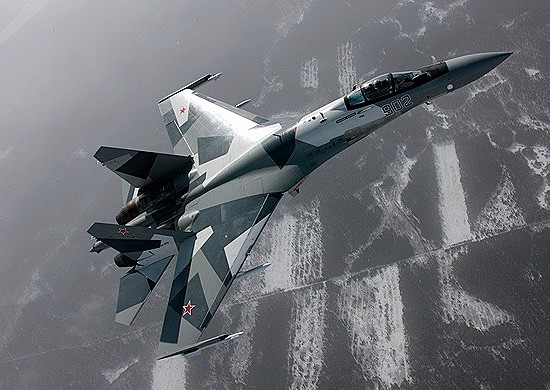 A fleet of new Su-35S is on its way from the factory in Russia’s Far East to the air base of Besovets, few kilometers from the border to Finland.
Read in Russian | Читать по-русски
By

The first four aircrafts of the type arrived in Karelia in mid-November. A second party will arrive in early December, the Russian Armed Forces inform.

The fighter jets will be permanently based in Besovets, the airport and air force base in the Republic of Karelia.

The Su-25S is one of Russia’s newest fighter jets. It is a modernized version of the Su-27. The planes are produced at the Komsomolsk-on-Amur Aircraft Production Association (KnAAPO).

The 8,000 km flight from Komsomolsk-on-Amur to Karelia are scheduled with two refueling stops in airports, mil.ru informs.

The new aircrafts are believed to become part of the 159th Fighter Aviation Regiment, blogger website bmpd.livejournal writes. Until early this year, the regiment was equipped with only aircrafts model Su-27 and Su-27UB. Then, a group of modernized Su-27SM entered the fleet.

As the modernization of the regiment is completed in 2017, the fleet will include squadrons of both Su-27SM and Su-35S, as well as Su-30M2 and Su-30SM, bmpd.livejournal reports.