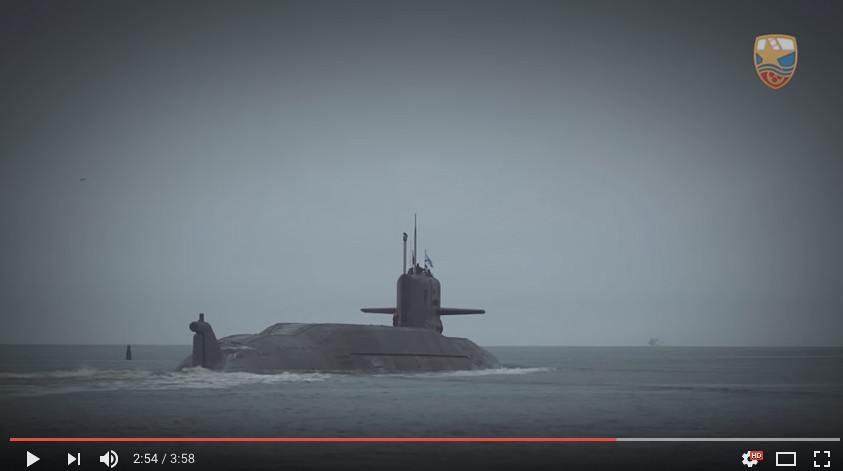 Screenshot of the video showing the departure of “Podmoskovye” uploaded to YouTube by Zvezdochka shipyard.

“Podmoskovye” can carry mini-submarines aimed at detecting and protecting underwater intelligence cables in the Barents and Norwegian Sea.
Read in Russian | Читать по-русски
By

It is not everyday a Russian shipyard uploads a video to YouTube screening a secretive nuclear powered submarine that sails on her maiden voyage.

The “Podmoskovye”, a rebuilt Delta-IV class, is not any normal vessel, as reported by the Barents Observer three weeks ago when the first sea trails started in the White Sea.

To be deployed with the 29th separate submarine brigade of the Northern Fleet, this submarine plays a core part of Russia’s sub-sea intelligence gatherings linked with the Main Intelligence Agency, GRU.

The submarine can also bring - or remove - other small installations and divices for military purposes to be placed on the sea floor. Such devices can make noice to distract foreign submarines when Russian submarines sail out from the Kola Peninsula to the North Atlantic. Other listening devices can detect sounds made by the propellers of enemy submarines.

Lifting sensitive equipment from crashed aircrafts, other vessels or even satellites from the seabed are other tasks to be carried out by the submarine.

“Podmoskovye” can carry mini-submarines and has a dedicated section for scientific-experimental equipment. The vessel is also known as BS-64.

The 29th separate submarine brigade is located at Gadzhiyevo naval base on the Kola Peninsula’s Barents Sea coast. Here, the other mini-submarine carrier BS-136 “Orenburg” is also based. So are the fleet of seven highly secretive nuclear powered mini-submarines, according to Wikipedia’s Russian pages.

Russia’s special purpose mini-submarines are known with the NATO classification as X-ray and Uniform-class, in addition to the Losharik. These are submarines that can dive much deeper than other submarines.

It took 16 years at the yard in Severodvinsk to refit and commission “Podmoskovye”. The missile section is removed. Instead, as visible in the video published by Zvezdochka, special structures on deck make it possible to carry a mini-submarine.

The video can be viewed in the embedded YouTube player and is the courtesy by Zvezdochka shipyard.