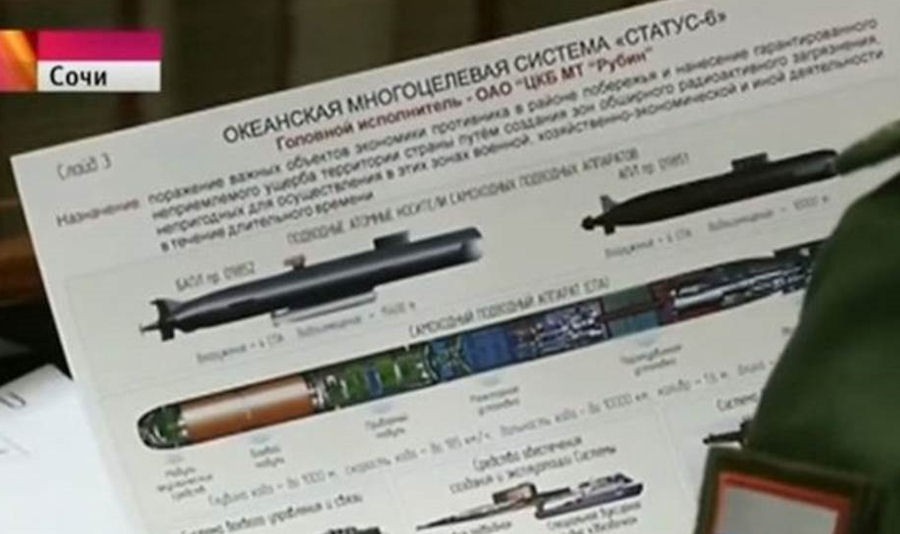 Screenshot from Russia's Channel One of the Status-6 Ocean Multipurpose System.

What Pentagon names Kanyon is what in Russia is known as the «Ocean Multipurpose System Status-6» - a top secret weapon system the world has never seen anything like before.  A year ago, Russian state-TV Channel One showed a glimpse of a graphic slide of the Status-6, later on said to be an unauthorized leak of a secret weapon development plan.

The drawings on the slide could very well be a purpose leak aimed at telling the world what weapon-systems are under development. The TV news covered the meeting in Sochi where President Putin was told by high-ranking officers in the Strategic forces how Russia’s nuclear deterrence strategy is developing. Moscow are looking for ways to overcome the United States’ Anti-Ballistic Missile Defence system, and one answer is to go deep with the nukes.

A drone diving down to 1,000 meters could go undetected with its payload to the American east coast.

Designed to cause devastating damage

Status-6 is a torpedo-like vehicle that according to the leaked image may be a long as 80 feet, powered by a small nuclear reactor and with a range of 10,000 kilometers. The scary part is the warhead, believed to be a giant megatons thermonuclear weapon.

“The drone is designed to destroy important economic installations of the enemy in coastal areas and cause guaranteed devastating damage to the country’s territory by creating wide areas of radioactive contamination, rendering them unusable for military, economic or other activity for a long time,” reads the translation BBC made from the slide shown by Channel One.

Speaking to the BBC, Konstantin Sivkov with the Russian Geopolitical Academy says a 100 megatons warhead could produce a tsunami up to 500 meters high, wiping out all living things 1,500 kilometers deep inside US territory.

Reporting about Status-6, Russian military magazine Nationalnoye Oborona, recalls a torpedo project idea developed by Andrey Sakharov in the early 60ies. A torpedo with a 100 megatons thermonuclear weapon and a range of 30 kilometers and was supposed to be delivered from a November-class submarine sailing near to coastal waters of the United States. The project was canceled, mainly because such warhead would be far to big in size to fit those days’ torpedoes.

In 1961, the Soviet Union tested the most powerful thermonuclear weapon ever exploded in the atmosphere. The so-called Tsar-bomba was 58 megatons and exploded over Novaya Zemlya in the Arctic. The blast was visible from eastern Finnmark in Norway, 900 kilometers away.

According to the slide shown on Channel One last year, Status-6 drone will be carried by the nuclear powered submarine «Khabarovsk» currently under construction at the Sevmash yard in Severodvinsk.

«Khabarovsk» is likely the most secret one-of-a-kind submarine currently under construction in Russia. Its hull is like the Borey-class SSBN, but shorter and instead of carrying ballistic missiles this submarine will carry six Status-6 drones.

For the test-phase, the drone is carried by «Sarov» - another secretive special purpose submarine sailing out from Severodvinsk.

If the drone really was tested in open waters in late November like the Pentagon source claims, it would likely been in the White Sea or eastern Barents Sea where the Russian navy tests new submarines and missiles.

New submarines are tested in an area south of the Kola Peninsula between Umba and Kandalaksha bay where the White Sea is deepest. Testing of a nuclear powered drone could have taken place here. New naval missiles are normally tested in the Barents Sea where the navy has several areas for weapons testings.

It could also have been an onshore test of the reactor, steam turbine, gearing system and jet-pump.

Norway is traditionally keeping an eye on military developments and naval capacities in the Russian north. Bordering Russia in the Barents Sea, intelligence gathering is part of the game.

Asked about a possible test of the Status-6 weapon system, Head of Communication with the Norwegian Intelligence Service Kim Gulbrandsen says to the Barents Observer that the service refuse, on principle, to comment on such individual cases.

Nils Bøhmer with the Bellona Foundation in Oslo has monitored safety questions related to Russia’s nuclear submarine fleet since the early 1990ies. He says to the Barents Observer that testing of nuclear powered drones can cause serious concerns.

“If we assume that this is a nuclear powered drone, it is reasonable to believe the reactor, although small, has much less protection against leakages of radioactivity than other nuclear powered vessels. Additional reasons for concern is that such drone will be remotely operated. That increases the chances of something going wrong,” says Nils Bøhmer.

In the 1980ies, the Soviet navy commissioned the Mike-class nuclear powered submarine, a unique deep diving sub aimed at bringing torpedoes with nuclear warheads undetected to the east coast of the United States. With a hull of titanium the submarine could dive to 1,000 meters and by that avoid NATO’s SOSUS subsea listening system. The submarine was one answer to Ronald Reagan’s Star Wars ABM plans.

Only one submarine of the class was commissioned, the “Komsomolets” that sank in the Norwegian Sea after a fire in April 1989.