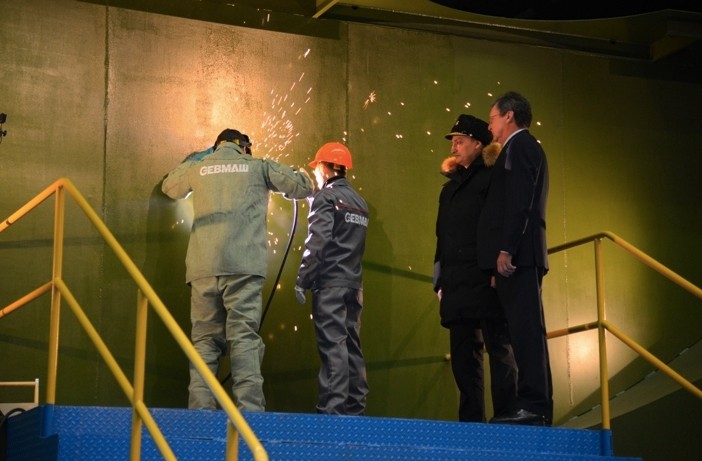 «Definitely, we are not stopping with this», Viktor Bursuk said as shipyard Sevmash on 23rd December officially launched construction of the strategic submarine «Knyaz Pozharsky». «Like any other industry, shipbuilding is moving forward in an evolutionary process», Bursuk added in the ceremony organised at the yard in Severodvinsk, northern Russia.

«On an order from the Navy, the Rubin Design Bureau for Marine Engineering has started to create a new missile carrier, which will be built here, at the great Sevmash, the crown jewel of our country», the Deputy Navy Commander said, a press release from the yard reads.

Not much is know about the new vessel, which will be Russia’s fifth generation sub. It will be designed by the bureau which have developed more than 80 percent of all Soviet and Russian submarines, and built by the yard which today constructs all the country’s nuclear vessels of the kind.

A the moment, five Borey-class vessels are under construction at Sevmash. That includes the «Knyaz Pozharsky», the latest, and last, of Russia’s Boreys.

The «Knyaz Pozharsky» is like its fellow «Knyaz Vladimir», «Knyaz Oleg», «Generalissimus Suvorov» and «Imperator Aleksandr III» a Borey-A vessel. Three other Borey-class subs, the «Yuri Dolgoruky», the «Aleksandr Nevsky» and the «Vladimir Monomakh» have already been handed over to the Navy and are in full operation.

The Borey and Borey-A submarines will for decades ahead constitute the backbone in the Russian Navy’s nuclear strategic capacities.

The Borey-class vessels can operate on depths down to 480 meters. It has an underwater top speed of 29 knots and can operated autonomously for 90 days. It has a crew of 107 people.