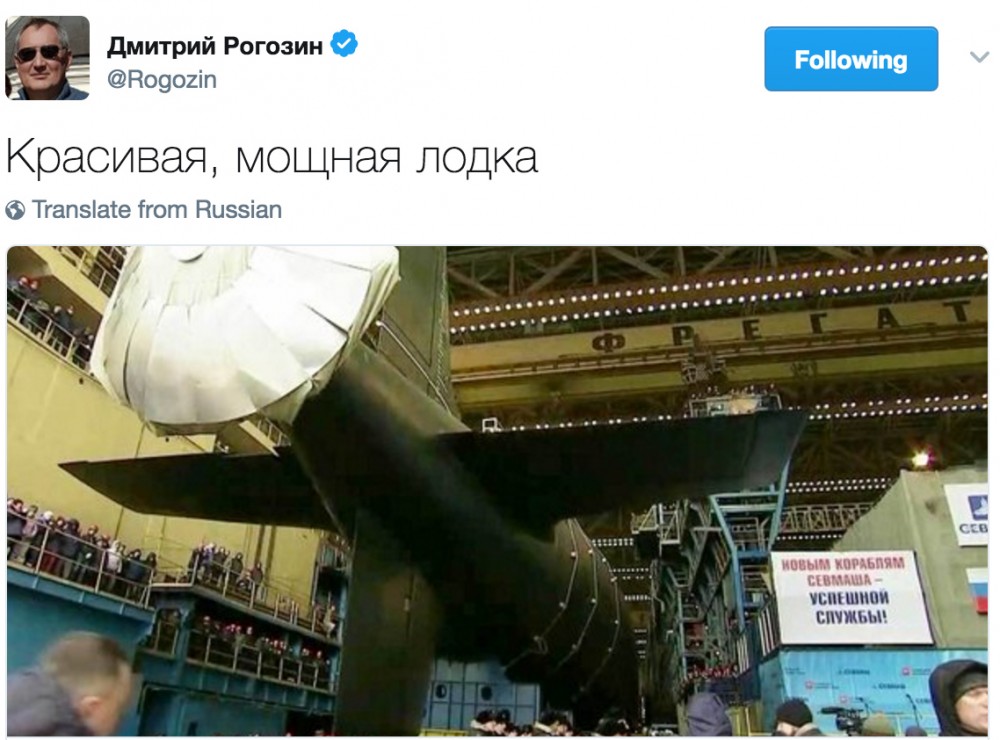 Yesterday, Putin stressed that Russia’s military activities in Arctic threaten no one. Today, another brand new cruise-missile sub was set on water.
Read in Russian | Читать по-русски
By

«What we do, is contained locally, while what the US does in Alaska, it does on the global level,» Vladimir Putin said in his speech at the Arctic Forum: Territory of Dialogue conference in Arkhangelsk on Thursday.

Rogozin went directly from the conference where peace and international cooperation was highlighted, to Severodvinsk, a city less than an hour drive from Arkhangelsk where all of Russia’s modern nuclear powered submarines are built.

«Beautiful, powerful boat,» Rogozin tweeted from dock in Severodvinsk after the official  ceremony where the vessel was floated out from the yard’s dock.

«Yesterday in Arkhangelsk we finalized the international forum «The Arctic: Territory of Dialogue» - Dmitry Rogozin said in his speech at the commissioning of the new submarine. He continued:

«But the dialogue must be supported by a firm and self confident voice. And we will always have such a firm and self confident voice when we have this kind of vessels, when our shipbuilders have this kind of results. On the behalf of the colleagues in the military industrial complex, on behalf of the Russian government I wholeheartedly thank you for your work,» first-deputy Prime Minister Rogozin said, according to the press service of Sevmash yard in Severodvinsk.

The submarine will now start factory acceptance tests before being handed over the the Navy.

«Kazan» is the second of Russia’s fourth generation multi-purpose submarines of the Yasen-class.

Heavily armed with cruise missiles and torpedoes, possible with nuclear warheads, «Kazan» will represent some of the deadliest weapons in the Russian Navy.

A total of eight Yasen-class submarines will be built. The first, named after the city it was built - «Severodvinsk» - was commissioned in 2013 and is already sailing for the Northern Fleet. Six more is currently under construction. The last one in the class will be laid later this year.

«Kazan» is even more advanced than «Severodvinsk» - both regarding weapons, sonar, and on board electronics.

«Severodvinsk» is based in Zapadnaya Litsa, the westernmost naval base on the Kola Peninsula, some 55 kilometers from Russia’s border to Norway on the Barents Sea coast. If «Kazan» will be based at the same location is not yet announced.

Russia’s 1st channel has posted this video from the ceremony in Severodvinsk on Friday.