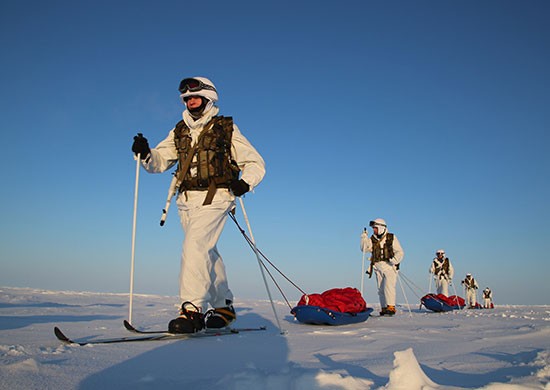 A group of soldiers from the country’s new military Expedition Center makes it through bad weather to the top of the world.
Read in Russian | Читать по-русски
By

There was zero visibility and the group had to circumvent major areas of open water. In stead of the planned 85 kilometers, the expedition strived through 100 km to reach the North Pole point, the Russian Armed Forces inform.

The group was headed by Mayor General Aleksey Obvintsev, leader of the Military Institute of Sports, and included several institute students.

These students will become specialists in physical training of soldiers executing operations in the High North, the Armed Forces say. During the expedition, they reportedly tested several kinds of new equipment including «physical preparation means for release of psycho-emotional stress and physical exhaustion».

Judging from photo material distributed by the Russian military, the expedition members were all equipped with Army gear and carrying automatic weapons.

The expedition comes only few days after a group from the FSB’s Border Guard service conducted training on the North Pole.

It is believed that both groups were flown in to Barneo, the Russian Arctic ice camp, from the Nagurskoye base in Franz Josef Land. In 2016, another Russian Arctic military expedition triggered a diplomatic scandal as the soldiers were flown to Barneo via the Norwegian archipelago of Svalbard.

This year’s expedition lasted seven days and was conducted under the auspices of Russia’s new military Expedition Center.

The establishment of the military Expedition Center was announced by Minister of Defense Sergey Shoigu in June 2016. The center includes eight units all over Russia, among them in Northern Fleet headquarters city Severomorsk.