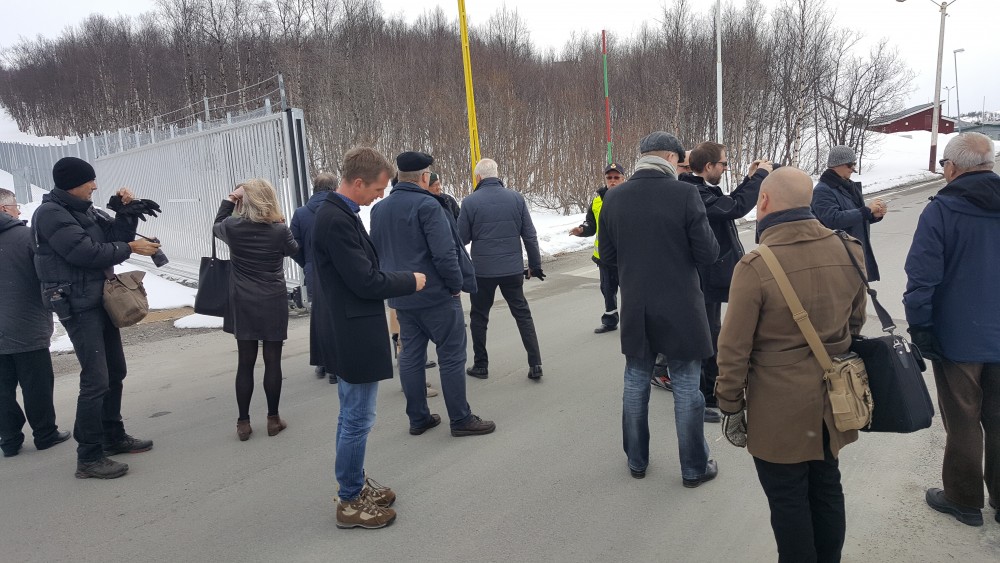 Members of the Sub-Committee on Transatlantic Defence and Security Cooperation could walk all the way to Norway's borderline with Russian at Storskog. Photo: Thomas Nilsen (See more photos from the visit in the end of the article)

When visiting Svalbard Moscow said it was “provocative”, but all was peaceful when the same lawmakers on Thursday walked all the way to Russia’s borderline with Norway.
Read in Russian | Читать по-русски
By

They are institutionally separated from NATO, but serves as the link between the Alliance and the parliaments of NATO member nations. This week’s study tour to Svalbard was, however, not well received by Russia.

The Ministry of Foreign Affairs in Moscow said “the attempts to bring Spitsbergen [Svalbard] under the wing of this military-political bloc and to hold meetings there are at odds with the spirit of the 1920 Treaty. We consider this to be a provocative policy.”

From Svalbard, 11 of the delegates travelled to Kirkenes, Norway’s border town to Russia on the mainland.

“For all countries with a border to Russia it is always important, actually, to understand how well NATO’s border is protected and what’s going on and how secure the border is. It is a NATO task to protect our common area,” says Marko Mihkelson, Vice Chairman of NATO Parliamentary Assembly’s Sub Committee on Transatlantic Defence and Security Cooperation.

Coming from Estonia, Mihkelson says protection of NATO border is the common duty of the alliance.

“It is extremely interesting for me to be here, it is the first time here in the high north, and see that the Norwegians do a very good job here protecting a common NATO border,” he said to the Barents Observer after visiting Storskog border checkpoint and two of Norway’s military border guard stations outside Kirkenes.

Storskog is the only place where it is possible for enter Norway from Russia. Normally, this is one of the border entry points to Schengen with very few problems. But in 2015 this became the road were over 5,000 migrants entered Norway from Russia in a few months period.

At Jarfjord military station, the NATO parliamentarians got briefings by the local police, the Garrison in Sør-Varanger and Norway’s Border Commissioner.

Marko Mihkelson is also Chairman of the Foreign Committee of the Riigikogu, the Estonian parliament. He underscores the importance of jointly contributing to the protection and strengthening of the borders.

“The world around us is fragile. We are not surrounding ourselves with walls, but we must not lose our watchfulness,” Mihkelson says. “Our internal security depends very directly on peace outside our borders.”

The other delegates came from France, Germany, Portugal, Greece, Luxembourg, the Netherlands and associate delegate from Sweden. Although Sweden is not a NATO member it joined NATO’s Partnership for Peace in 1994 and became a member of the Euro-Atlantic Partnership Council in 1997.

Norway has some 250 military border guards along the 196 kilometers landborder to Russia. In wintertime, they partol the border on skies or snowmobile, while in summer, ATVs are used in the terrain and boats are used for patrolling the Pasvik River.

Svalbard visit was no provocation

“For Norway the high north is of strategic importance and our cooperation here in the north with Russia continues. This is important to tell about,” Myrli says.

He dismisses Moscow’s accusations that the delegation’s study tour to Svalbard was provocative.

“We are not NATO as such, we are parliamentarians from NATO member countries,” Sverre Myrli explains. The Svalbard tour was aimed at getting a better understanding of various topics relating to developments in the Arctic, such as climate changes, maritime cooperation and new trade and business opportunities.

Moscow on the other side, is worried about the tensions.  “The escalation of tension is not in the long-term interests of the countries of Northern Europe and weakens, rather than strengthens, their security,” the statement from the Foreign Ministry says.

In the Pasvik valley, an hour drive from Kirkenes, the delegation got a good briefing about the ongoing Norwegian, Russian cooperation on envrionmental monitoring and research. Svanhovd Bioforsk has for the last 25 years been a hub for cross-border nature colaboration in the Barents Region. Among other things, the centre is home to the radiation protection authorities that deals with nuclear safety cooperation with Russia.