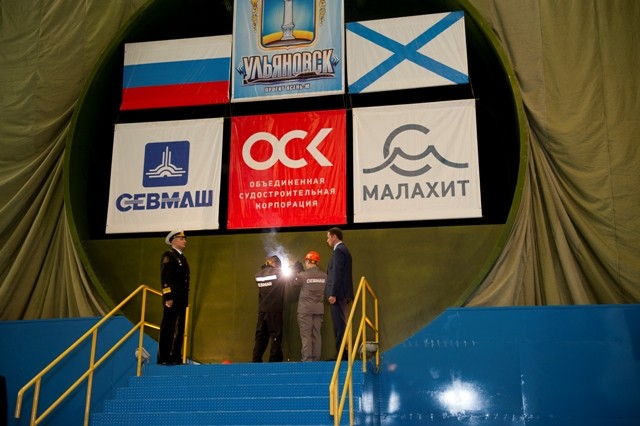 "Ulyanovsk" will be armed with eight cruise missile launchers and ten torpedo tubes.
Read in Russian | Читать по-русски
By

The Yasen-class submarine is one of the most secretive and expensive in the program for development of the Russian Navy, and in the state armaments program as a whole.

“Ulyanovsk” is the seventh Yasen class sub. The first, “Severodvinsk” was commissioned in December 2013 and is so far the only one in the class that sails for the Russian Northern Fleet. “Kazan”, the second sub in the class is launched, but not officially transferred to the navy. “Kazan” is currently undergoing factory tests.

Yasen class represent the most advanced nuclear powered submarines ever built for the Russian navy. The 140 metre long vessels are armed with the most advanced cruise missiles and torpedoes and is said to be Russia’s most quite sailing submarines. With a crew of 90, the submarine can dive to 600 metres and has a submerged speed of up to 28 knots.

The first vessel in the class, “Severodvinsk” has Zapadanaya Litsa on the Kola Peninsula as homeport. The base, located some 55 kilometres from Russia’s border to Norway, could also be homeport for other vessels in the class as they join the navy in the coming few years. Some of the vessels in the class are also expected to be attached to the Pacific Fleet.

The other Yasen class vessels currently under construction at Sevmash yard in Severodvinsk are “Novosibirsk”, “Krasnoyarsk”, “Perm” and “Arkhangelsk”. In addition, the yard is building five ballistic missile submarines of the Borey-class and several nuclear powered special purpose submarines.

The yard on the coast of the White Sea have never in post-Cold War times had more nuclear powered submarines under construction than today.