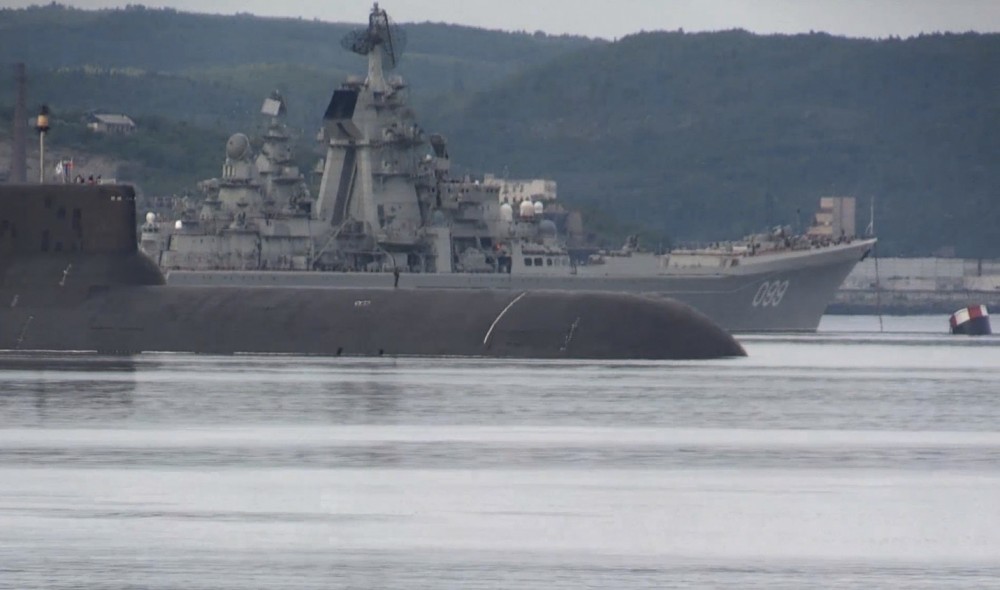 "Dmitry Donskoy" and "Pyotr Veliky" set off from Severomorsk. Photo: screenshot from mil.ru

The ships will have to make it the Kronstadt, the naval town near St.Petersburg, before 29th July when a grand celebration is planned in connection with the Russian Navy Day.

The more than 24,000 ton Kirov-class battle cruiser «Pyotr Veliky» is the flagship of the Northern Fleet. The Typhoon-class sub «Dmitry Donskoy» is the biggest submarine on earth. It will be the first time that a sub of this class will sail into the Baltic Sea.

The crews of the ships have ahead of their departure conducted a full cycle of basic battle training and preparations, the Northern Fleet informs.

In addition to the «Pyotr Veliky» and «Dmitry Donskoy», the Northern Fleet will be represented in St. Petersburg with the «Marshal Ustinov» and the «Vice-Admiral Kulakov». At least another six Russian Navy vessels will attend, presumably all of them from the Baltic Fleet.

Speculations have run high for several weeks about the time of departure of the vessels. It was previously believed that the submarine in late May left towards the Baltic.

Due to her size, the Typhoon-class sub will have to sail in surface position through Storebælt, the strait between the two Danish islands of Fyn and Sjælland before entering into the Baltic Sea.

Also, the Baltics are mostly shallow waters where a Typhoon submarine will have to be at the surface, at least for the most.

Most of the voyage takes place outside the coast of Norway. Press spokesperson with the Joint Head Quarters, Major Brynjar Stordal, told the Barents Observer that it is natural to keep an eye on such voyage.

“Naturally, we follow all military activity in our neighborhood, including this one,” Stordal says and points to the fact that Russia in open sources has told that this voyage will take place in the near future.

TK-208 «Dmitry Donskoy» is the only remaining Typhoon-class submarine in operation. Six vessels of the 172 meter long giant were originally built to assure the Soviet Union’s ability to respond to a nuclear attack with a powerful retaliation. Carrying 20 missiles and up to 200 nuclear warheads, the sub could stay hidden under the Arctic ice cap and assure a second-strike against the attacker.

Nowadays, «Dmitry Donskoy» does not carry nuclear weapons, but serves as a test-platform for the navy and is based in Severodvinsk by the coast of the White Sea. Between 2003 and 2010 a series of 14 new Bulava-missiles were test-launched from the submarine.

Commissioned in 1981, the submarine is one of the oldest still in operation in the Russian navy. Two 190 MWh reactors powers the steam-turbines providing power to the propellers.