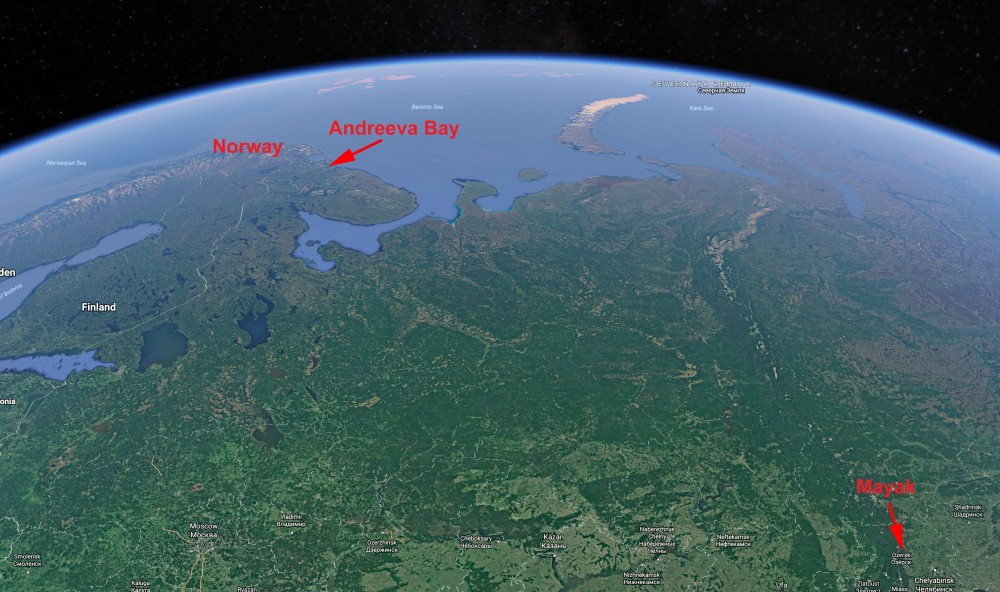 Mayak reprocessing plant i the South Urals is more than 3,000 kilometers from the Kola Peninsula. Map: Barents Observer / Google Earth

Now starts the reprocessing of Russia’s Arctic Cold War-era legacy next door the the plant where Stalin’s first nuclear bomb was made.
Read in Russian | Читать по-русски

The train carrying the first containers with spent nuclear fuel from the Northern Fleet’s rundown storage facility on the Kola Peninsula arrived on August 14, the information portal of Mayak informs.

Mayak is the enterprise in the closed town of Ozyorsk in the South-Urals where Russia’s only reprocessing plant for spent nuclear fuel is located.

Formerly known under the code-name Chelyabinsk-65, the secret town was the birthplace of Josef Stalin’s nuclear weapon program with several plutonium production reactors and processing plant for nuclear warheads material. Nowadays, the plutonium extracted from the reprocessing plant, is stored and could possible be used for so-called MOX-fuel, a mixture of uranium and plutonium for civilian nuclear power reactors.

The reprocessing plant to handle the fuel elements from Andreeva Bay storage, named RT-1, was first opened in 1977. From the early 1980ties, after Andreeva Bay stoped to receive more spent nuclear fuel from submarines, all uranium elements from the Northern Fleet and the Murmansk based fleet of civilian nuclear icebreakers were sent to the Mayak plant by train, from Murmansk and from Severodvinsk.

On June 27, the first batch with 470 spent fuel elements left Andreeva Bay. On the quay were both Norway’s Minister of Foreign Affairs Børge Brende and Rosatom’s Director General Alexei Likhachev.

«A historical day,» said Børge Brende. For Norway, the run-down storage with highly radioactive waste has caused concerns since it first became known in the early 1990ties. Distance to the Norwegian border is less than 60 kilometers and outside the coastline to the Barents Sea is the important fishing ground for cod.

«It is a big day for the environment, for Russian-Norwgian cooperation, for people in Finnmark and the Kola Peninsula and all the ones who care about the Barents Sea,» Brende told the Barents Observer at a press briefing following the event.

The containers left Andreeva Bay on board the special purpose vessel «Rossita» which brought it to Atomflot base in Murmansk. At Atomflot, the containers were lifted over to rail-wagons and the train has since then slowly moved the 3,000 kilometers long distance to the Mayak plant.

This train is the first of an estimated 50 train-loads to bring all 22,000 spent nuclear fuel elements from Andreeva Bay to Mayak. The work will take 5 to 10 yeras, depending on the condition of the fuel. Some of the older elements are damaged, but to which extent is hard to know before they are lifted out of the storage tanks in Andreeva Bay.

Historically, Mayak has a serious bad record of accidents related to its nuclear plutonium production. In 1957, an improperly stored underground tank of high-level liquid radioactive waste exploded, contaminating thousands os square kilometers between the cities of Chelyabinsk and Ekaterinburg. The accident, known as the Kyshtym disaster, led to evacuation of thousands of people from the area. In the late 40ties and early 50ties, much of the radioactive waste were dumped into the nearby Techa River contaminating the river banks in many villages downstream. There are still huge reservoirs with liquid radioactive waste in the area.

Environmentalists are still concerned about all the secrecy about safety standards at the Mayak plant.

Nils Bøhmer with the Bellona Foundation in Norway was attending the ceremony in Andreeva Bay on June 27 when the first spent nuclear fuel was shipped out. He calls on Norwegian authorities to exert pressure on Russia to get to know more about the reprocessing and storage in Mayak.

«Mayak is a black hole when it comes to accessible information. It is our moral responsibility to follow this up.»

That is confirmed by Nadezhda Kutepova, the environmental activist who was forced to flee from the town.

In an interview with the Barents Observer, Kutepova says that the Mayak’s reprocessing activities are dangerous and that it is a «very bad idea to send more waste».

«In reality, Norway can never check what happens there,» she said.

In addition to spent nuclear fuel from submarines and icebreakers, the Mayak plant reprocess fuel from Russia’s nuclear power plants with press-water reactors.

The local online newspaper Ozyorsk74.ru earlier this summer reported that the reprocessing plant has doubled its capacity over the past two years.