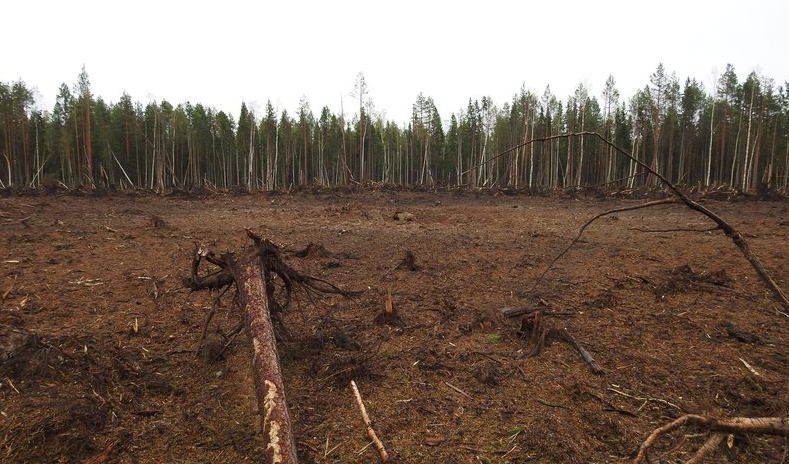 About one hectare of trees are blown away at the site in the forest some one and a half kilometers from the nearest village. Photo courtesy of Pinega municipality

Remember the huge circular impact zone in the forest outside Arkhangelsk last August? Well, now it is confirmed to be the first test launch of Russia’s new Yars-M intercontinental ballistic missile.
By

Locals in the village of Ust-Pocha in the Pinega district (Arkhangelsk Oblast) were all shocked by two huge explosions on August 25th last year. The powerful blasts could be heard from several tens of kilometers away and caused strong vibration in their houses.

When walking into the forest, one and a half kilometers from the village, people were met by a scene that could have been from the James Bond movie GoldenEye. Trees were scattered in a circle several hundred meters in diametre.

There was no meteor or metal scrap to be found in crater in the middle. No visible burns. Some Russian media reported it could have been a rocket launch that failed. Plesetsk, the northern cosmodrome, lies only some 170 kilometers, and locals in the villages in the Pinega district are used to see rockets launched from Plesetsk flying into orbit over their houses.

But, strangely enough, no rocket launched were listed that day. Officials from Plesetsk didn’t either provided any information afterwards. Until now, nearly a year later.

In July, the third book in the serie «Russia’s Northern Cosmodrome» were presented, and there, in the list of launches from Plesetsk, a short line reviled it all; on August 25th, 2016, the very first test-launch of the Yars-M ICBM took place.

The information was soon republished at a Russian discussion blog-site for strategic and tactical nuclear weapons. Pavel Podvig, an independent analysts who runs the research project «Russian Nuclear Forces» picked up the info and linked it to last year’s infamous forest flash outside Arkhangelsk.

Yars-M is a smaller and lighter version of the Yars intercontinental ballistic missile. Making it smaller, the Russian strategic missile forces can base the new missile into the new so-called Barguzin ICBM-carrying railway missile train, like Deputy Prime Minister DMitry Rogozin announced would be developed by 2018, RIA Novosti reported last month.

According to several British media, like the Daily Mail, a successful test-launch of the Yars-M missile was done from Plesetsk in early November, just over two months after the launch of the missile that crashed in the forest 170 kilometers from the launch-pad in August.