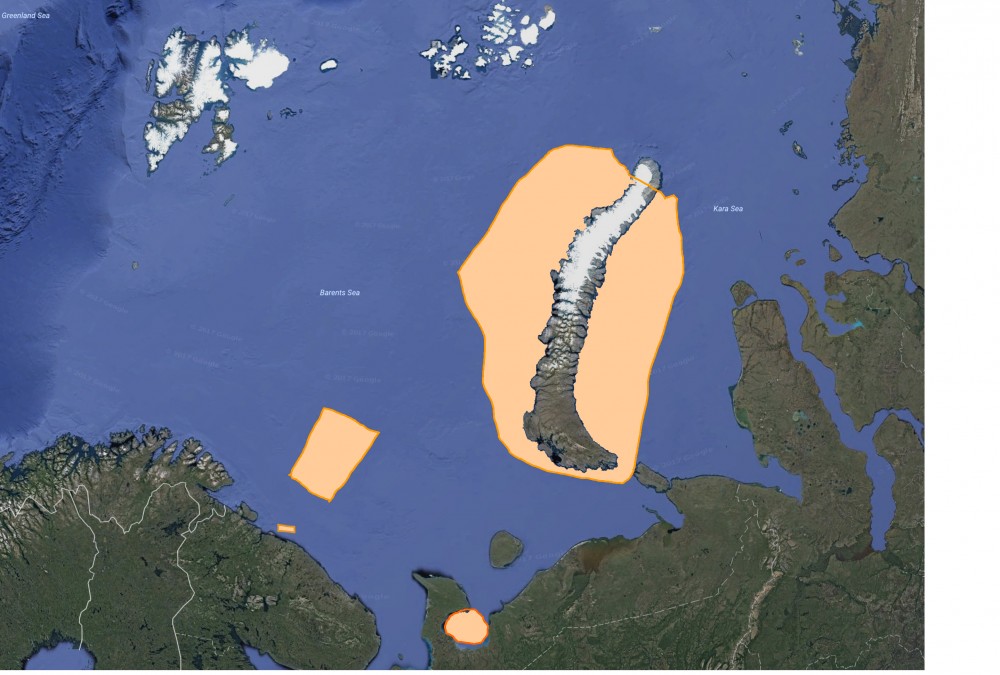 The drawings are made by the Barents Observer based on coordinates from the Port administration for northwestern Russia. Map: Google Earth

Russia’s puts ban sailings around Novaya Zemlya for a ten days period and in the Barents Sea from now and until Sunday.
Read in Russian | Читать по-русски
By

The Port Administration for Northwestern Russia has issued several navigation warnings for larger parts of the eastern Barents Sea and Kara Sea. All warnings read «Missiles shooting» and are posted on the portal of the agency.

The warnings are for different dates within the period from Tuesday October 17th and last until October 30th.

The warning regarding the costal waters just northeast of the Kildin Island north of Murmansk, followed by a warning for the same dates further north in the Barents Sea is typical for a submarine launched intercontinental ballistic missile (SLBM). Such test-launchings are normally done submerged, either from a Delta-IV class or a Borei class submarine.

Both the Northern Fleet’s six Delta-IV submarine and the Borei submarine  «Yury Dologuky» are based in Gadzhiyevo on the coast of the Kola Peninsula, a few hours sailing from the area east of Kildin marked on the map.

The larger sealed off area in the northern part of the Barents Sea is where the first stage of the missile is separated and fells to the sea before the rest of the missile enters orbit on its way to the target on a shooting range on the Kamchatka Peninsula in the Far East.

Similarly, when sailing restrictions are announced for the waters in the Chosha Bay, east of the Kanin Peninsula, another SLBM is likely on its way in the opposite direction. Launched from one of the Pacific fleet’s Delta-III or Borei class submarines towards the Chizha range on Cape Kanin. Such trans-Arctic criss-cross ballistic missile tests are carried out several times in recent years when Russia is exercising its strategic nuclear rocket forces.

Both warnings indicating ballistic missile testings are valid for the 10 days period October 20th to 30th.

The only information attached to the agency’s civilian warning is «Missiles shooting».

Similar warnings like the ones issued by Russia’s civilian port administration, are also to be found on the public portal of the U.S. National Geospatial-Intelligence Agency. Here, the two warnings regarding the Barents Sea for the period October 20th to October 30th are listed and marked with «Hazardous operations» and «Missile operations». The coordinates are similar to the ones published in Russia.