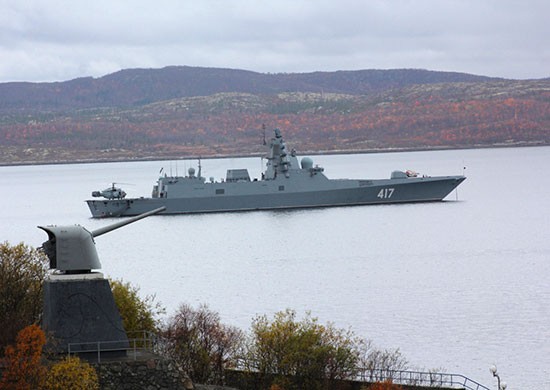 A new frigate and a big landing vessel are about to join the ranks of Russia’s most powerful fleet after more than a decade of construction and testing.
Read in Russian | Читать по-русски
By

The last phase of testing is in the process with Russia’s first new frigate, the «Admiral Gorshkov». The ship is currently sailing in one of the the training areas of the Northern Fleet, Navy Deputy Head Commander Viktor Bursuk told TASS.

It will be officially handed over to the Northern Fleet in the course of the year, Bursuk confirms. It is the biggest Naval vessel built in Russia in almost two decades.

The 4,500 ton big «Admiral Gorshkov» is the first ship of project 22350, the country’s new generation of frigates. It is 135 meters long and designed to perform multiple roles. It is able to execute long-range strikes, conduct anti-submarine warfare and to carry out escort missions.

Testing of the «Admiral Gorshkov» has been comprehensive. The ship underwent tests in the White Sea already in fall 2015.

At least eight vessels of the kind are projected. The Northern Yard in St. Petersburg is currently building three of them, the “Admiral Kasatonov”, the “Admiral Golovko” and “Admiral Isakov” .

Construction of the «Admiral Gorshkov» started already in 2006 and the ship was originally to be ready for duty in year 2012.

At the same time, testing of another soon-to-be Northern Fleet vessel is close completion. The 5,000 ton heavy landing ship «Ivan Gren» is expected to be included in the Navy in December.

Coinstruction of the «Ivan Gren» was started already in 2004. It is part project 11711. One more ship of the kind is planned built.