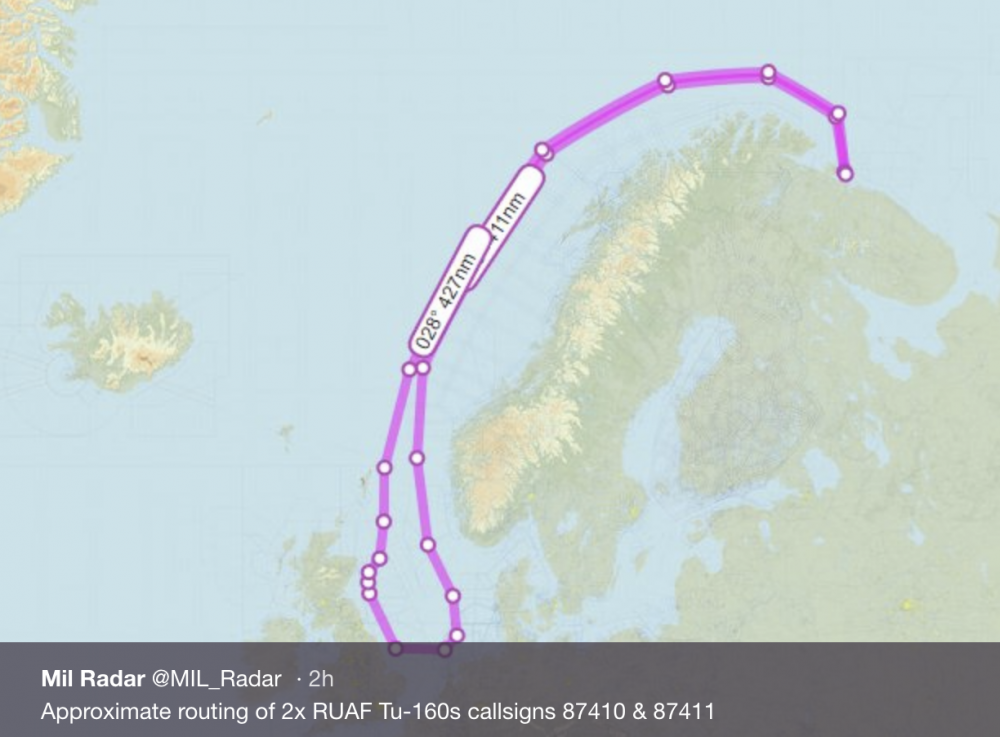 The estimated route of the two Russian strategic bombers flying out from Russian airspace north of the Kola Peninsula on Monday. Screenshot of tweet from @Mil_Radar

Early Monday morning, two Tu-160 strategic bombers took off and headed north towards the Barents Sea from north of the Kola Peninsula. From there, they were flying all along the coast of Norway and continued to the North Sea.

Press spokesman Lt. Col. Ivar Moen with the Joint Head Quaters says to the Barents Observer that it was considered to scramble Norwegian fighter jets from both Bodø and Ørland air stations, but the wind was too strong.

«We had wind up to 50-60 knots from north of Finnmark to Stadt [on Norway’s west coast]. Also, the direction of the wind was challenging. It was not safe to take off,» Moen says.

«But we followed them by other means and there were no indications that the [Russian] aircrafts were heading towards Norwegian air space,» Ivar Moen elaborates.

«They were flying in a distance from our air space,» he says but will not detail the distance. Over the North Sea, the bombers turned north and followed the same route towards the Barents Sea and Russian air space.

Flying at 40,000 feet, wind conditions for the two TU-160s could be very different from near ground.

The blog site Mil Radar, known for keeping track of military aircrafts in northern Europe, has estimated the route of the two Russian bombers and posted the it on twitter.

The mission was likely part of a larger on-going Russian exercise with strategic nuclear forces.

In the course of combat training, simulated missile launches took place from mobile systems in the Irkutsk region in Siberia on Monday, Russia’s Ministry of Defense reports.

Belgium Air Force was first to inform about the Russian hypersonic aircrafts flying over the North Sea. A tweet says two Belgium F-16s «successfully interceptred 2 Russian TU-160 Blackjack bombers above the North Sea, within the Dutch area of responsibility of NATO airspace.»