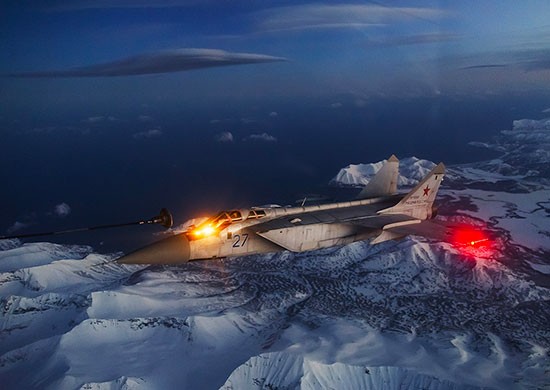 Pilots from the Russian Air Force and Northern Fleet together hunted down and destroyed simulated violators of Russian Arctic airspace.
Read in Russian | Читать по-русски
By

More than 20 aircrafts participated in the drills, the Northern Fleet informs. Among them was a group of Mig-31 interceptor planes, which was supported by four teams of Su-24 supersonic attack aircrafts.

The aircrafts belong to the air wing of the Northern Fleet, as well as to the Air Force, and the joint exercise included strikes against simulated enemy targets in the Arctic.

The exercise took place in both daytime and night time, the Northern Fleet informs. The pilots conducted independent search of violators of the country’s Arctic airspace and shot with missiles against targets.

This helps the pilots perfect their skills in complicated and high-altitude flying, a press release reads. For the crews of the Mig-31s, it helps enhance coordination and improve efficiency in intercepting and eliminating enemy air targets.

A lion’s share of the aircrafts involved in the exercise is likely to be stationed at the Air Force base in Monchegors, Kola Peninsula. The fighter jets of the Northern Fleet includes mostly Su-33s and Mig-29Ks.