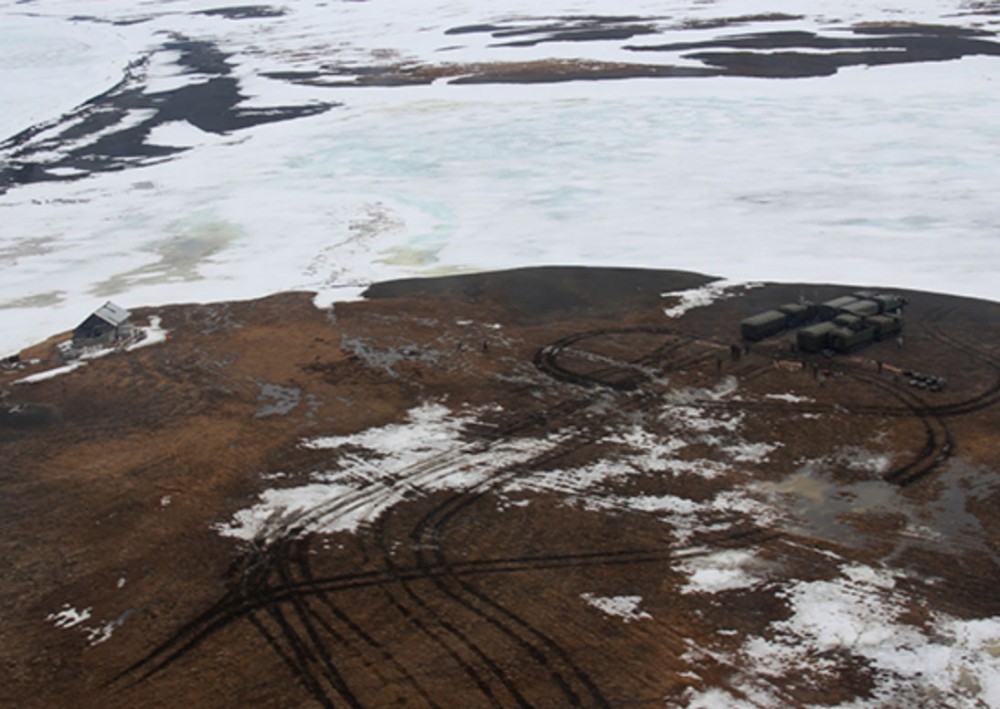 Five 30-ton heavy ATVs are making their way around the Novaya Zemlya as part of a major exploratory effort of the Northern Fleet.
Read in Russian | Читать по-русски
By

The expedition on Sunday had a break on the southwestern coast of the archipelago. Where the river Savin runs into the Kara Sea, a helicopter landed with a delivery of fuel and new-baked bread, the Northern Fleet’s press service informs.

On this very spot, explorers in year 1833 found an Orthodox cross believed to have been erected by Savva Lozhkin, the 18th century seafarer, the Northern Fleet says.

This is heavily militarized areas under strict control of the Russian Armed Forces. Few kilometers away are sites for extensive nuclear weapons testing during the Soviet period. And the secrecy of the area persists. The country’s Armed Forces are believed to continue to this day with new weapons testing in the area.

The expedition on the 6th of June set out from Rogachevo, the military airbase on the western coast of the island. The day before, the last of five Vityaz DT-30Ps was flown in with an Il-76 aircraft. The more than 30 ton heavy ATVs will take the expedition members about 850 km of through the wilderness of the southern of the two Novaya Zemlya islands. It will last more than 20 days.

About 30 servicemen from the Northern Fleet’s infantry and coastal forces are part of the team. They are among the best prepared contract soldiers and have all undergone special training in extreme Arctic conditions, the Northern Fleet says.

Of special interest are military sites and facilities built during the Second World War, as well as the Soviet period. Up to eight stops each with a duration of 2-5 days are planned. They are believed to be made on sites such as bases and infrastructure developed by German occupiers during the war, as well as abandoned Soviet post-war Navy facilities in the area.

Also several historical sites from the 19th century will be visited.

«This Northern Fleet expedition […] is aimed at studying historical experiences made during the acquisition of the Novaya Zemlya and take full advantage of this for the interests of Arctic security,» Head Commander Nikolay Yevmenov says.

The Novaya Zemlya is the biggest of Russia’s Arctic archipelagos. The lion’s share of the area is untouched and clean Arctic lands. However in parts of the southern island there is still considerable contamination from the nuclear weapons testing.