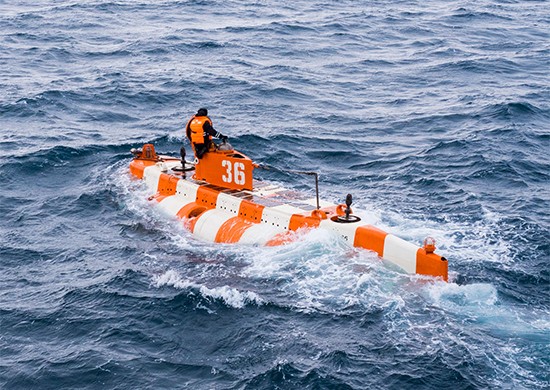 “At a depth of half a kilometre, the submariners tested the operation systems and mechanisms, performed maneuvering and worked in cooperation with the instructions from the command post on board the rescue vessel «George Titov», the press-service of the Northern Fleet informs.

The dive, which took several hours, involved both military and civilian personell.

Since the Barents Sea north of the Kola Peninsula is too shallow, the Russian navy sails further west where the Barents Sea meets the Norwegian Sea. Here, between mainland Finnmark and the Bear Island, waters are down to about 2,000 meters.

Sunday’s deep-dive is the second testing in the area for the special mini-rescue submarine AS-34. Also last year, the same submarine dived in the same area, then down to a depth of 1,000 meters.

The Northern Fleet’s red and white rescue submarine became world famous in August 2000 when it repeatedly failed to assist the ill-fated «Kursk» submarine that sank in the Barents Sea killing all 118 personnel on board. AS-34 was one of two Russian mini-submarines participating in the rescue efforts. At first attempt, the rescue sub reported colliding with the stern stabiliser of «Kursk» and had to surface to repair the damage. In a second attempt after the damage was repaired batteries were depleted before able to attach to Kursk’s escape trunk. After surfacing, waves of up to 2,4 meters made it impossible to put the sub on the sea again. Two other attempts in the days after also failed, first when AS-34 again was damaged when it struck a boom while being lowered into the sea and second when it managed to dive but failed two times to attach to the escape hatch.

Five days after «Kursk» sank, President Vladimir Putin accepted an offer from the Norwegian and British governments to assist. Seven days after the disaster the Norwegian ship «Normand Pioneer» carrying a British rescue submarine and deep-sea divers arrived and a few days later managed to open the hatch only to fine the rescue trunk full of water.

The trench northwest of mainland Norway is also used by the Russian navy’s warfare submarines for deep-sea testing and exercises. It was during deep-sea diving tests here in 1989 that the Soviet nuclear-powered submarine «Komsomolets» sank after a fire to a depth of 1,680 meters about 180 kilometers southwest of Bear Island. The waters between North Cape and Bear Island are also of key importance for the Northern Fleet’s submarine sailing out on patrols to the North-Atlantic.