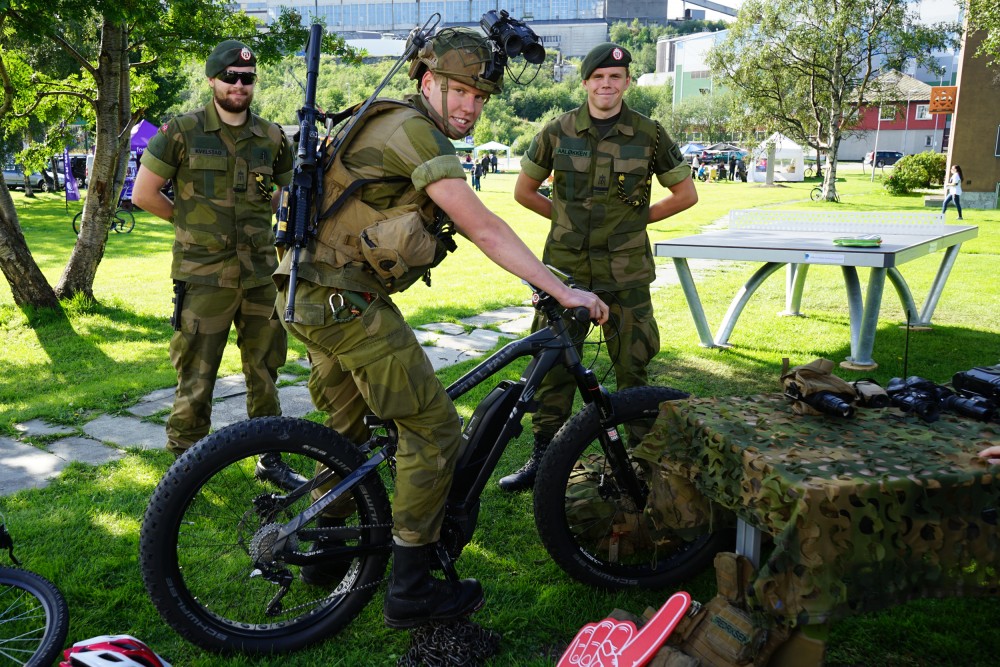 The Norwegian soldiers guarding the border to Russia is the world’s first military unit to use electric all terrain bikes.
Read in Russian | Читать по-русски
By

Most part of the 196 kilometers long Norwegian-Russian border goes through rough terrain along the river banks of Pasvik and Grense Jakobselv and across remote mountains far away from normal roads.

The Garrison of Sør-Varanger (GSV) has for since Norway became a Schengen member some 15 years ago patrolled the the border with Six-wheel terrain vehicles during summer period and snowmobiles in winter.

A challenge, though, is the size and weight, not least to talk about the predictability a noisy six-wheeler cause if searching for an illegal border-crosser in the wilderness.

Now, the green-uniformed soldiers are testing electric bikes, as the first military unit to do so anywhere. Not only because of the greenish eco-friendly image, but for checking out both possible practical and tactical benefits.

«We are testing the bicycles’ technical characteristics  and how they fit to our border guards concept,» says Lieutenant Colonel Jørn Qviller, commander of the Garrison.

«We have long distances to patrol. Such means of transport can cover large areas and move quickly,» he tells to the Barents Observer. The electric all terrain bikes are now for testing and although positive experiences so far, Qviller doubts they will substitute all other means of transport for the border guards. «This will not be a vehicle we could use for the entire border guard job.»

The Lieutenant Colonel continues: «We believe the operational benefits are significant, but just as one of many tools we should have in the future.»

«They make substantially less noice and our experiences are that both people and animals get very surprised when we suddenly approach them in the border areas,» Jørn Qviller tells.

The electric bikes have powerful batteries, that last for a while, depending on terrain and temperatures. For the border guards, special training is needed and good maintenance of the bikes are required.

The bikes run smoothly over rough and uneven terrain. Also, and unlike the six-wheel ATVs, the bikes leave few trails or tear up the fragile northern taiga nature.

Very few migrants have managed to make it into Europe by crossing in the terrain. Though, the latest year has seen a significant increase in illegal attempts by migrants to cross the border, but all have been arrested by Russian border guards before reaching the borderline itself.