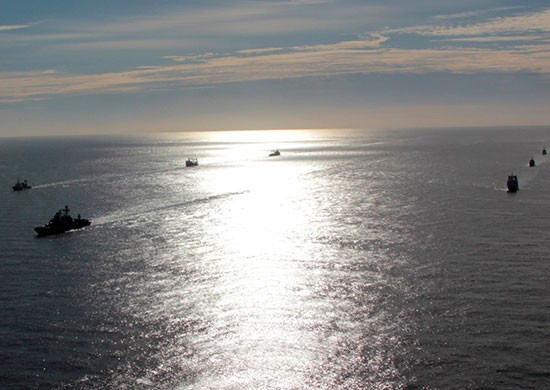 A group of at least eight ships sails into east Arctic waters at the same time as a major unannounced drill unfolds in Russia’s Eastern Military District.
Read in Russian | Читать по-русски
By

Minister of Defense Sergey Shoigu on Tuesday announced the drills and the region’s military units subsequently rolled out their hardware and took positions. That includes the nuclear submarines based in the Pacific base of Vilyuchinsk, the Armed Forces say.

The unannounced rehearsal will last for five days and comes as preparations for the Vostok-2018, the biggest military drills reportedly held in the country since 1981. The Vostok-2018 includes also Chinese and Mongolian forces and is due to start in late August.

At the same time, as the forces in the Russian east engage in combat training, enforcements are coming in from the west. The Northern Fleet informs that its flotilla of  at least eight vessels have sailed into the Laptev Sea. Included in the group are anti-submarine vessel «Vice-Admiral Kulakov» and big landing ships «Aleksandr Otrakovsky» and «Kondopoga». Also icebreaker «Ilya Muromets», tanker «Sergey Osipov», tug «Pamir», hydrographic research vessel «Gorizont» and crane ship «KIL-143» are part of the voyage.

The ships earlier this week had a stop-over in Dikson, the town on the coast of the Taymyr Peninsula, where they engaged in an exercise on crisis resolution and protection of economically important objects, the Northern Fleet informs.

Several exercises are to be held also in the Laptev Sea.

The ships are likely to proceed eastwards to the new Arctic bases developed by the Navy. Among them are the Kotelny base in the New Siberian Islands, and the bases in Wrangel Island and Cape Shmidt. Ice conditions in the area remains complicated and the Northern Fleet vessels are accompanied by nuclear icebreaker “50 let Pobedy”.