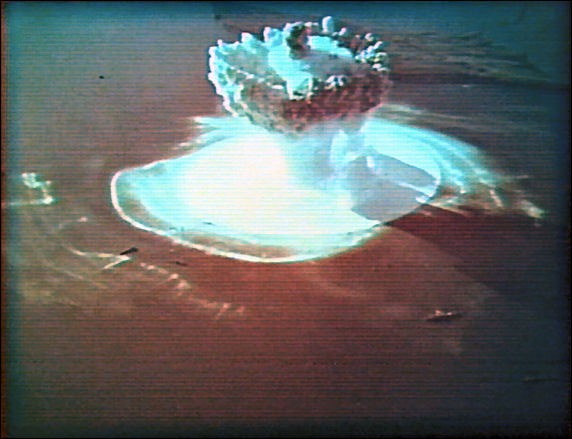 It was early morning 10th October 1957 when Captain Georgy Lazarev slowly sailed his «S-144» submarine into the quiet waters of the Chernaya Guba to conduct the first ever launch of a nuclear torpedo. More than 60 years later, his devastating blast is honoured with a monument on site.
Read in Russian | Читать по-русски
By

It was a deadly arms race going on and the Soviet Union was intensely developing its nuclear weapons program and conducting high-risk testing.

Georgy Lazarev was only 37 years old, but already among the most experienced submariners in the Soviet Navy. He had served in the Northern Fleet during the 2WW and in 1948 completed the Frunze Naval School in Leningrad.

But he had never been close to executing an order similar to the one he got in early fall 1957.

Lazarev and his crew had in May that same year first been ordered to sail from the home base of Polyarny near Murmansk to Severodvinsk. There, a local shipyard had strengthened the vessel’s torpedo compartment. Then, the submarine was ordered to set course for Balushya Bay in Novaya Zemlya.

The mission was top secret and none of the crew members, including Captain Lazarev himself, knew about their assignment, ship navigator on board the «S-144» Igor Murzenko recalls.

All through August and September the submarine crew conducted comprehensive preparations in Novaya Zemlya, in the area of the Balushya Bay and the nearby Chernaya Bay, Murzenko reveals in conversations made with Professor Georgy Kostev.

The information is widely referred to in an article published in online military news journal VPK.

Soviet authorities had in July 1954 decided that Novaya Zemlya, the Arctic archipelago situated between the Barents Sea and Kara Sea, would become test ground for nuclear weapons. Hectic subsequent developments took place on site. Only about 14 month later, a first testing with a nuclear-armed torpedo model T-5 was conducted. That, however, did not include a launch from a vessel, but only the submerging of the torpedo into the water and subsequent detonation.

It was only in 1957 that the T-5 was ready for real shooting. In April that year, the Soviet Council of Ministers had issued a secret decree that ordered test firing of nuclear weapons on surface and underwater, including with torpedoes, in the area.

The T-5 had been engineered in the early 1950s and final testing without ammunition reportedly took place in the Ladoga Lake near St Petersburg immediately prior to the operation in Novaya Zemlya.

Captain Lazarev had an utmost systematic approach to his work and he paid great attention to the younger officers, he patiently listened to their assessments and points of view, Lieutenant-navigator Igor Murzenko says about his former boss.

They were serving on board a powerful vessel. The «S-144» had been in service since 1953. It was one of the first submarines of project 613, in NATO countries referred to the Whiskey-class. The 76 meter long diesel-engined attack submarine could hold a speed of 13,1 knots in submerged position and the weaponry was far more deadly compared with previous subs.

Commander Lazarev early in the morning 10th October 1957 got the instructions he had been waiting for: he was to sail to the Chernaya Bay and there from submerged position launch the nuclear torpedo. There was no specific target. The torpedo was simply to explode in the middle of a group of vessels placed in the area. A total of ten vessels, among them four submarines and three destroyers, were on site, the closest only 240 meters from the detonation point. The weapons developers wanted to study the effect of the detonation on nearby vessels.

It was absolute silence in the command post of the «S-144» as the clock approached 10 that morning. Then came the launch, and then again silence. Only the ticking seconds of the timer device could be heard, Igor Murzenko recalls. Then, on 9 o’clock 54 minutes, 32 seconds, the torpedo detonated. The depths were 30 meters and a powerful shockwave soon afterwards hit the «S-144».

«It was like crisp, almost metallic, knock on the ship, as if someone was lashing huge and heavy chains on the hulls,» Igor Murzenko describes.

The «S-144» was located about 10 km from the site and Captain Lazerov could through the periscope see a huge vertical column of water and subsequent fire mushroom.

However, instead of leaving the area, the sub was instructed to sail to the middle of the detonation point. Several people, among them both Lazarev and Murzenko entered the bridge as the vessel reached the site. But they quickly returned back inside when they turned on the dosimeter which showed overwhelming radiation.

All the vessels that had been within a radius of 500 meters from the detonation were destroyed and sunk. Several of the other vessels got serious damage, but some of them were considered still fit for sailing and continued service after the blast.

The «S-144» itself returned to Belushya Bay and a week later sailed to Liinakhamari, the port in the Kola Peninsula located only few kilometers from the border to Norway. There, the ship was decontaminated. Later, it returned to its base in Polyarny. However, also the «S-144» had got damage from the blast in Chernaya Bay and was never again used as attack submarine. After 1957, the vessel was rebuilt and subsequently served as training target, Professor Georgy Kostev writes.

Captain Lazarev was released from duty and moved to St.Petersburg where he got a post in the Naval Academy.

None of the sailers involved in the operation had knowledge about the level of radiation to which they had been exposed. They had been told by their superiors that underwater detonations posed no threat to their health. However, several of the crew members of the «S-144» later experienced otherwise.

The situation was worst for the crews of the ships that had been used as targets in the Chernaya Bay. These sailors had viewed the explosion from the nearby shores and later, many of them sailed the same vessels back to their original bases.

The archipelago of Novaya Zemlya was subsequently intensively used as test area for the Soviet Union’s nuclear weapons developers. A total of 224 nuclear- and thermonuclear tests were carried out in the area, the last two on October 24, 1990.

As the remote Arctic lands of the Novaya Zemlya today again attract increasing attention from the Russian Armed Forces, the memory of heroes from the 1950s and early 1960s is brought to the forefront.

In July this year, the Northern Fleet conducted a major expedition in the Novaya Zemlya, including in the areas around Chernaya Bay. In that connection, the expedition members laid the foundation for what will become a memorial monument for the submarine commanders that executed nuclear torpedo testing.

On the monument will be listed the name of Georgy Lazarov and three other sub commanders; Nikolay Shumkov, Gennady Kaymak and Fyodor Kupriakov, the Northern Fleet informs.

The shooting was part of the exercise named «Coral». Also Gennary Kaymak was part of that exercise. On the 20th of October, he became the first ever to fire a nuclear missile that hit a target on the land surface of the Novaya Zemlya. Kaymyk was commander of the  «K-102», a project 629 submarine («Golf»-class).