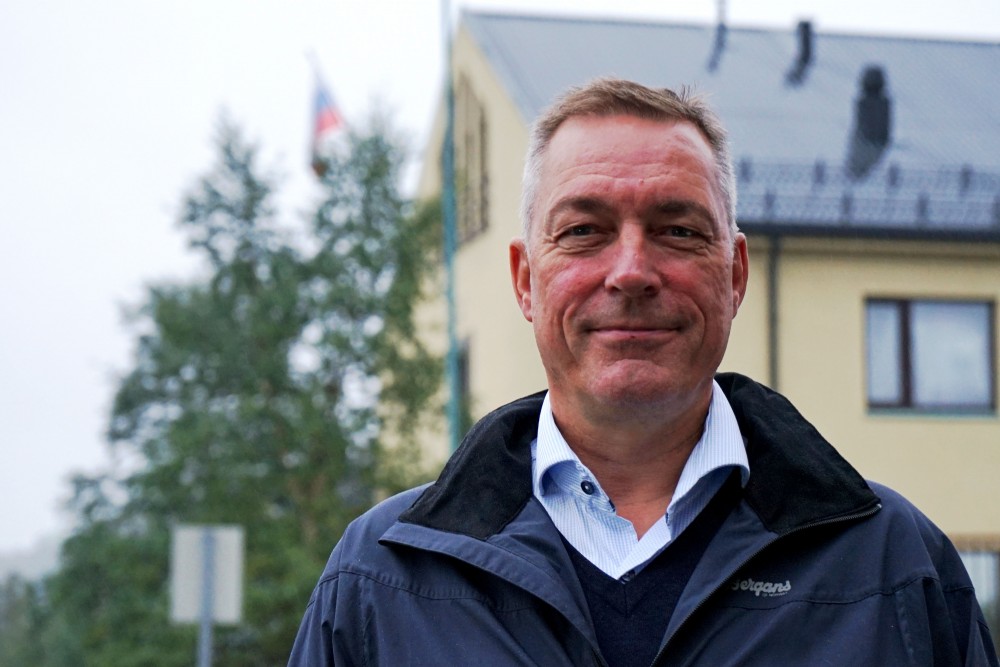 Minister of Defense Frank Bakke-Jensen with the Russian Consulate in Kirkenes in the background. Photo: Thomas Nilsen

Norway’s Defense Minister Frank Bakke-Jensen is clear: Our contact is good. We still have a direct line to Russia’s Northern Fleet.
Read in Russian | Читать по-русски
By

Speaking with the Barents Observer in Kirkenes, a few kilometers from the border to Russia, Bakke-Jensen answers “yes” when asked if the testing of new weapon systems, like the allegedly missing nuclear-powered cruise missile in the Barents Sea, is a reason to worry.

“But,” the Defense Minister continues, “we are geographically part of a nuclear weapons nation’s strategic area and has been so since Second World War. We have to take that into account.”

Russia has a large porsion of its submarine based nuclear ballistic missiles at bases about 100 kilometers from Norway’s border. In the Arctic, Novaya Zemlya is today the only range for testing nuclear-weapons, although such tests have been only sub-critical tests after the breakup of the Soviet Union.

It was last week media reports claimed a nuclear-powered cruise-missile was lost at sea during a test-flight last winter. The missile was launched from Novaya Zemlya, some 800 kilometers northeast of Norway.

Frank Bakke-Jensen will not jump to conclusions, and underlines it is not clear if it actually is a nuclear-powered missile, like the one Vladimir Putin bragged about in in speech to the nation in March, that is missing.

For NATO member Norway, keeping a good eye and awareness on what happens in the High North is very important.

“Most important for us is to have a good situational awareness, something we use big resources on. New surveillance planes, sailing more in the north and we are more present in the north,” Bakke-Jensen says.

By 2022, five new P8A Poseidon maritime surveillance aircrafts will operate from Evenes air base in Northern Norway. Frigates are sailing the Barents Sea, including annual port-calls to the Arctic archipelago of Svalbard.

Do we see more tensions in the north?

“No, it is not higher tensions. We still have a direct line to the Northern Fleet. In other areas there are good climate for cooperation,” Bakke-Jensen says. “But, increased activities makes us work even harder to maintain a better situational awareness.”

The Defense Minister says snap-drills, like the one Russia’s Northern Fleet kicked off in the Barents Sea in June, does not help making the situation in the High North stable. “But, we know that they do that from time to time,” Bakke-Jensen says and underline Norway’s goal of being predictable and inform about military exercises.

In late October, NATO’s large-scale exercise Trident Juncture takes place in southern Norway. With some 40,000 soldiers and 10,000 vehicles, the exercise will be the largest conducted by NATO since 2002. The first shipload with allied equipment arrived last weekend to Åndalsnes, Western Norway.

The exercise will have an Article 5 (collective defense) scenario.

Russia, like all OSCE nations, is invited to send observers, but Minister Bakke-Jensen says he doesn’t know if Moscow has replied to the invitation yet.