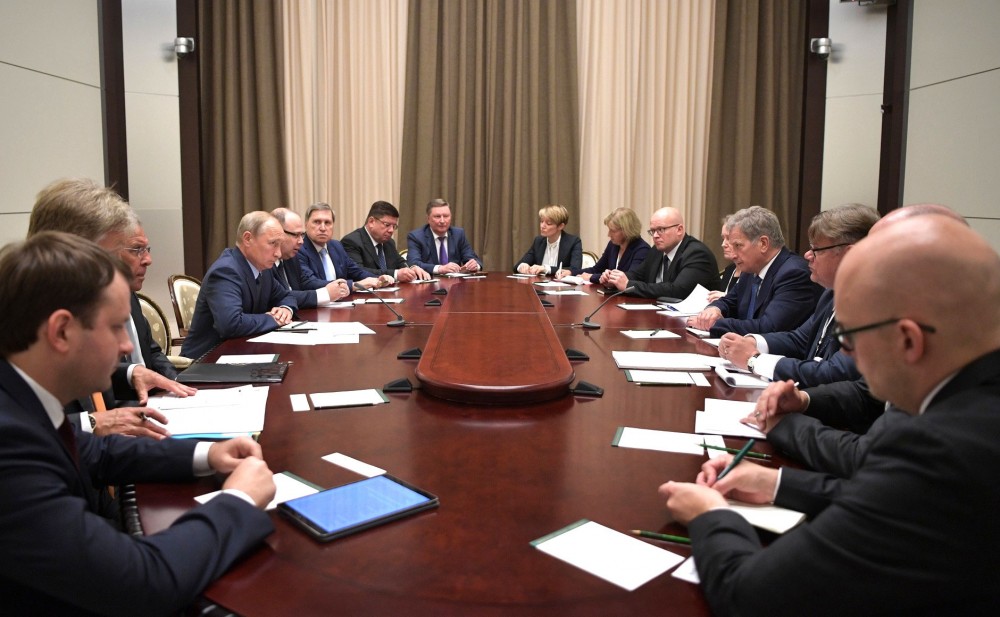 The language turned sour as soon as the two presidents touched on the role of NATO and an upcoming major allied exercise.
Read in Russian | Читать по-русски
By

The talking went smoothly when the state leaders described their conversations on Arctic cooperation, climate change and environment. Putin confirmed his support for Finland’s bid to hold a major Arctic summit as part of its running chairmanship of the Arctic Council. And he called for joint efforts in promoting search, rescue and safe shipping in Arctic waters.

But judging from video footage from yesterday’s press conference, there had recently been serious talks in the back premises. In the room were a number of ministers and high-ranking officials from both sides, and their faces all looked stern and gloomy.

The meeting between Putin and Niinistö took place in Sochi, just few hundred kilometers away from the Azov Sea, the area where Russia now is accused by Ukraine for blocking access to all non-Russian ships. The situation in southeastern Ukraine was one of the agenda issues in the meeting between the presidents.

However, in yesterday’s press conference there were other issues that seemed to be the ones that raised tensions.

In July this year, Russian Minister of Defense Sergey Shoigu made clear that the increasingly close cooperation between Finland and NATO now forces Russia to take countermeasures.

In a comment on that issue, Vladimir Putin underlined that his country is closely following the situation and that it will «strengthen its infrastructure.» He especially lashed out against   what he said was a buildup of troops and weaponry along the border and a growing number of exercises in the area.

«There are held more and more exercises, and now there is a very big NATO exercise in the making right here, in our immediate vicinity, including in the Baltic region,» Putin said, a transcript from the press conference reads.

«We have to react to the fact that there along our borders, in our immediate proximity, appear elements of American anti-missile defense systems.»

The meeting between the Finnish and Russian presidents comes just few weeks ahead of the major NATO exercise Trident Juncture that will be held near Trondheim in Norway. More than 40,000 participants from more than 30 countries will take part in what is the biggest allied military exercises in several years.

Finland will be an active participant in the drills and contributes with about 2,000 persons from all services of its Defence Forces. The Finnish Army units participating in the exercise will include an infantry company from the Pori Brigade and the company will train as a part of a Swedish brigade, the Finnish Armed Forces informs. The Nordic country will also send several Navy units and 1-2 foreign flight detachments will be operating from the Rovaniemi air base, northern Finland.

It is a thorn in the eye for the Kremlin, which continue to see the neighboring neutral country as possible bridge for Russian influence.

Finnish President Sauli Niinistö is carefully seeking to balance between conflicting interests, and during the press conference made clear that he «had not encountered any critical words against Finland during his visit».

He added that he finds it important that «we all work for enhanced mutual understanding in the world», and that this was his approach to the current visit.

In July, Ninnistö facilitated the top meeting between President Putin and Donald Trump. Before that, the chiefs of staff of the two countries, Mr Valery Gerasimov and Joseph F. Dunford Jr, met for talks in Helsinki.

At the same time, Niinistö continues to move his country closer to the North-Atlantic Alliance and makes no doubt that Finland has the sovereign right to choose allies. «Like any country with respect for itself, we take use of the best possible ways for self-defense,» he underlined in the Sochi press conference.